The Atlas of the Real World: Mapping the Way We Live

Cartogram by Danny Dorling - Total Population
So, here we have something new and different: a book review by a guest blogger, GM Culp!  Thank you for contributing to the random notes: geographer-at-large blog!  Nice review, and of course, we LOVE Danny Dorling!
The Atlas of the Real World: Mapping the Way We Live,
by D. Dorling, M. Newman and A. Barford
Reviewed by GM Culp, 02.19.2011
Chances are that while surfing information design or geography blogs you’ve encountered graphics similar to the one above. Perhaps you’ve seen one in poster form on the wall of the GIS lab or in the New York Times.  This cartogram is by Daniel Dorling, Professor of Human Geography at the University of Sheffield.  Although Dorling did not invent this form of presenting geographic data (hand drawn cartograms started appearing in the mid to late 1800s), he can definitely be credited with popularizing it among the data visualization set.  Back in the 1960s, Waldo Tobler developed a method utilizing the root mean squared error of unit densities to generate cartograms with a computer. 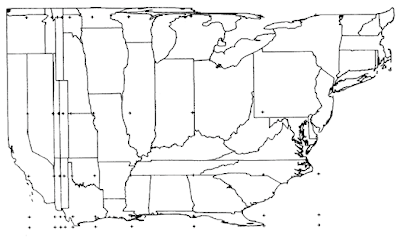 Dorling’s cartograms are created using a method developed by two physicists, Michael Gastner and Mark Newman, and is based on principles behind the diffusion of fluid.  This software and datasets are available gratis from Dorling’s website [http://www.worldmapper.org/].
I received the revised and expanded edition of Dorling’s The Atlas of the Real World  (co-authored by Mark Newman and Anna Barford) as a holiday gift from my mother-in-law (along with two Toblerone candy bars…clever and delicious).  I must admit that prior to reading this text I was a bit put off by cartograms.  The idea of distorting land area seemed like a bad idea… particularly in an era when geographic illiteracy is commonplace among American school children.  [See the geographic literacy “quiz” and alarmingly sad results at: http://www.nationalgeographic.com/roper2006/]
I was also a bit perplexed by Dorling’s Easter egg color palette.  All this and more is explained in the book’s introduction.  Dorling justifies the cartogram’s warping of geographic space by pointing out that all projections distort.  We live on a spherical planet thus some bending and stretching must take place to create a flat map.  The color palette was actually quite thoughtfully chosen.  Europe is represented by various shades of purple, the Americas by blues, Africa by greens and Asia by ochres.  The colors are different enough to allow users to easily identify areas in what are often severely distorted maps.  The palette is also used to color code the accompanying graphs.  Many of the data used comes from the World Bank and various United Nations programs.  The Atlas of the Real World is heavy, both physically and metaphorically.  There are 382 maps ranging in topics from poverty to deforestation to deaths from preventable diseases.  It should come as no surprise that the United States is one of the wealthiest nations [162] and also a top consumer of resources [343, 344, 348, 349] with the greatest military spending [310], number of prisoners [323], arms exports [311] and nuclear weapons [313].  Our ecological footprint is the largest [354] and we have the extinguished the greatest number of species [355].  While we are eating McDonalds [076], 48% of Bangladeshi children are underweight [175].  There are quite a few surprising and interesting tidbits, too.  Did you know that Monaco has 25,641 meters of road per square acre [052] or that Sweden generates over 7500 kilowatt hours of nuclear power per person [062]?  The majority of the world’s 150 million atheists live in East Asia [382] while 97% of spiritualists reside in South America [380].  Dorling’s cartograms are tragically beautiful.  Consider the map People Killed by Drought [303] where Africa is so distorted it resembles a lady slipper orchid or People Killed by Volcanoes [302] where one might mistake South America for a bouncing beach ball.  The Atlas of the Real World is an important volume and would be a welcome addition to any human geography, cartography, environmental justice, or information design library. 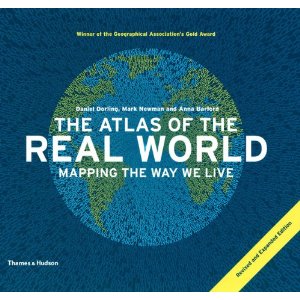