One Month with the Geographer-at-large: it's been fun! 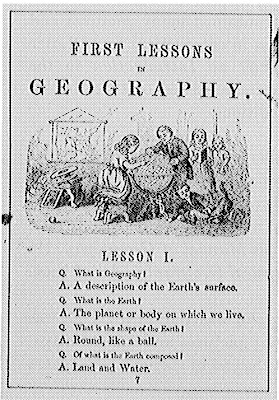 A page from Monteith’s First Lessons In Geography, 1854.  Note the Question and Answer format of the instruction.  From “Old Textbooks: Spelling, Grammar, Arithmetic, Geography, as taught in the common schools from colonial days to 1900,” by John Alfred Nietz, 1961.
So, this is exactly the one month anniversary of my blog, and I have to say, it’s been fun.  It’s very liberating for me to write about whatever I want, whatever interests me at the moment.  And it’s very different than academic writing.  (Thanks be to g-d!)  So it looks like I will probably continue this for a while - whenever life and work permit me the time.  I have learned a great deal about the art and craft of blogging since starting this blog, and have tried to incorporate some of what I’ve learned into the postings as I’ve gone along, but probably won’t change the format of this blog too much from what you see here: improvements by tweaking, as opposed to massive overhauls.
I was surprised by the interest the blog has generated, and apparently it is read or has been at least looked at once or twice, by lots of people I don’t know, as well as by many of the people I informed about the blog and who have kindly taken a look.  In one month I had about 1,600 page views, which is not at all bad for just starting out, I suppose.  Although some of the page views were undoubtedly from bots and web crawlers, I like to think that most of them were actual live people.  And they were from all over the world!  That part was very exciting to me!  So all you blog viewers “from foreign,” thanks for making my life more interesting!
As you can see from my little Mollweide projection map widget on the right, the blog had visitors ring in from Brasil, Canada, Cayman Islands, Germany, Jamaica, Japan, the Philippines, South Africa, Singapore, Ukraine, U.K., and various places in the U.S., from Florida, California, Michigan, Maryland, Virginia, New Jersey, to upstate New York, and every borough of NYC, especially da BRONX!  The U.S., of course, furnished the bulk of the page views, with the U.K. a strong second, and Singapore (of all places! I don’t know a soul in Singapore!) third.  Most of the viewers came via Internet Explorer, with Firefox and Chrome a distant second and third.  Most used the Windows operating system, but also lots of Mac users, some Linux, other Unix systems, and a few stalwarts with their iPhones and Blackberries.
Over the past month, the favorite postings (based on numbers of page views) were (in descending order): The Year in Maps (Part 4); Freedomland: a Theme Park Shaped Like a Map!; Kodachrome and the Great Depression; and the African Burial Grounds: Update and Reflections.  My wish for the coming months of postings is that more people will comment on the blog – it would be nice to have a dialogue rather than be putting stuff up there in a vacuum.  But, hey, a vacuum is good, too!
So, thanks for reading my blog at the one month mark.  And especially thanks to all my friends, students, and family who have contributed good website links, interesting maps, or just cool ideas and conversation about geography.  Yours, The Map Monkey
PS – Regarding the textbook page from an old Geography book up on the top of this post - I intend to write a post VERY SOON about the evolution of geography textbooks and how geography has been taught in American schools over the years.  I have some wonderful antique geography texts, mainly high school level, from 1898 until about 1948.  Of course, that overview will end at or shortly after WWII, because (at least in the U.S.) geography was no longer taught as a separate subject in primary or high schools, and was just about moribund in colleges, too, until the great quantitative revolution of the 1960’s.  Stay tuned!
Posted by Map Monkey at 10:15 PM