Mapping the History of Poverty 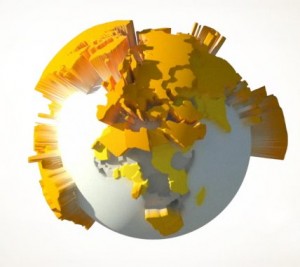 “Poverty has fallen faster over the past 50 years than in the previous 500.  But 1.2 billion people still live in extreme poverty.”  From http://www.povertyover.org/
Mapping the History of Poverty (and some other cool socio-demographic mapping projects)
This is an informative and innovative interactive map that lets you see an animated timeline of countries, showing when (and if) they transitioned out of poverty, as well as the degree of their development (symbolized by color intensity).  You can also tilt the map and see the poverty/development data symbolized by height, higher representing an increased degree of development. http://www.povertyover.org/
Check out Cuba!  It is one of the few countries that rises and falls, most others just rise as time goes by, or stay flat.  See if you can pick out a few other anomalous ones that go back and forth in development status.
I’m not sure that I like the way that “development” is seen as the opposite of “poverty.”  As if those are the only two choices!  And that increasing development (however THAT is defined!) is the solution to poverty! The "growth is good" mentality, regardless of how that can possibly be sustained in even the short-run,  is what is sending this world of ours into the downward spiral. Not to mention the often-overlooked fact that if everyone in the world had the standard of living that we in the US, Canada, and western Europe enjoy, the earth would run out of resources in about 3 months.   But I’m not going to get all hung up on semantics – the concept of the map and the data are pretty interesting. 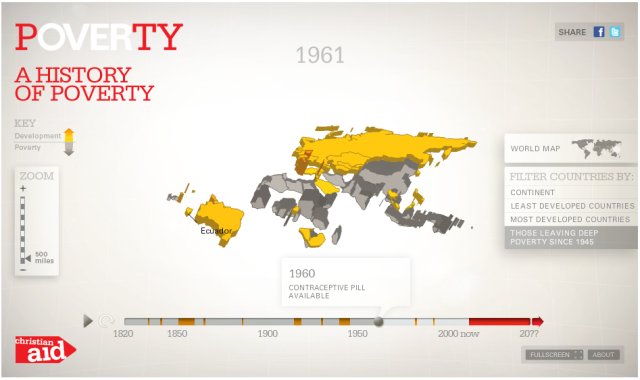 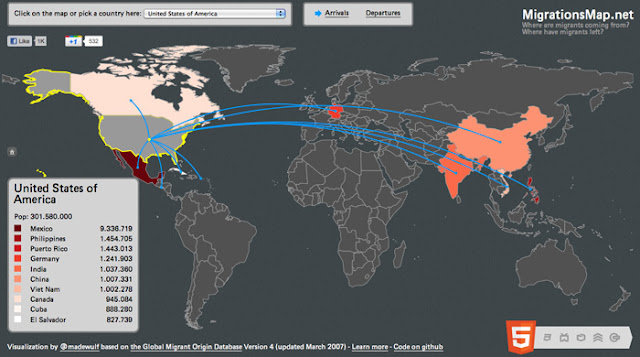 Where are migrants coming from? Where have migrants left?
Another very interesting demographic website is: http://migrationsmap.net/  This interactive map shows you, for any given country, in flow map format, where people who are migrating OUT of the country are going TO (“Departures”), and conversely, where people who are migrating TO the country are coming FROM (“Arrivals”).  They also quantify the populations on the move.  The basis of these maps is something called the Global Migrant Origin Database, and you can download the actual spreadsheets used, and read about the methods and limitations in the construction of the database at: http://www.migrationdrc.org/research/typesofmigration/global_migrant_origin_database.html
Also, view more detail about the database in a World Bank Discussion Paper at: http://econ.worldbank.org/external/default/main?pagePK= 64165259&piPK=64165421&theSitePK=469372&menuPK= 64166093&entityID=000016406_20070306151900
Population Pyramids, 1950-2050
This is extremely cool!  View pop pyramids for individual countries, as well as world regions and globally, looking back to 1950, and projected forward to 2050, in 5-year increments.
http://populationpyramid.net/
Population pyramids are one of the best ways we have to explore the basic demographic structure of a place – they provide us with information on age cohorts, male/female ratios, and in most cases, absolute numbers of various population sub-groups.  According to Wikipedia, “a population pyramid, also called an age structure diagram, is a graphical illustration that shows the distribution of various age groups in a population (typically that of a country or region of the world), which forms the shape of a pyramid when the population is growing.  It typically consists of two back-to-back bar graphs, with the population plotted on the X-axis and age on the Y-axis, one showing the number of males and one showing females in a particular population in five-year age groups (also called cohorts).  Males are conventionally shown on the left and females on the right, and they may be measured by raw number or as a percentage of the total population.”  From: http://en.wikipedia.org/wiki/Population_pyramid 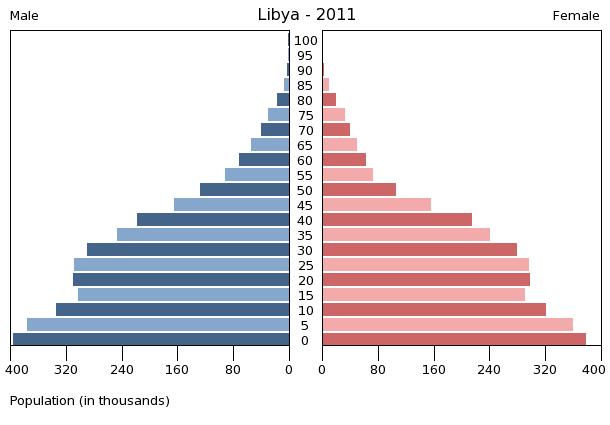 Example of a population pyramid from the Stage 1 “expanding” population category.  Nearly half of Libya’s 2011 population consists of youths under age 20.
From: http://en.wikipedia.org/wiki/Population_pyramid
America’s Demographic Opportunity – the Demographic Dividend 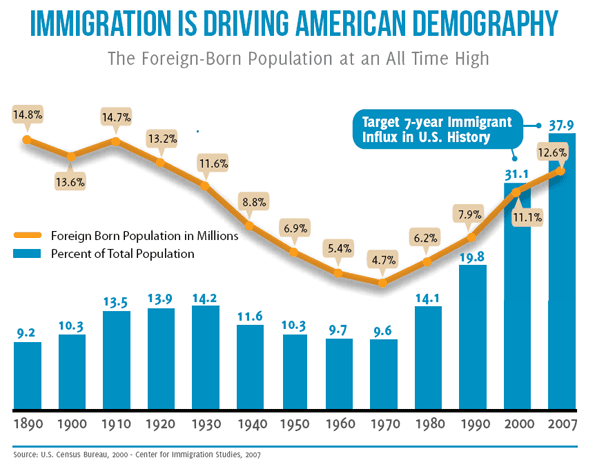 And as an important aside to the population pyramids, many of the more affluent countries are currently in the position of having “contracting” populations (the last stage in the demographic transition model, the last of the generic population pyramids).  This means that there are more people at the upper reaches of the pyramid (older populations, living longer) than there are younger ones.  This has serious implications for those nations where this is occurring, in terms of economic growth, employment, taxation, innovation, support for the elderly, and future development.  An interesting blog posting from New Geography recently detailed what this might mean for some of those contracting nations (Japan, Italy, etc.) and why the U.S. is not quite as badly off in terms of population numbers skewed toward the elderly.  I had sent this link around to those on my Listserv, but I include it again here, even though there are parts of it that I don’t agree with (as I rarely do with most of the New Geography posts! Especially their pro-urban sprawl tendencies).  Nevertheless, it is worth a read. BTW, notice how in the graph above, the legend and the symbols are shown incorrectly (they are reversed).  This was pointed out to me by an observant Jon Jenkins.  Thanks Jon, for your gimlet editor's eye for detail!  I looked at this graph dozens of times (and carefully, I thought!) and never noticed the error.  Of course, the little "%" symbols next to the numbers make the meaning clear, but STILL!  Shame on New Geography or whomever put these graphs together originally! 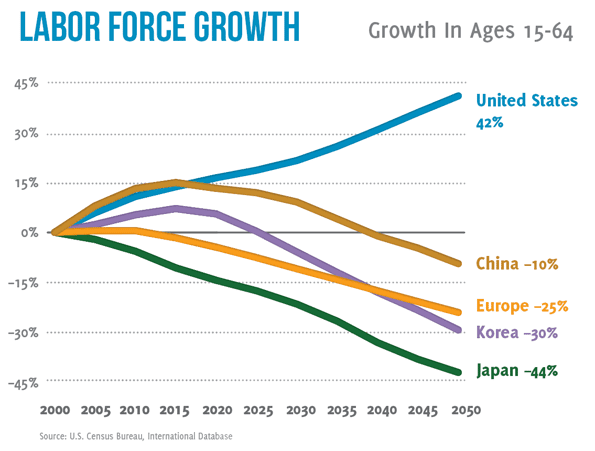 “Among the world’s major advanced countries, the United States remains a demographic outlier, with a comparatively youthful and growing population.  This provides an unusual opportunity for America’s resurgence over the next several decades, as population growth elsewhere slows dramatically, and even declines dramatically, in a host of important countries.” From: http://www.newgeography.com/content/002492-americas-demographic-opportunity?utm_source=feedburner&utm_medium=feed&utm_campaign=Feed%3A+Newgeography+%28Newgeography.com+-+Economic%2C+demographic%2C+and+political+commentary+about+places%29

The Spread of Immigrant Groups in the U.S. 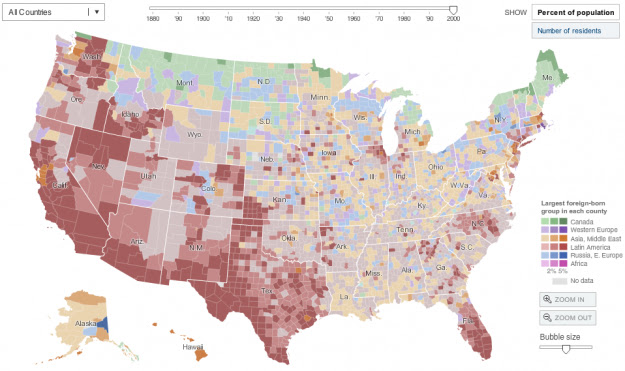 And another really nice one on U.S. immigrant groups and their spread across the United States.  http://www.nytimes.com/interactive/2009/03/10/us/20090310-immigration-explorer.html
You can select specific nationalities or regions of origin, and the map changes from a multivariate choropleth to a proportional symbol map. You can also adjust the "bubble" size to see the detail better.  Thanks, Kristen Grady, for sending the link


Life expectancy across the U.S. / Global BMI and Diabetes
American women live an average of 2.5 years longer than men, but as life expectancies vary across the country, both men and women in certain counties, particularly in the South and Southeast, can expect to die more than a decade sooner than others.  See interactive map, where you can get data by county, at http://www.washingtonpost.com/wp-srv/special/nation/life-expectancy-map/
Thanks, Urban Demographics, for the link.  On the same page, there is another link to an animated scatterplot showing how global BMI (Body Mass Index) has changed for men and women, 1980-2008, as a metric for cardiac risk. You can look separately at each nation, also.  Weight of the World:  http://www.washingtonpost.com/wp-srv/special/health/weight-of-the-world-bmi/
Another tab on that page shows Diabetes worldwide and for each nation.


Bottom of the Heap
And, lastly, a sobering look at social justice in various nations around the world.  The United States, one of the overall richest countries in the world, is very low on the charts.  What does this say about the so-called "American Exceptionalism"?
Table from: The New York Times, http://www.nytimes.com/imagepages/2011/10/29/opinion/29blow-ch.html?ref=opinion
from the editorial "American's Exploding Pipedream by Charles M. Blow at http://www.nytimes.com/2011/10/29/opinion/blow-americas-exploding-pipe-dream.html?nl=todaysheadlines&emc=tha212
"The differences in the prevention of poverty and access to educational opportunities are immense in the OECD.  The northern European countries are best of all at providing for equal opportunities for achievement. At the same time, many continental European and Anglo-Saxon states have considerable catching up." from the report at http://translate.google.com/translate?hl=en&sl=de&u=http://www.bertelsmann-stiftung.de/&ei=dh2rTqy2KsLh0QGgtJWPDw&sa=X&oi=translate&ct=result&resnum=1&ved=0CCIQ7gEwAA&prev=/search%253Fq%253Dhttp://www.bertelsmann-stiftung.de%2526hl%253Den%2526client%253Dsafari%2526rls%253
These (the successful nations) are the very countries that some of our would-be leaders in the U.S. deride as dangerous socialist welfare states.  Meanwhile, we (the U.S.) are literally at the bottom of the heap, just slightly above Greece, Chile, Mexico, and Turkey.  We are in the lowest category, "the bottom five," for Pete's sake!