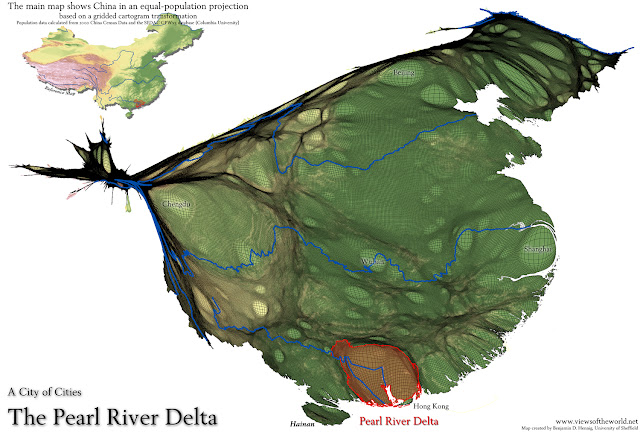 The equal-population map shows a gridded population cartogram in which every grid cell is resized according to the total number of people living there.  From: http://www.viewsoftheworld.net/?p=1738
Thanks, Kristen Grady, for sending me the cartogram!


Many of you (and ALL of you who have had a GISc class with me!) probably know by now that I LOVE cartograms.  And I have been a huge fan of Danny Dorling and his Cartogram Factory for years (and by “Cartogram Factory” I am not alluding to some Dickensian assembly line of cartogram makers, but something more akin to Andy Warhol’s Factory of unique and cutting-edge creativity, but maybe minus some of the decadence!).
Cartograms, or value-by-area maps, are a very innovative type of thematic map whereby the geographical areas are depicted not by their actual geographic size (as is usual on most maps) but are sized by a function of some ancillary variable, such as population, GDP, or life expectancy, for example.  In other words, the variable to be mapped is substituted for land area in showing the size of the geographical units.  According to the “Cartogram Central” website of the University of California at Santa Barbara, http://www.ncgia.ucsb.edu/projects/Cartogram_Central/types.html there are three types of cartograms: contiguous, non-contiguous, and Dorling.  See Danny Dorling’s World Mapper website at http://www.worldmapper.org/  and also see Gretchen Culp’s review of the book Atlas of the Real World: Mapping the Way We Live, by Dorling, Newman, and Barford, at http://geographer-at-large.blogspot.com/2011/02/atlas-of-real-world-mapping-way-we-live.html 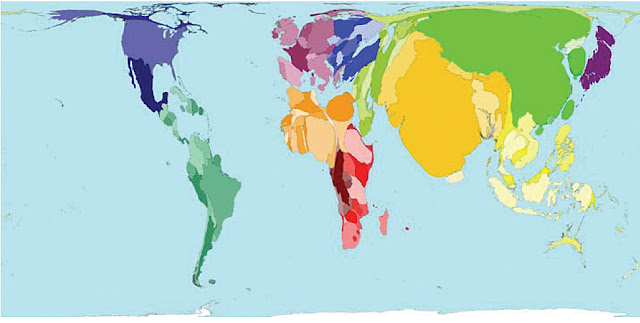 WorldMapper's World Population Cartogram based on national level data, from  http://www.esri.com/news/arcuser/0110/cartograms.html
One of the potentially problematic issues with cartograms is that in order for the map viewer to correctly interpret the cartogram, s/he has to be familiar with the original geography of the mapped area.  If not, then the re-sizing of the units of analysis based on the ancillary variable (in the case of the map above, by population) will be meaningless.  This is one of the oft-cited drawbacks of cartograms, and I suspect, one of the main reasons why they haven’t become as widely-used as choropleth maps or dot density maps.  This drawback can be at least partially mitigated by including a map of the standard geography of the mapped area as a kind of a “locator” or reference map, which becomes even more important when the geography in question is likely to be poorly understood by the map viewer.  The map of China shown here does just that, making it easier for those not very familiar with China’s geography able to discern the areas of high population concentrations, and where there are relatively smaller populations.
A few months ago, I wrote a post about the newly emerging mega-regions, one of which was the Pearl River Delta area in China. http://geographer-at-large.blogspot.com/2011/02/megaregions-is-this-our-future.html  This mega-region was being touted as potentially the largest city conglomeration in the world, with over 40 million people.  The British Telegraph Newspaper stated: “China is planning to create the world’s biggest mega city by merging nine cities to create a metropolis twice the size of Wales with a population of 42 million.”  http://www.telegraph.co.uk/news/worldnews/asia/china/8278315/China-to-create-largest-mega-city-in-the-world-with-42-million-people.html
The map above was created to counter, or at least temper, some of the hysterical buzz surrounding this story.  The cartogram’s creator, Benjamin D. Hennig of the University of Sheffield’s SASI group, says “This map makes the plans of a more integrated Pearl River Delta region more understandable, and perhaps slightly less exciting for those who interpreted the news as the creation of a new megacity, rather than the logical step in connecting an already populous region.” http://www.viewsoftheworld.net/?p=1738
See the SASI post and slide show on creating gridded population maps at Re-Mapping the World’s Population in ArcUser and Slideshare http://www.viewsoftheworld.net/?p=701
See their PDF of creating cartograms for data visualization at http://www.viewsoftheworld.net/data/ArcUser2010_hennigetal.pdf

As shown in the two world population maps above, there is a big difference in mapping data at tha national level versus at the sub-national level using the gridded approach.