Map of North American English Dialects, from http://aschmann.net/AmEng/#LargeMap4Right The map at the website has links to audio files of people speaking in the dialect.  Thanks, Kristin Grady, for sharing the link with me.
Some of this blog’s regular readers (and of course those who know me personally) are aware of my affection for, and interest in, regional accents, dialects, patois (or patwah, as we say in Jamaica) and all the little speech idiosyncrasies that differentiate speakers of a particular language and give clues as to where the speaker originally hails from, (or in some cases, where they attended school!).  I don’t know anymore if we can, like Sherlock Holmes was able to do, place a man within ¼ mile of his home just by listening to a few sentences of his speech, but there still are remarkable differences in spoken English in America.
This interactive map of North American English regional dialects, (which I admit is more than a bit over-cluttered, and probably not the greatest map, cartographically speaking, but in its defense, it IS trying to portray some very complex information) delineates areas of common regional speech patterns and accents.  It also gives links to actual audio examples of that accent as spoken, and summarizes some of the major trends in the dialect (i.e., letting us know where the word “pen” does not equal “pin,” and “caught” does not equal “cot,” and conversely, where the words are pronounced identically.  Or where “on” rhymes with alternately either “Don” or “Dawn,” which is apparently a big north-south divide.)
One very fascinating portion of the map deals with how many vowel sounds are present in each dialect.  Apparently, New York City can claim to have the most spoken vowels of any North American English dialect, with 16 distinct ones!  In New York-ese, “bad” does not rhyme with “had,” as it does in most other parts of the country.  We say “Baad.”  My great-grandmother, Maggie Barnacle, actually used to pronounce “bread” with the extra long open “a,” too, like “Braad.”  Other American dialects have only 13 or sometimes 14 distinct vowel sounds.
Another interesting thing this map shows: the closest to the classic New York City dialect is the one they speak in downtown New Orleans, Louisiana.  Having spent quite a lot of time in New Orleans years ago, I had noticed that, too, and always wondered about it.  Sometimes I would get into a taxi in New Orleans, and ask the driver what part of New York he was from originally, until I caught on that was the way they spoke down there, too, and in all likelihood the driver had never been north of Lake Pontchartrain!  It seems amazing to me that in this one tiny part of the south, totally surrounded by the very recognizable classical lowland southern dialect spoken in most of the rest of Louisiana, eastern (gulfcoast) Texas, Mississippi, Alabama, etc., that there would be some remnant New York-type accent.  The only thing that I could think of to explain it is the fact that New Orleans, like New York City, had a similar influx and mix of immigrants in the late 1800’s and early part of the 20th century, from Ireland, Italy, Germany, etc., all of whom lent their particular accents to the local dialect, and probably in the case of New Orleans, really created the local dialect, due to the large proportion of immigrants to “locals” in the actual city area.
This is a quote from the forward of one of my favorite books, “The Confederacy of Dunces,” and it’s about New Orleans:  “There is a New Orleans city accent . . . associated with downtown New Orleans, particularly with the German and Irish Third Ward, that is hard to distinguish from the accent of Hoboken, Jersey City, and Astoria, Queens, where the Al Smith inflection, extinct in Manhattan, has taken refuge.  The reason, as you might expect, is that the same stocks that brought the accent to Manhattan imposed it on New Orleans.” 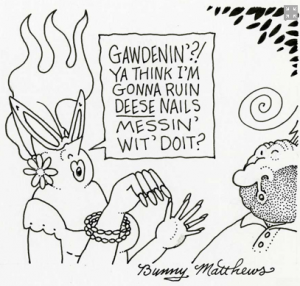 The dialect is called “Yat,” as in “Where y’at?” a common greeting, for “Where are you at?” which more or less means “How you doin?”  (The proper response to this is “Awrite.”)  Long-time (mainly white) natives of the Ninth Ward, the Mid-City area, and Irish Channel speak with a greater or lesser degree of full-blown Brooklyn-ese.  The accent now-a-days is most pronounced amongst the older population.  It also is present in residents of several of the nearby suburbs, especially those areas where working-class and lower-middle-income white people migrated to from the Ninth Ward during “white flight” in the 1960’s.  Typical of this accent are “tawk” for “talk,” “fiah” for “fire,” “terlet” for “toilet,” “klawth” for “cloth,” “ordition” for “audition,” “noice” for “nurse,” “soydinly” for “certainly,” and other pronunciations of the "deese, dat, dem, and dose" variety that you might be familiar with from watching late-night re-runs of 1930’s and 40’s gangster movies (or ones featuring Jimmy Durante!) set in NYC.   Yat = Brooklyn on Quaaludes.  See “How ta Tawk Rite” at http://www.gumbopages.com/yatspeak.html and “The 12 Yats of Christmas” at http://www.youtube.com/watch?v=da3hxKYTXKw 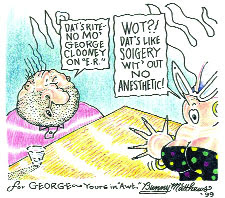 I also really like the Vic and Nat’ly newspaper comics by Bunny Matthews, set in the Nint’ Ward. Vic and Nat'ly are the Royal Family of the Yats! (from the New Orleans Times-Picayune)
In general, you are more likely to hear the New Orleans equivalent of “toidy toid and toid, and step on it!” (33rd and 3rd) in New Orleans than you ever will anymore in NYC!  I think about this everytime I go to my eye doctor, whose offices are actually ON 33rd and 3rd in Manhattan, and I snicker a little when I give my destination to the cab driver in my best Queens-ese, although most of the NYC cabbies, it goes without saying, do not speak with NYC accents these days, and so my little joke doesn’t even register with most of them. But just to show you how fluid accents can be, and how susceptible we are to listening and changing speech patterns according to situational circumstances and those around us, I heard myself asking for a "Tametable" at the Glasgow Central Station the other day.  and when I heard myself say it, I was surprised, because it certainly wasn't a conscious decision.  I also have heard myself saying "Aye" instead of "Yes" more than a few times! 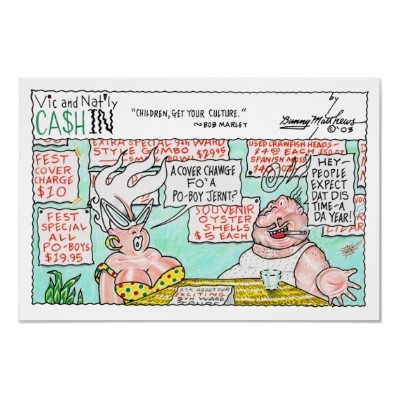