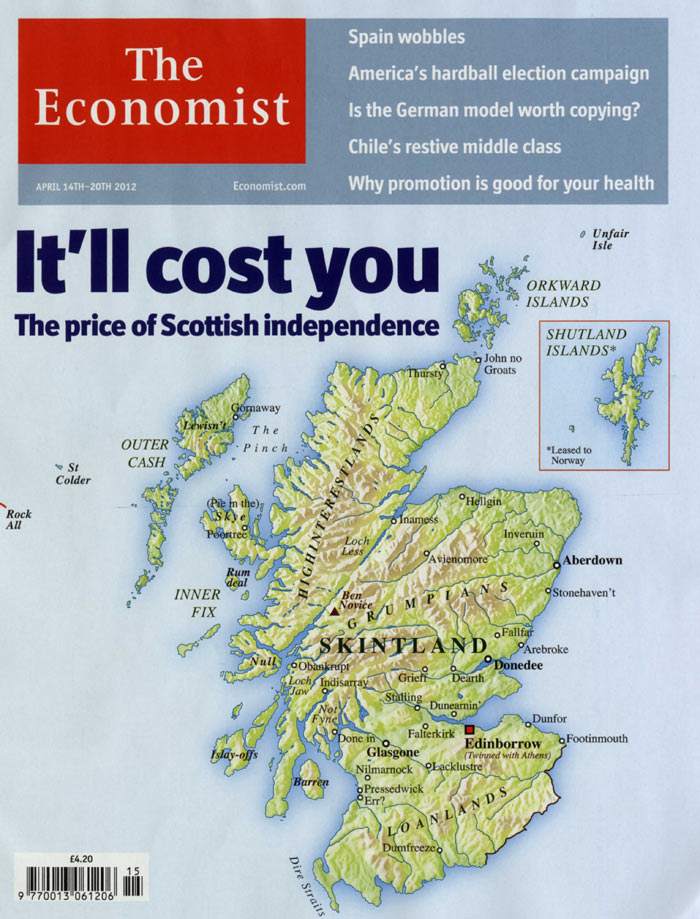 The modern version of the Scotophobic Map (from the April 14th 2012 cover of The Economist), which so many in Scotland (and elsewhere) found highly offensive and not funny at all.  Thanks to Holly Porter-Morgan and Greg Mason, who each sent me the link to the article.

Notwithstanding my recent post on (lighthearted?) ethnic and national stereotyping maps, (http://geographer-at-large.blogspot.co.uk/2012/03/map-of-week-3-12-2012the-world.html) it isn’t often that you see a “serious” map released to the public that is so blatantly biased and insensitive, especially one on the cover of a serious and well-respected publication like The Economist.  Nevertheless, there it is.
Scotophobic maps are nothing new.  They have a long, if ignominious history in the UK. According to Map of a Nation: A Biography of the Ordnance Survey, the “Scotland situation” was one of the main instigators of the military mapping endeavor that became known later as the Ordnance Survey of Great Britain, the wonderfully comprehensive and detailed map collection that hikers, tourists to the UK, residents, and map lovers everywhere revere so much.  After Scotland’s union with England in 1707 to form the United Kingdom, there was (still) a considerable amount of rebellion amongst the Highland and Island clans, and the English had a very difficult time subduing them since they didn’t know the ins and outs of the geography and had no proper maps of the area.  The Scottish clans definitely had the advantage here, and knew all the mountain fastnesses of their kingdom from which they could attack or to which they could retreat, and have a better than fair chance of being undetected by the enemy forces.  This was an untenable situation for the English – they did not relish the idea of being led around on wild goose chases over difficult terrain only to be ambushed in the end - and hence a comprehensive mapping of Scotland was undertaken, to level the playing field in their favor and remove some of the element of surprise enjoyed by the Scottish rebels.  So it was not in response to a potential invasion of their enemies from across the Channel that worried the English and prompted the military mapping, but a problem within their own realm with their own newly-minted countrymen.  These maps were termed “King George II’s Scotophobic maps” since the primary impetus for their creation seemed to be fear and dislike of the Scots. 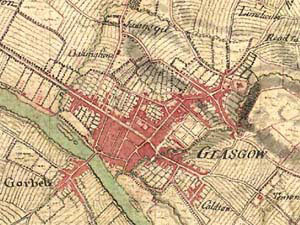 Detail of a map showing Glasgow, by William Roy, as part of the Military Survey of Scotland 1747-1755, which was primarily prepared in order to open up the Highlands to movement of military troops and equipment and for building an extensive road network to connect the new forts built by the English in Scotland, all in response to the Jacobite Rebellion of 1745-1746.  William Roy in later life worked with the famous Cassini de Thury of the Paris Observatory on the geodetic connection between Paris and London by triangulation. From http://maps.nls.uk/roy/background.html 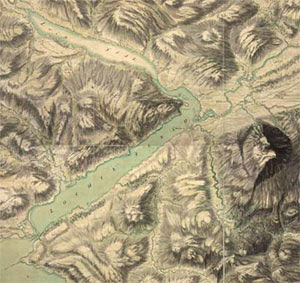 Ben Nevis mountain. Roy used a scale of 1:36,000 (one inch to 1,000 yards) and instituted the now-standard color scheme for geographic features (brown for roads, green for woodlands, blue for water, red for buildings and developed areas, yellow for cultivated fields, and buff for moors).  In these maps, they used hachurs rather than contour lines to indicate elevation, although maps produced later do include the use of contour isolines, which was a new technique at that time.  For more on the influence of Roy’s maps on future cartographic style in general and on the Ordnance Survey maps in particular, see http://maps.nls.uk/roy/style.html

Even though England and Scotland have been politically joined for over 300 years now (longer than the USA has been an independent country, by way of comparison) there is still a certain amount of separateness to these two components of the UK, which is evidenced in the culture, language, attitudes, and perceptions of the two peoples, not to mention the important differences in the physical, economic, and built landscapes.  With talk of Scottish Independence and the very real possibility of this happening at some point in the near future, the response, pro and con, has been interesting.  One of the responses has been this article and map in The Economist.
The subject of the map on the cover of The Economist is “Skintland,” aka Scotland.  All of the place names have cleverly been revised to reflect the supposed current broke state of Scotland, and the ensuing economic meltdown if Scotland becomes independent.  Edinborrow for Edinburgh, Inamess for Inverness, Loanlands for Lowlands, Highinterestlands for Highlands, Pie in the Sky for the Isle of Skye, Poortree for Portree, Null for Mull, etc.
Perhaps the most inflammatory name substitution is the one changing Arbroath to Arebroke.  Arbroath has a highly significant and even talismanic place in the history of Scotland and Scottish independence.  In April of 1320 a delegation of the Scottish Parliament (headed by the Abbot of Arbroath, who was also Scotland’s Chancellor) wrote a letter to the Pope, called the Declaration of Arbroath, which affirmed in no uncertain terms the independence of the Scots, and the right of Scotland to defend itself when attacked.  It rather controversially made the point that independence rested with the Scottish people, rather than with the King of the Scots, implying a contract of revoke-able consent between King and people, as opposed to the usual assumption of the King having a God-given right to rule.  The declaration was in response to an invasion of Scotland by Edward II of England, and its purpose was to assert Scotland’s right to exist as an independent kingdom, and to get the Pope’s support of a Scotland free of further English interference and invasion (and to hopefully get the Pope to lift the excommunication of Robert the Bruce – King Robert I - who had defended Scotland against England’s incursions).  The Pope did provide his support to Scotland, for what it was worth, and issued several Papal Bulls exhorting for peace between the two nations.  This was probably not because the Pope was such a great lover of freedom, but rather because he was interested in gaining Scottish support (and money and manpower) for the mounting of his new Crusade to the Holy Lands, which Scotland would not be able to provide if the threat of an English invasion was still in the cards.
The most famous passage in the document, and one which appears in the new Scottish Parliament building as well as written in large letters on a wall in the National Museum of Scotland in Edinburgh is “...for, as long as but a hundred of us remain alive, never will we on any conditions be brought under English rule.  It is in truth not for glory, nor riches, nor honours that we are fighting, but for freedom – for that alone, which no honest man gives up but with life itself.”

The English translation from the Latin of the famous passage from the Declaration of Arbroath, as it appears written on a wall in the National Museum of Scotland in Edinburgh
.
The predicted economic meltdown of Scotland is actually not a commonly held opinion here in Scotland, and many believe that it is England who will suffer most economically if Scotland breaks away.  But similarly to other nations where one part of the country is perceived as being an economic drain on the whole, Scotland is seen by many in England as being a welfare state and not contributing their fair share to the nation.  If you read some of the readers’ comments to the article, you will see that is anything but the case.  I am used to this sort of rhetoric in New York City: the upstate New Yorkers are always accusing us city folk of siphoning off all the state’s tax revenues to support the city’s welfare moms when in actuality it is NYC that is the prime economic generator of taxes for the state, and we don’t get back nearly our fair share in taxes from the state, compared to what we contribute.  We never should have let the state capital be located up there!  (Only kidding!  Only kidding!  I love upstate, and used to live in the Finger Lakes region many moons ago.)  But I digress.  As usual.

The Economist article that accompanies the cover map – “It’ll Cost You – Scottish Independence would come at a high price”: http://www.economist.com/node/21552564

A pretty good (and exhaustive!) rebuttal: “A Unionist Lexicon: An A-Z of Unionist Scare Stories, Myths, and Misinformation,” at http://www.newsnetscotland.com/index.php/scottish-opinion/4341-a-unionist-lexicon-an-a-z-of-unionist-scare-stories-myths-and-misinformation
This article painstakingly goes through all the possible myriad objections to Independence, and knocks them off, one by one (some more successfully than others!).  It also contains an interesting bit (about a third of the way down) on the myth of the political/geographic enclaves that might have to be formed in the Orkneys and Shetlands, whereby they would remain part of the UK.  Fascinating stuff.  It’s not every day we get to witness the possible disintegration/dissolution of a kingdom.