Map of the Week 5-7-2012:Foods of the British Isles-A Typographic Map 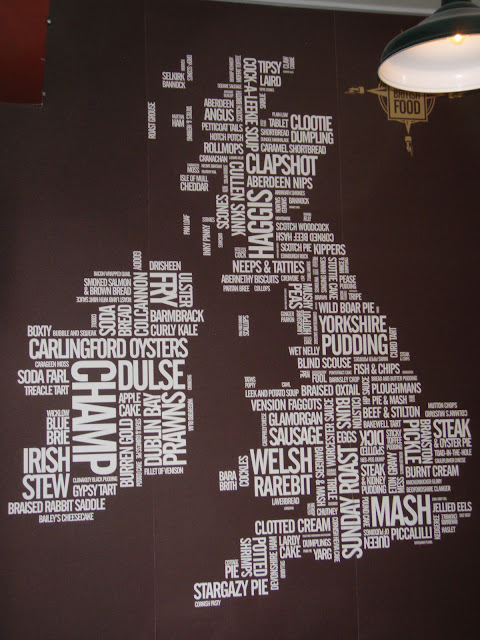 Typographic Map of Food of the British Isles, on the wall of a small restaurant in Durham, England

Typographic maps are all the rage, and I’m sure you have seen many of them.  They use typography to fill in the outlines of a country or city, or sometimes, the whole world, generally just with location names, but sometimes (as in this map) it gets a bit more imaginative. This wall-sized one I photographed in a small restaurant in Durham, England this week.  My colleagues from Durham University took me to dinner at Oldfields Real Food (on Claypath), which specializes in locally-sourced produce and fish, and they pride themselves on using traditional recipes, hence this map of regional food dishes from around the British Isles. It shows the location where the food dishes originated or are popular. You know, such staples as Bangers and Mash, Cullen Skink, Blind Scouse, Cock-a-Leekie soup, and the ever popular (at least with me and millions of Scots!) the Clootie Dumpling.  My home in Glasgow is somewhere between Haggis and Clapshot (turnips and potatoes, or ‘neeps and tatties, as they say here). Happily, I don't live anywhere near "jellied eels!"
Here are some other interesting typographic maps (not to be confused with topographic maps, or topological maps, or toponymic maps).  Some of them are quite simple, and others very intricate.  Several of the more intricate ones are the work of Paula Scher, the undisputed master of typographic maps.  Look for her excellent book called “Maps.” 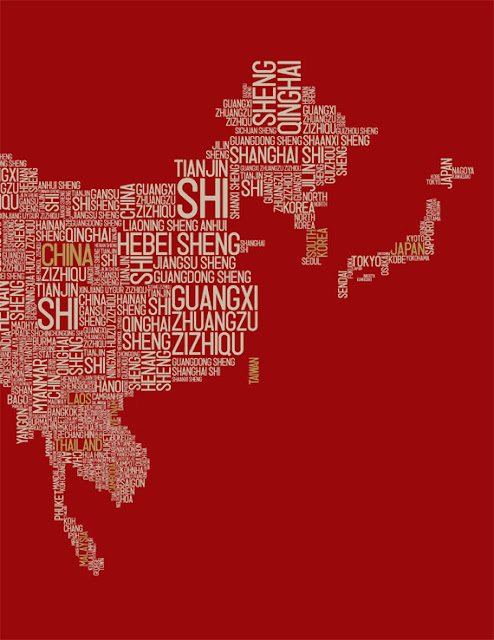 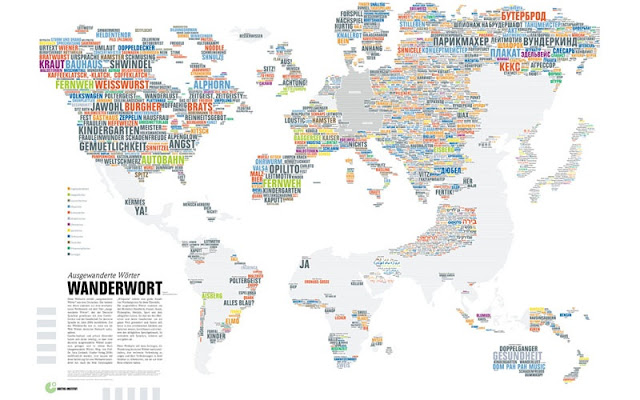 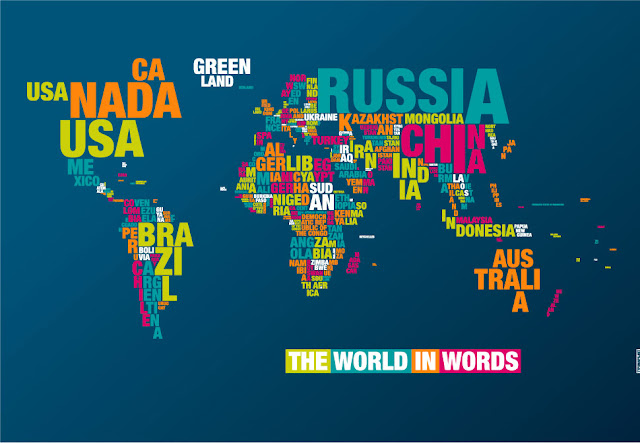 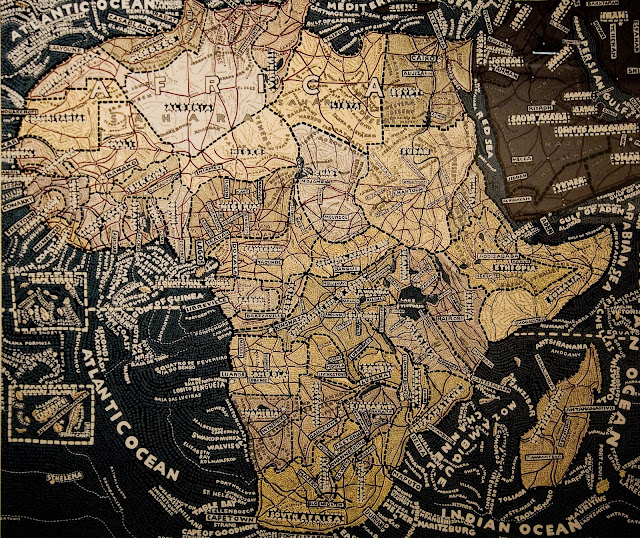 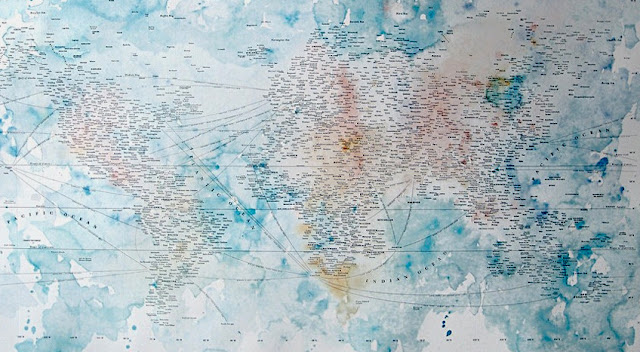 World map by Nancy McCabe.  This one is truly amazing.  For more info, see: http://flowingdata.com/2011/03/14/typographic-world-map-and-water-colors/ and also http://www.fastcodesign.com/1663407/wanted-a-typographic-map-of-the-world 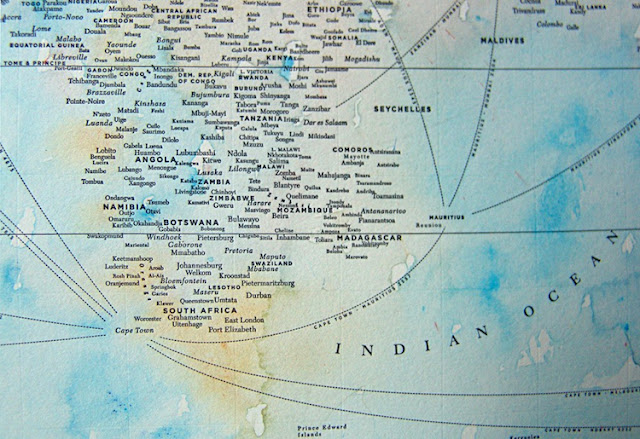 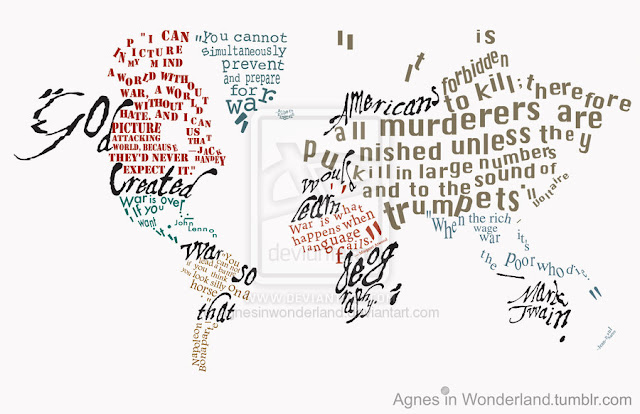 This is a really clever typographic map – the type makes up a map of the world using different quotes from famous people on an anti-war theme.  My favorite quote (naturally) is Mark Twain’s “God created war so that Americans would learn geography,” although the quote by Voltaire runs a close second: “It is forbidden to kill; therefore all murderers are punished unless they kill in large numbers and to the sound of trumpets.” 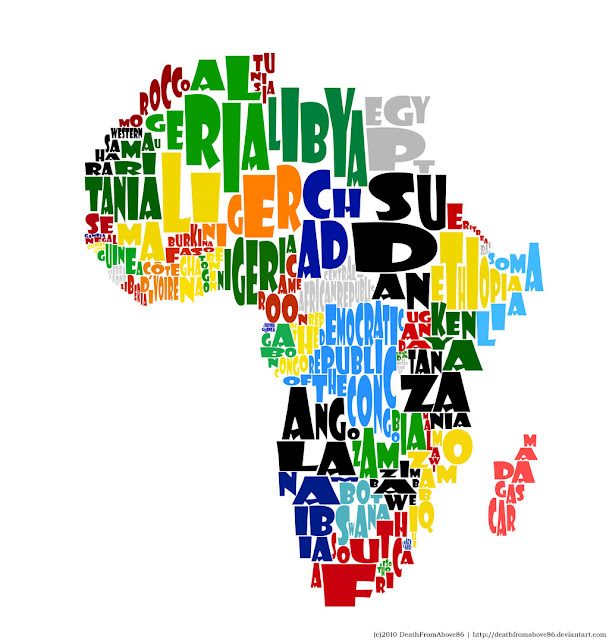 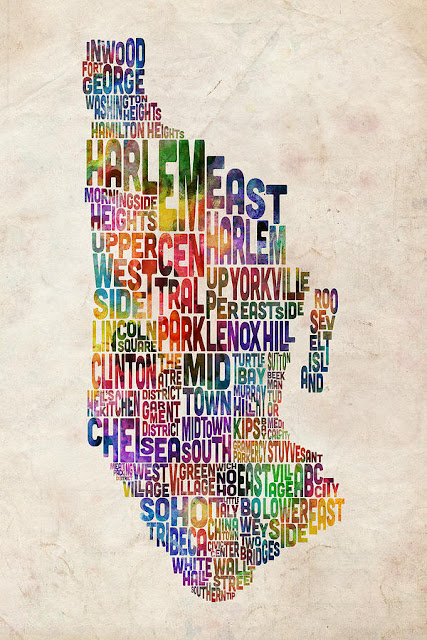 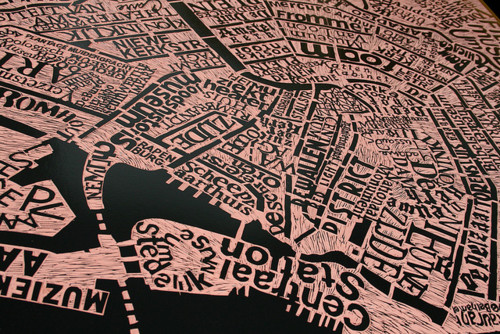 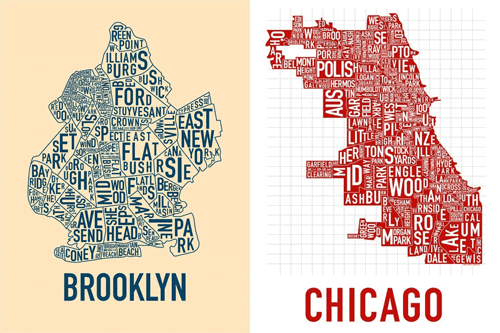 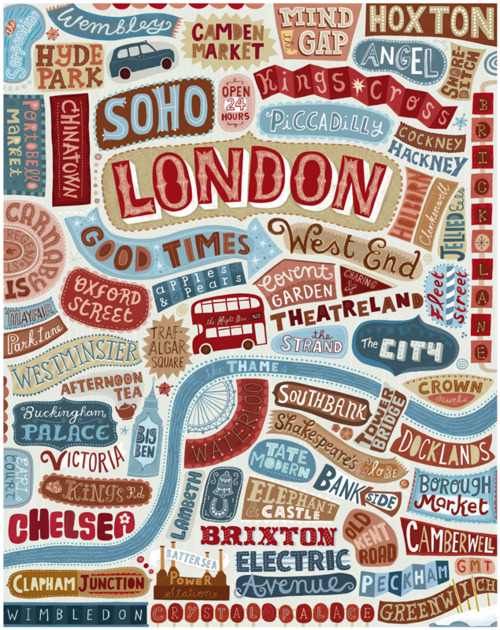 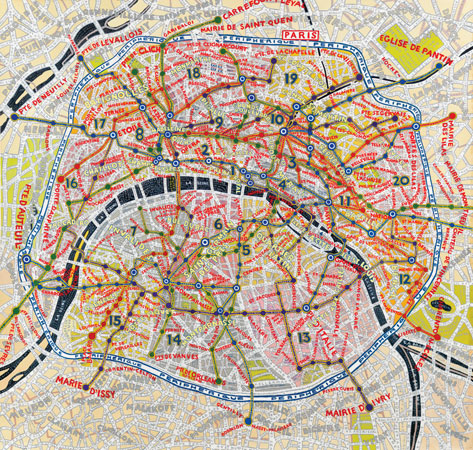 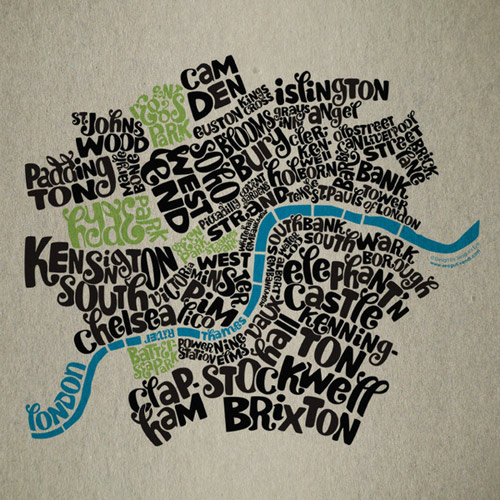 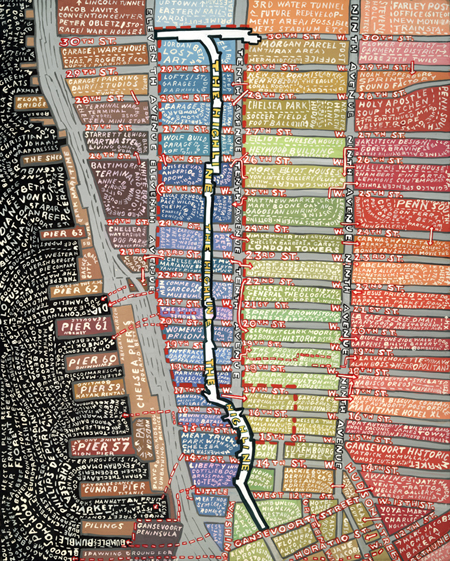 Lower Manhattan, by Paula Scher, featuring the path of the High-Line (a disused elevated freight train line, transformed into an elevated linear park). 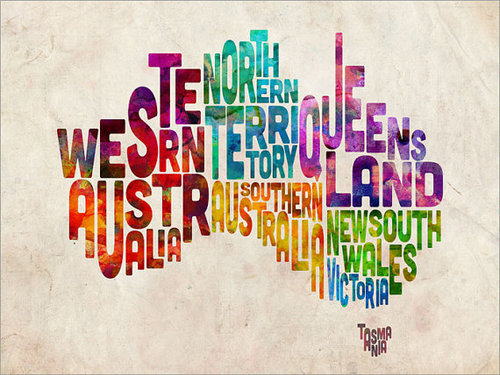 Australia - but if you couldn't figure that out on your own, I refer you back to Mark Twain's quote, above! 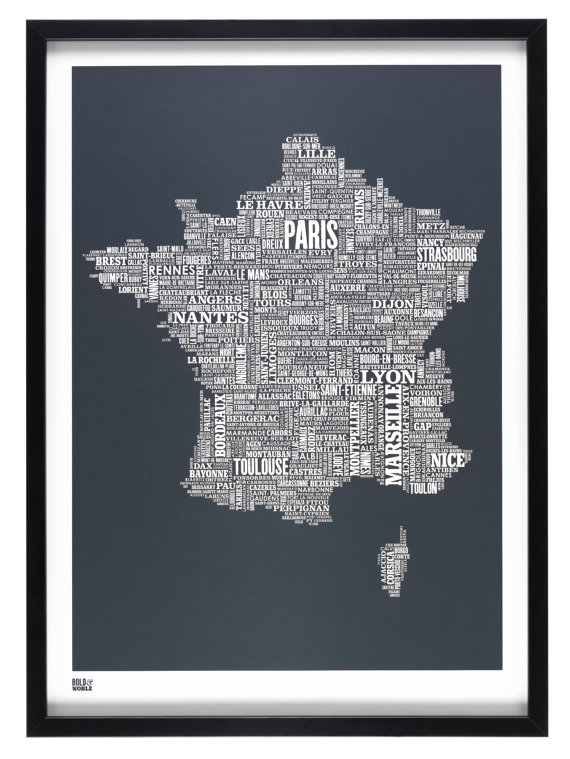 France, ditto to caption for Australia. 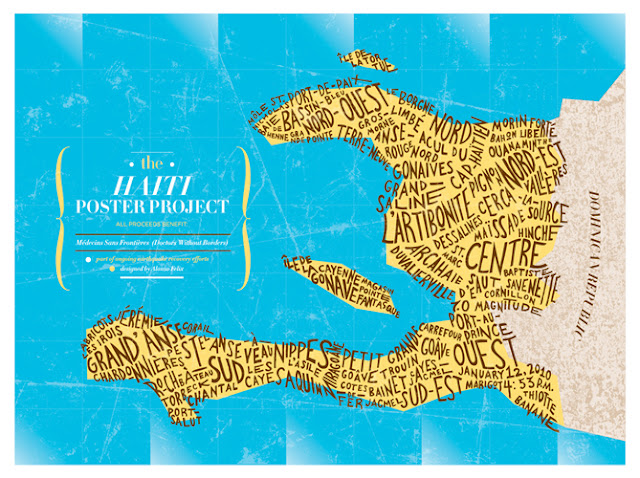 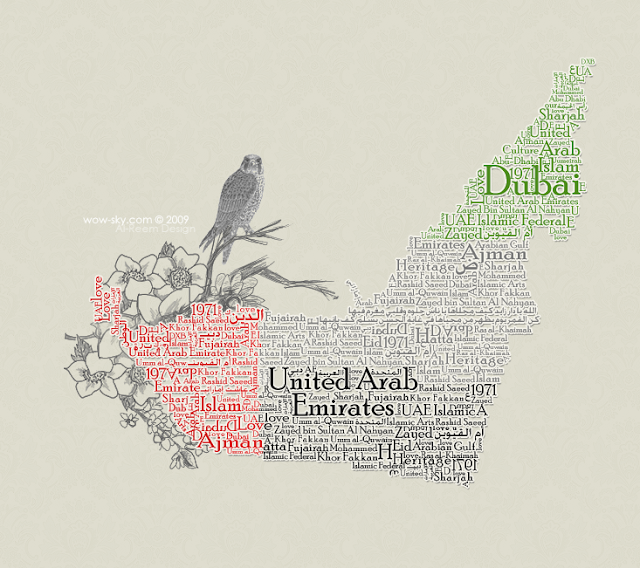 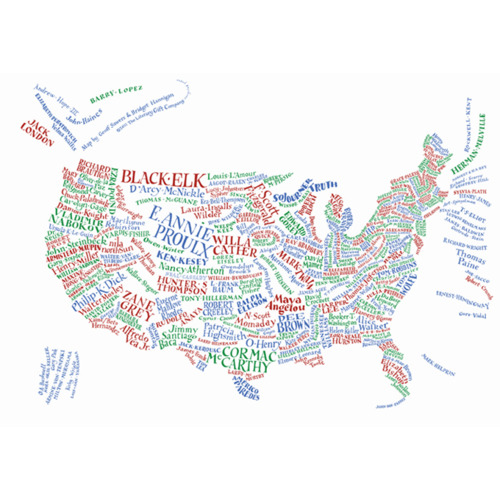 Literary typographic map of the U.S. 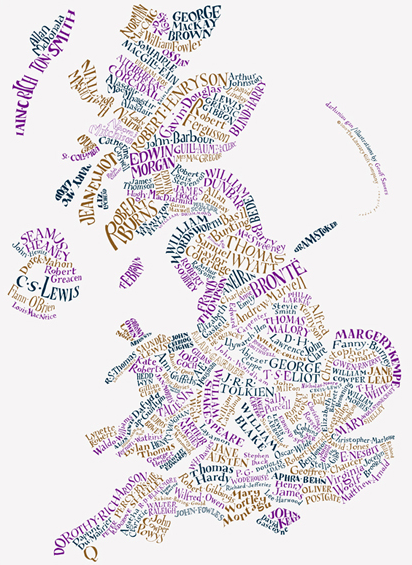 Literary Typographic map of the British Isles, oops, sorry, I mean of the U.K. Only Northern Ireland appears to be included, not the Republic. 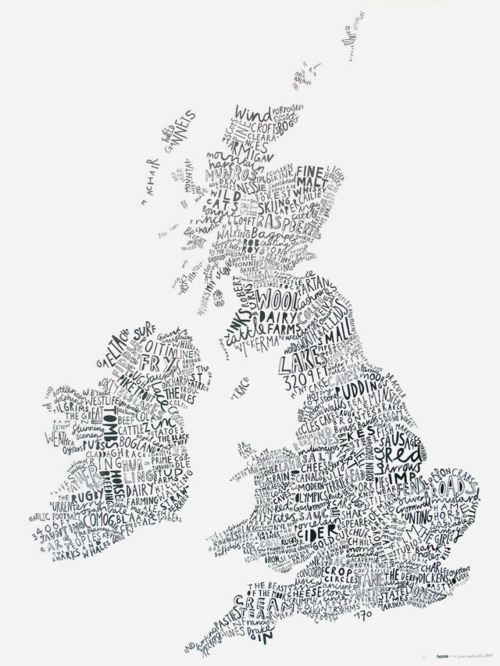 Major products of the British Isles, and things that regions are known for. 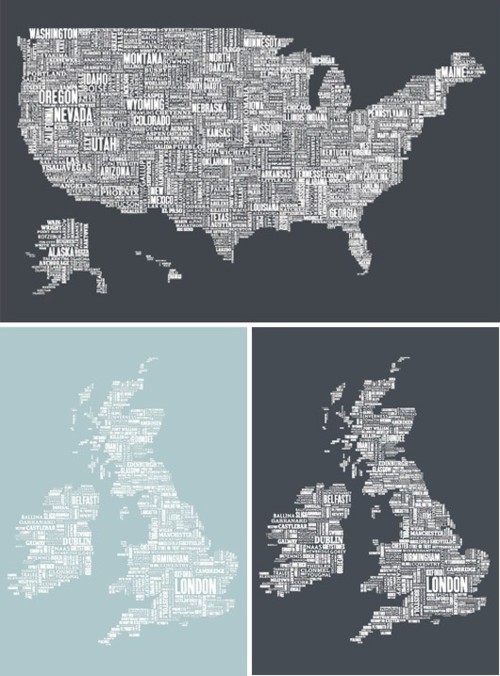 The U.S. and the British Isles 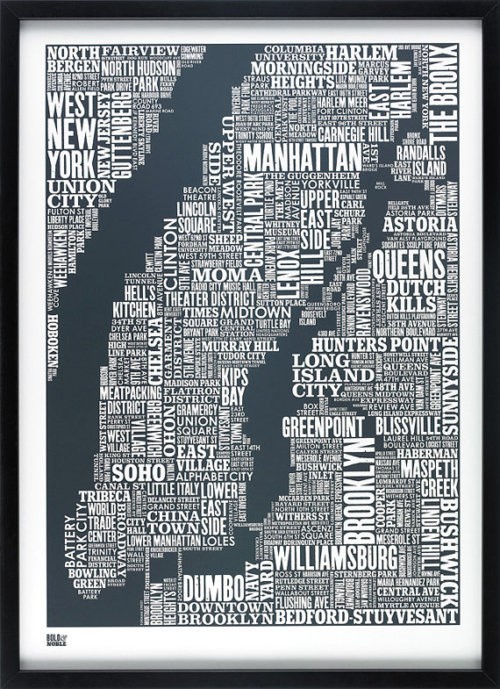 One more on New York, this one at least showing more than just Manhattan. 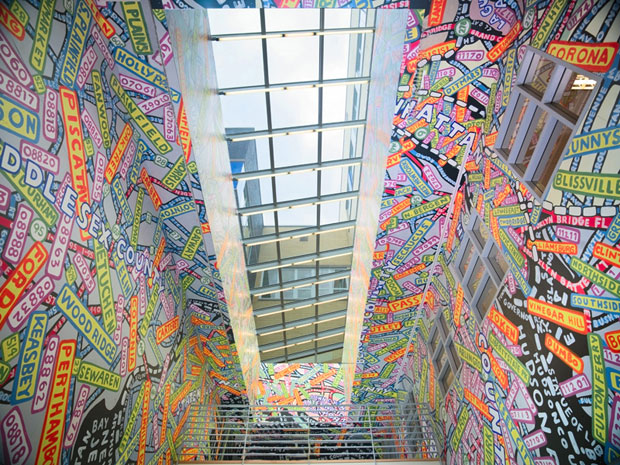 A Solarium, by Paula Scher
Posted by Map Monkey at 3:47 AM