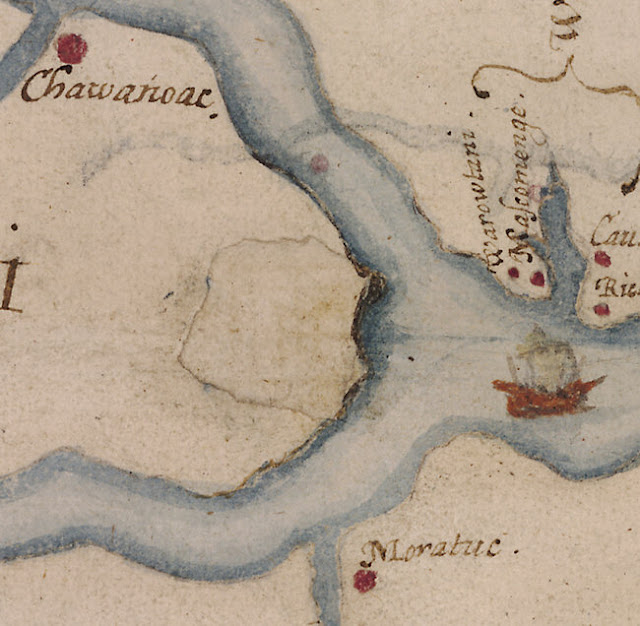 The Lost Colony of Roanoke Island, a 400-year old mystery, may just have gotten a major clue in the form of the investigation of a patch over an old watercolor map by John White in the collection of the British Museum.  From: http://www.nytimes.com/2012/05/04/us/map-markings-offer-clues-to-lost-colony.html  Thanks, Brian Morgan, for sending me the link!

In the 1587, English settlers came to a coastal island in what is now North Carolina for the purpose of forming a permanent colony in the New World.  This was the first English settlement to include civilians, not just explorers and military.  After a harrowing few months there, the leader of the expedition and the fledgling colony’s governor, John White, went back to England for supplies to ensure the colony’s survival over the coming winter.  When he returned, all traces of the colonists were gone.  For the past 400 years, people have speculated on what fate might have befallen them, including massacre by the nearby American Indian tribes, assimilation into the tribes, disease epidemic, starvation, and so forth. (White's return was delayed three years, until 1590, due to the Spanish Armada incident and Queen Elizabeth's moratorium on non-essential shipping during the duration of hostilities.) 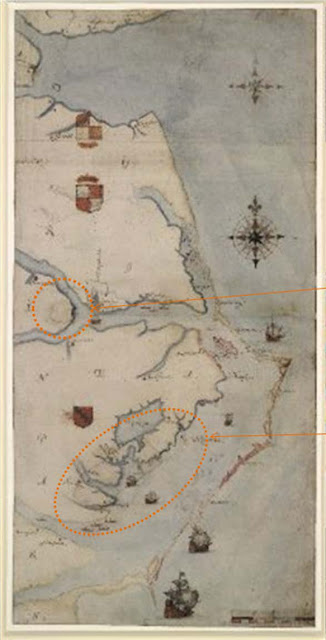 John White's 1587 watercolor map of the North Carolina coastal area, including the Roanoke colony.  The areas within the dotted outlines indicate the two areas of the map having patches afixed later.  Also, notice the various crests on the map, inserted on top of a "virgin" and "empty" landscape to denote English ownership and dominion over the place. 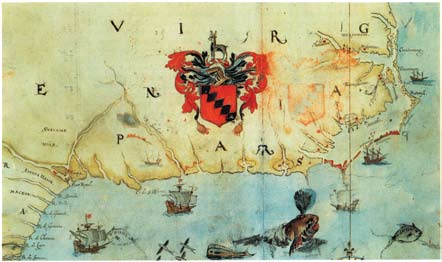 Earlier map of Virginia, by John White, 1585, with Sir Walter Raleigh’s coat of arms displayed prominently, a stamp of English possession imposed on the existing indigenous population.  Map from "New Found Lands: Maps in the History of Exploration,” by Peter Whitfield.
“Historically, one of the most important purposes in the development of maps was for political control. Those who could describe a place graphically and understand its location in relation to other places could put a claim to it and control it: if you were the one who could define boundaries and map an area, it belonged to you. Maps helped the powerful consolidate political power and establish jurisdiction over conquered territories.” From “GIS for the Urban Environment.”
This new examination of an old map sheds some light on what might have happened to them.  Underneath an inconspicuous patch on the map there was a drawing of a fortification.  Why the patch was put on the map covering the drawing of the fort is unknown.  It was common to put patches on maps when there was new information, as a quick and cheap way of updating the map without having to re-draw it completely.  It was less common to put a patch over a map to obscure or obliterate some piece of information.
Even on maps today, sensitive areas are “vague-ified,” and we see numerous examples of that with our own national mapping agency (USGS) in relation to military areas, archaeological sites, and certain endangered species conservation areas where it was deemed to be best not to show exact locations to the public.  The patched-over inland fort on the 1587 map may have been a situation like that, whereby the authorities did not want the location to be known.  It is now thought that perhaps the members of the Lost Colony made their way about 50 miles inland and built the fort rather than remain on Roanoke Island. 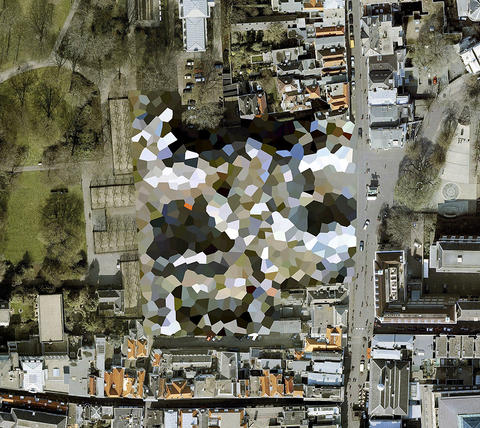 Paleis Noordeinde, The Hague, How the Dutch cover up sensitive areas on their Google Maps, from Granta.  More cool examples at http://www.granta.com/New-Writing/Dutch-Landscapes

The researchers at the British Museum looked at the map using a number of different techniques: Infrared Reflectograms, Infrared false color, Ultraviolet reflected, Ultraviolet induced luminescence, and Reflected visible light images, Raman spectroscopy, and all kinds of amazing high-tech image enhancing and processing methods to see the history of what had been drawn on the map.  The findings of the map investigation are quite fascinating, and are documented in a British Museum publication at http://www.firstcolonyfoundation.org/news/british_museum_findings.pdf 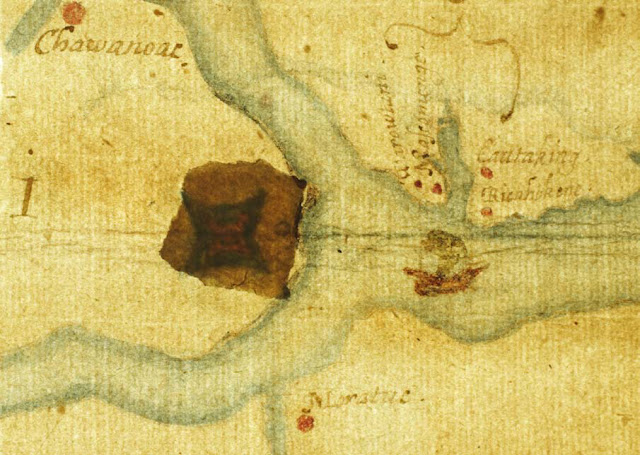 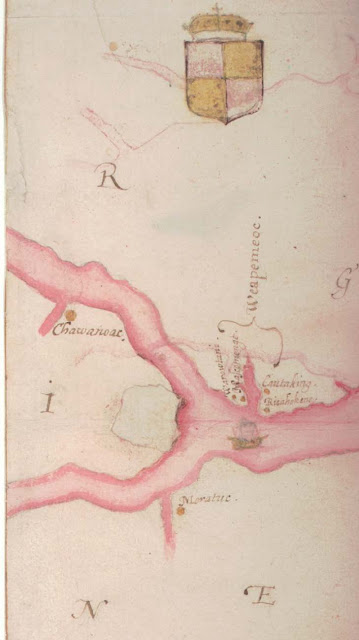 John White, the cartographer who created the map, had been to the New World once before, as the official map-maker and artist to a 1585 expedition to the same general area.  It was a rather novel concept at the time to have an artist and cartographer on board such a ship of exploration, and White’s paintings remain an important record of what life was like in the pre-colonized New World, especially 16th century Algonquin society.  In later years, artists were commonly employed on journeys of discovery, most famously in Captain James Cook’s voyages across the Pacific (late 18th century, fully two centuries after White’s work).  Engraved plates were made from John White’s drawings and the prints were disseminated throughout Europe under the title “America,” which helped to popularize the “exoticism” of the New World. 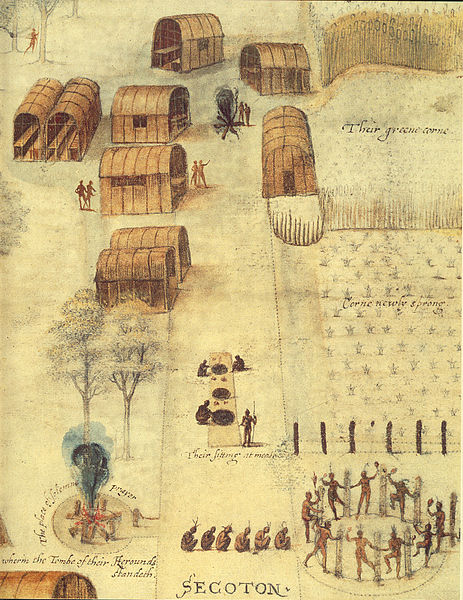 Village of the Secotan in North Carolina. Watercolour painted by John White, 1585, on his first voyage to America.
Posted by Map Monkey at 7:20 AM