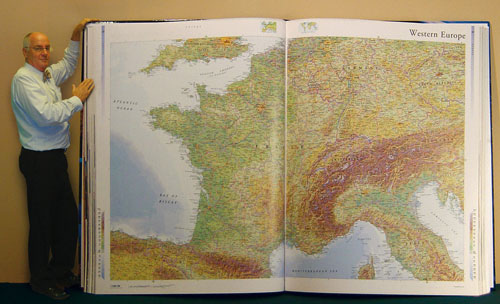 Earth Platinum, the World’s Largest Atlas, just published in a limited edition of 31 copies, at $100,000 each, pictured with Gordon Cheers, who spearheaded the 4-year project. The maps show geographic features  with an usually high amount of detail that is not possible to be shown on an ordinary scale map, including wee villages and mountain footpaths, and, for some odd reason, the location of shipwrecks!
OK, this is HUGE!  The world’s largest Atlas, beating the previous contender by more than a foot.  It’s 6 feet high and about 9 feet across when opened up, and is the brainchild of Gordon Cheers, who hopes his atlas, Earth Platinum, will become as renowned and influential as the 1660 Klencke Atlas (below). 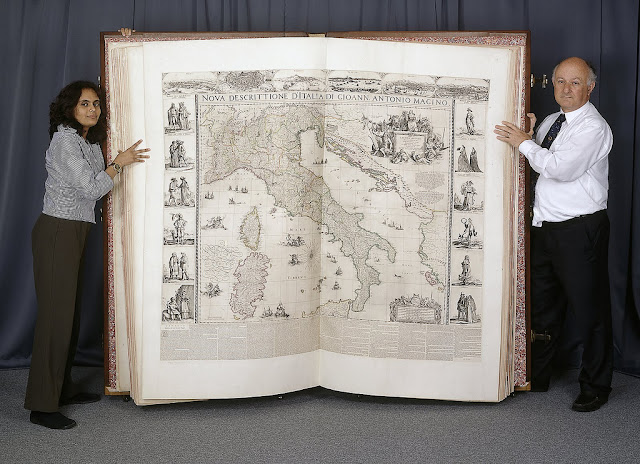 The Klencke Atlas, no slouch when it comes to size, is about 5 feet high and 6 feet wide when opened.  It had been produced as a gift from the Dutch to King Charles II of England when the King was restored to his throne after many years of living in exile in Holland. King Charles was apparently a map enthusiast, and the Atlas, produced in the Golden Age of Dutch cartography, contained maps by Blaeu and Hondius, amoung other well-known map-makers of the day.  See http://www.bbc.co.uk/programmes/p007hqxm for a short clip on the Atlas from The Beauty of Maps BBC series.
See the publisher’s website for full details on Earth Platinum:  http://www.millenniumhouse.com.au/title-earth-plat.html
Some info about the cartography that went into the Atlas: http://www.millenniumhouse.com.au/assets/EPpressrelease1.pdf
http://www.oxfordtimes.co.uk/news/features/9460673.Atlas_scales_new_heights/?ref=la
http://www.stuff.co.nz/entertainment/books/6008545/Atlas-offers-giant-window-on-the-world
Also see the Strange Maps write-up at http://bigthink.com/strange-maps/559-cheers-bests-klencke-the-worlds-largest-atlas
And let’s not forget the folly of large maps, as per the infamous large map in Lewis Carroll’s “Sylvie and Bruno:”
“And then came the grandest idea of all! We actually made a map of the country, on the scale of a mile to the mile!”
“Have you used it much?” I enquired.
“It has never been spread out, yet,” said Mein Herr. “The farmers objected: they said it would cover the whole country, and shut out the sunlight!  So we now use the country itself, as its own map, and I assure you it does nearly as well.”
Posted by Map Monkey at 5:29 PM