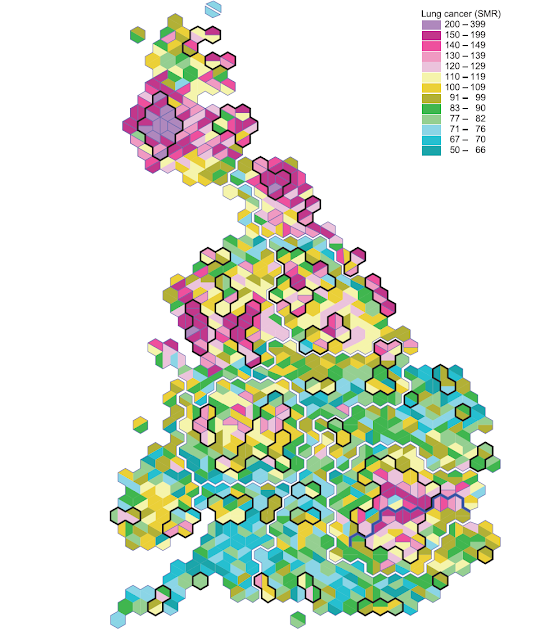 Standardized Mortality Rates for Lung Cancer in Britain.  “Smoking is strongly linked to deprivation.  The map shows a north–south gradient with lower rates in the south.  Scotland, and particularly Glasgow, has the highest rates; Scotland also has the highest smoking rates. Clusters are found in Liverpool and Manchester, in Tyneside and along the north east coast, and in central London.  Within central London, the neighbourhoods covering the cities of Westminster and London, and Kensington and Chelsea – more affluent areas – have lower rates than their neighbours.  The maps for male and female deaths are similar, except for higher rates for men in the West Midlands.” From http://sasi.group.shef.ac.uk/publications/reaper/gr_eg_maps.pdf
Danny Dorling (of World Mapper fame) and his merry band of mappers in the Social and Spatial Inequalities Research Group (University of Sheffield) have assembled an impressive atlas of health in the UK – The Grim Reaper’s Road Map: An Atlas of Mortality in Britain.  (Shaw, Thomas, Smith, and Dorling, 2008).  If you haven’t seen this, it is worth a look, and as usual, the SASI group has developed a novel way of portraying large data sets in an effective and clear manner.  They present the data in a way that is instantly comprehensible at first glance.
“The Grim Reaper's Road Map analyses over 14 million deaths over the 24 year period 1981-2004 in Britain.  It gives a comprehensive overview of the geographical pattern of mortality in Britain and features:
·         The most common causes of death at different ages
·         10 groups of death mapped - all deaths, and deaths from cardiovascular, cancer, respiratory, infections, mental disorder, transport, suicide or undetermined, homicide and external causes.
·         99 separate causes of death mapped, including individual cancers, suicides, assault by firearms, multiple sclerosis, pneumonia, hypothermia, falls, and Parkinson's disease
·         Each map is accompanied by a detailed description and brief geographical analysis, together with the number of people who have died from that cause, the average age of death and ratio of male to female deaths.”  From http://www.sasi.group.shef.ac.uk/publications/reaper.html
You can check out a sample section of the atlas at http://sasi.group.shef.ac.uk/publications/reaper/gr_eg_maps.pdf
Notice in the sample maps how the neighborhoods of Glasgow are always some of the worst off amongst the 1,282 “neighborhoods” that the country is divided up into - worse in everything from “All Deaths,” to “assault by cutting” (with knifes or broken bottles), to “lung cancer,” to “pedestrians killed by vehicles,” to “deaths from heart attack and chronic heart disease.”  Just about the only thing for which Glasgow is slightly better off than the south of England is the rate of skin cancer.  And that’s probably because the sun never shines up here!
Although I didn't find any explicit explanation of methodology on the website, it appears that a grid of equal-sized hexagons has been used to represent the parliamentary constituencies (electoral districts) of Britain, each hexagon equaling one constituency.  Hence the not quite geographically correct appearance of the country, since in real life each constituency is a different size and shape. The pattern of constituencies likely reflects population numbers, and so the map is a kind of a cartogram, resulting in a bloated Greater London area and a truncated Scotland, on the map. Constituencies are further divided into two halves, to show "neighborhoods."  The black boundary lines around groups of hexagons delineate major urban centers, and the white boundary lines around larger groups of hexagons represent regional and national divisions.  Isn't it wonderful to have all of this health data available at a national level! Consistency may be the hobgoblin of small minds, but NOT when it comes to data! 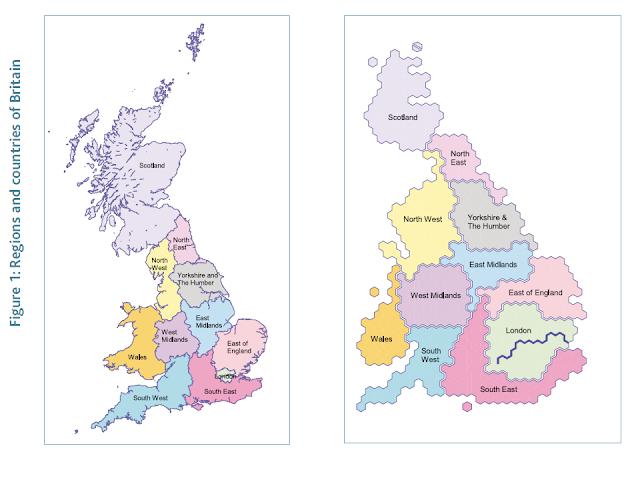 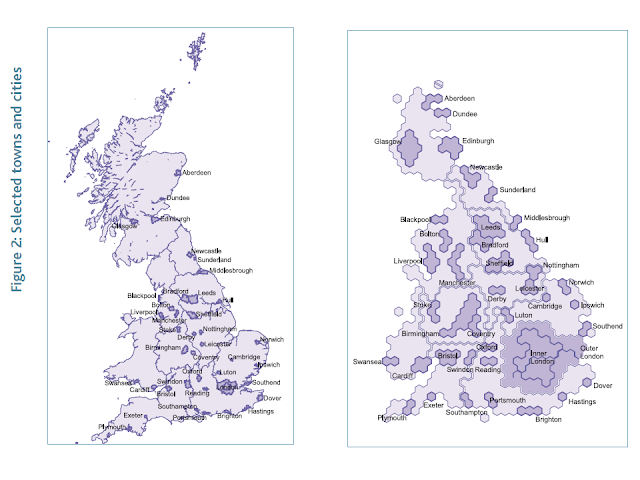 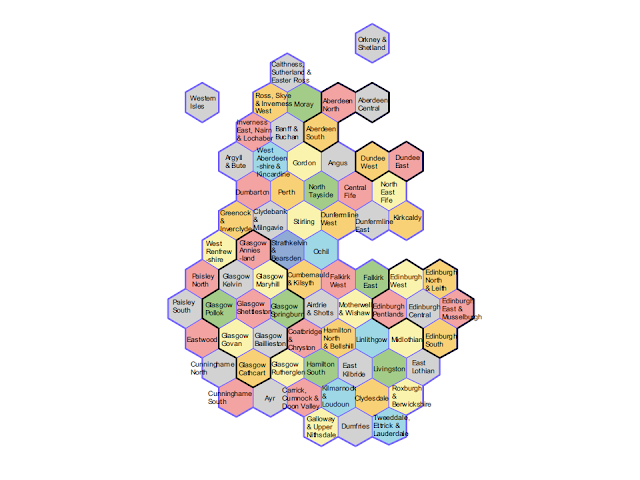 Scotland Constituencies - (I live in the "Glasgow Kelvin" constituency, on the left side of the map, which is a relatively healthy one, although no part of Glasgow looks very good on these maps!) 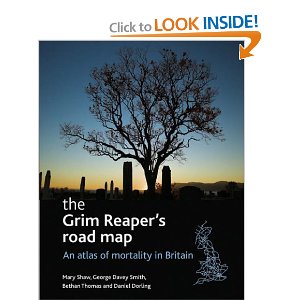 Cover of the book, available from Policy Press and Amazon.com