Google Doodle of Copernicus' Heliocentric model of the Solar System

So, any of you who opened up Google today doubtless saw their shout out to Copernicus, the mediaeval Polish astronomer and mathematician. Why they (Google) decided that 540 was a particularly significant anniversary is anybody's guess, but they featured on their home page an “animated Google Doodle,” of Copernicus’ heliocentric (or heliostatic) model of the solar system, showing the Sun at the center with the planets, including the Earth, highlighted, revolving around it.   Best known for his treatise "On the Revolution of the Celestial Spheres," Copernicus asserted that the earth revolved around the sun - contrary to the mediaeval belief that the earth was the centre of the universe (geocentric).  He is considered the patron saint of those who question the rules (and thus one of my heroes!) and of course the Church branded him as a heretic for challenging the belief that the Earth is at the center of the universe.  Luckily for him, most of the controversy actually started after Copernicus’ death in 1543.  In fact, at the advent of Copernicus’ theories, the Pope and various cardinals seemed very well-disposed to entertain these theories as interesting and useful.
Cardinal von Schonberg, Archbishop of Capus, wrote to Copernicus: “Some years ago word reached me concerning your proficiency, of which everybody constantly spoke.  At that time I began to have a very high regard for you... For I had learned that you had not merely mastered the discoveries of the ancient astronomers uncommonly well but had also formulated a new cosmology.  In it you maintain that the earth moves; that the sun occupies the lowest, and thus the central, place in the universe... Therefore with the utmost earnestness I entreat you, most learned sir, unless I inconvenience you, to communicate this discovery of yours to scholars, and at the earliest possible moment to send me your writings on the sphere of the universe together with the tables and whatever else you have that is relevant to this subject.”
It fell to later astronomers, like Galileo, to actually prove Copernicus’ theory of heliocentrism, since Copernicus made his discoveries with the unaided eye.  When Galileo later used a telescope to confirm the theory, that’s when the Church started going ballistic.  After Galileo, Kepler, and others brought the heliocentric model back into the limelight, the theologians started taking issue with Copernicus, stating that heliocentrism was against Holy Scripture, and was “philosophically untenable and theologically heretical.”  All who held Copernican beliefs were considered heretics.  But by this time, Copernicus himself had been dead nearly a century. 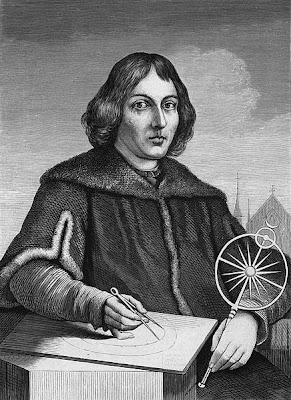 Copernicus was an interesting fellow.  Born in what had been Prussia, but shortly before his birth had become part of Poland, (although a German-speaking area), he probably identified more with his German-hood (or rather his Prussian-ness) than his Polish-ness.  It is even dubious that he spoke Polish very well.  However, the family supported the Polish cause in the 13 Years War with Prussia.  He attended Cracow University (in those days instruction was in Latin, the universal language of learning and the Church) and he was considered a polymath, having interests and expertise in law, economics, medicine, art, and the classics, in addition to what he is best remembered for today, astronomy and math.
He discovered the variability of the Earth’s eccentricity and of the movement of the solar apogee in relation to the fixed stars, and based on these and other astronomical observations, he created a reformed version of the Julian calendar for the Pope.  Although several Popes during Copernicus’ lifetime were pleased with his heliocentric model of the universe, he held off on publishing the book De revolutionibus orbium coelestium for fear of backlash and censure from the Church.  Legend has it that he had the book published only in his old age, and the first copy of it that he ever saw was placed in his hands on his deathbed right before he died.
Interestingly, Copernicus and Kepler both are honored in the Episcopal Church by a feast day on May 23rd.  Who knew?  This is especially ironic, as it seems to have been the Protestants who hounded him (or at least, those who ascribed to his theories) the most in the early 1600’s.  However, the Catholics, even worse, kept Galileo under house arrest until his death.  Well, there are those even today in these enlightened (benighted?) times who are afraid of acknowledging scientific truths for fear of what it will do to upset their worldview.  As Craig Ferguson, the late-night talk show host and comic, often says “ReMIND you of anyone?” 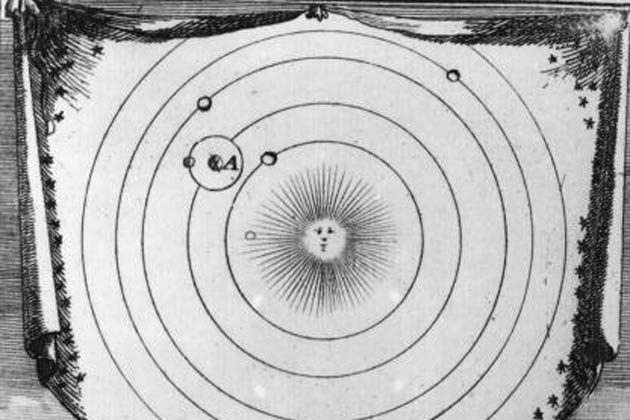