The Man Who Mapped Manhattan

The Commissioners’ Plan of 1811, showing how the grid plan was superimposed over the natural topography of the island.  It also shows the limits of development at the time it was produced.  http://www.nypl.org/blog/2010/07/30/designing-city-new-york-commissioners-plan-1811

We always hear about these “Commissioners” who were responsible for commissioning a street plat design for New York City (Manhattan).  But what about the man who actually carried out all the work involved in effectuating the grid plan?  What about John Randel, Jr.?
Hot off the presses: just published, a biography of John Randel, Jr., his life and times.  Little known anymore, John Randel is the man responsible for the regularized grid pattern of streets and property lots that marches over hill and dale (or what’s left of the natural topography after the street design was put in place) in Manhattan. 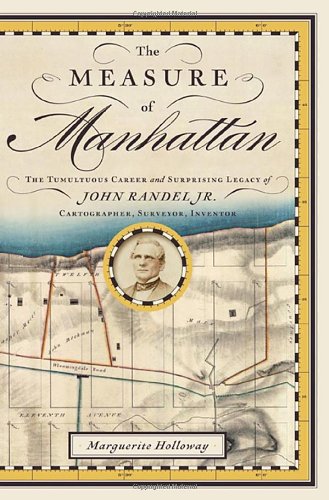 The Measure of Manhattan: The Tumultuous Career and Surprising Legacy of John Randel Jr., Cartographer, Surveyor,, and Inventor by Marguerite Holloway, 2013, http://www.amazon.com/The-Measure-Manhattan-Tumultuous-Cartographer/dp/0393071251

Here is a story from Columbia University’s New York Stories webpage, about John Randel and his biographer, along with a nice little video interviewing the author and showcasing some wonderful historic maps of Manhattan.  See the video at http://news.columbia.edu/grid

New York Squared: Marguerite Holloway on the Man Who Mapped Manhattan
“Just a few years after Lewis and Clark’s famous expedition to the great Northwest, another intrepid American set out on a journey through challenging terrain at the government’s behest. In 1808, John Randel Jr., a young surveyor, was charged with mapping Manhattan Island and laying out the street grid that, for 200 years, has shaped and spurred the growth of New York City.
In 2004, Marguerite Holloway, an assistant professor at the School of Journalism, found herself writing about the Mannahatta Project—an effort by environmental scientists to “recreate” Manhattan in its natural state. The scientists relied in part on Randel’s data. Fascinated by tales of the Albany-born surveyor (1787-1865), she says, “I tried to find out as much as I could about him—at the time, there was very little. It became an obsession.”
Holloway’s obsession has turned into a biography of Randel that has just been published by W.W. Norton. Researching the book, Holloway, an experienced science journalist, found herself scouring archives throughout the northeastern United States. “I’m used to asking people lots of questions,” she says. “But this time, many of my sources were long dead.”
Her book, she says, tries to paint a complete picture of Randel, whom she describes as a visionary. He “wrestled the wildness of the island as he imposed his vision upon it: Gone, in his mind’s eye, were the hills and ponds, the towering chestnut trees, the unruly outcroppings,” she wrote in a New York Times piece. “Randel was mesmerized by the image of a magnificent, neatly ordered metropolis.”
Randel was appointed to the task by New York City’s three street commissioners—one of whom was Gouverneur Morris, the 1768 graduate of King’s College who wrote parts of the U.S. Constitution. New York’s mayor for much of that time was DeWitt Clinton (CC 1786) who later as New York’s governor went on to champion a different feat of civil engineering, the Erie Canal.
Randel, whom Morris described as “more ambitious of accuracy than profit,” spent three years surveying the island for the famous Commissioner’s Plan of 1811. Then he spent the next 10 years physically imposing the grid from First Street to 155th Street using more than 1,500 3-foot-tall marble monuments sunk into the ground and, where there was no way to do that, bolts set in rock.
Randel and his men were pelted with vegetables, attacked by dogs and arrested for trespassing—the targets of landowners alarmed by the arrival of right angles in rural areas. Not only were the property lines going to have to be redrawn, but in many cases the imagined thoroughfares went right through barns and houses, Holloway explains.
"We can't say that he came up with the grid plan but he was the person who brought the grid to life...he scratched it into the landscape," she says. "He did it with such precision that surveyors today can follow Rand    l's maps--he got it right."
A longtime contributor to Scientific American, Holloway began teaching at the journalism school as an adjunct in 1997 and took a tenure-track position in 2006; she won a presidential teaching award in 2009. Holloway teaches science and environmental reporting in the M.S. program and in the Robert Wood Johnson Foundation Program in Health and Science Journalism, part of the M.A. program for experienced journalists.
Living on the Upper West Side, Holloway says, she has long appreciated the Manhattan street grid—“I liked it even before I’d heard of Randel.” She also likes the interruptions to the grid, places like the Columbia campus and Morningside Park, which “give you a different experience within the city”—no matter if the park is one of the “unruly outcroppings” Randel worked so hard to tame.”  — Story by Fred A. Bernstein — Video by Columbia News Video Team

Thanks, Susan McMahon, for sending the link to the story.

Please also refer back to my post of March 21, 2011, commemorating the 200th Anniversary of the 1811 Commissioners’ Plan at http://geographer-at-large.blogspot.com/2011/03/200th-anniversary-of-commissioners-grid.html

And now, for the first time, the Randel Farm Maps can be explored digitally, courtesy of the Museum of the City of New York (where there was an exhibit about New York’s grid pattern planning last year to celebrate the 200th anniversary of the 1811 Commissioners’ Plan) at http://www.mcny.org/sidebars/randel-farm-maps-online.html 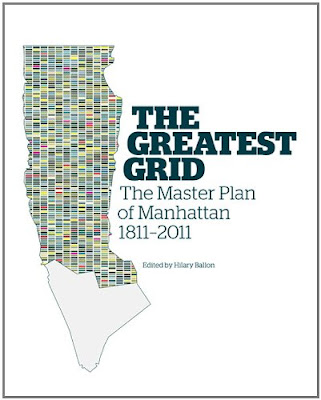 An excellent book on the 1811 grid was written in conjunction with this exhibit, The Greatest Grid: Manhattan’s Master Plan, 1811-2011, edited by Hilary Ballon. Blurb from Museum of the City of New York website: “Laying out Manhattan's street grid and providing a rationale for the growth of New York was the city's first great civic enterprise, not to mention a brazenly ambitious project and major milestone in the history of city planning.  The grid created the physical conditions for business and society to flourish and embodied the drive and discipline for which the city would come to be known.” 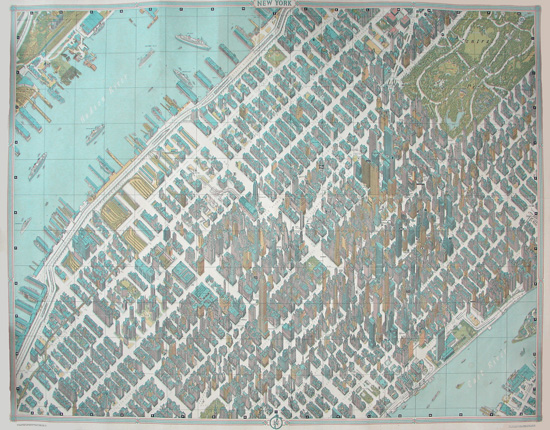 The famous 1962 Hermann Bollmann axonometric (parallel perspective) map clearly displays Manhattan’s famous gridded street pattern, (see my post on Bird’s Eye Views of NYC for more on the Bollmann map http://geographer-at-large.blogspot.com/2011/12/map-of-week-12-19-2011birds-eye-view-of.html) and below is a photograph emphasizing the unrelenting grid of mid-town Manhattan. 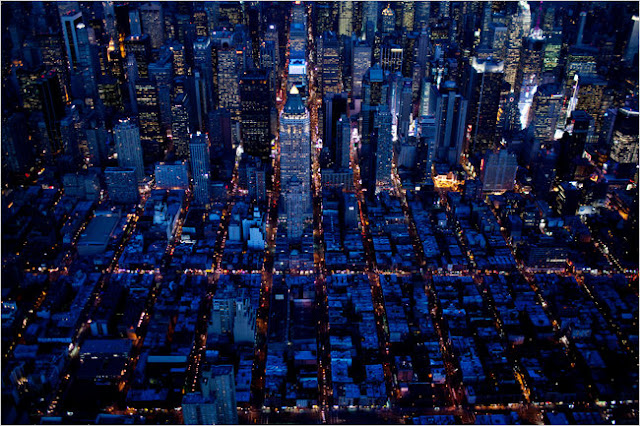 Not everyone is a fan of the grid, some calling it robotic, uninteresting, lacking in imagination, and mind-numbingly uniform, the enemy of spontaneity.  Others say the plan maximizes land use, was “visionary,” and tout its “modernity” and its transformative characteristics – the grid becomes the backdrop for whatever we want to project onto it. 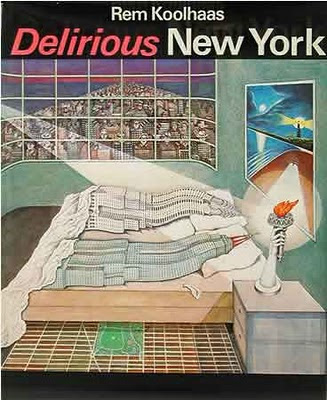 Rem Koolhaus, in his seminal 1978 book, “Delirious New York: A Retrospective Manifesto for Manhattan,” focuses on the grid as the enabler of Manhattan’s “culture of congestion,” calling New York a “metropolis of rigid chaos.”  He describes the grid as an “artificial domain planned for nonexistent clients in anticipation,” a negative symbol of the short-sightedness of commercial interests with no regard for interaction between fragments or spontaneity.  On the other hand, the grid is celebrated on the cover of his book as one of the defining elements of NY, with the iconic Empire State and Chrysler Buildings lying down in a bedroom where the area rug is a piece of the grid, and the bedside table lamp is the Statue of Liberty’s torch.
Tourists to the city tend to like the grid, because of the ease it creates in getting around the city, and the unlikelihood of getting too lost with the regular pattern and numbering system.  Of course, getting lost sometimes is half the fun of being a tourist, and romantics prefer cities like London or Paris which have little of the regularity to their street patterns, reflecting development over a long period of time, rather than a city platted basically in one fell swoop.  Naturally the real winners in Manhattan’s grid plan were the real estate developers who wanted a consistent and replicable way to develop and sell property.  The standard lot size of 25 x 100 (perfect for the attached townhouse format) made property development particularly lucrative.  The grid allowed for a predictable scheme for street access, ease of traffic flow, and infrastructure installation, and thus was a developer’s dream. 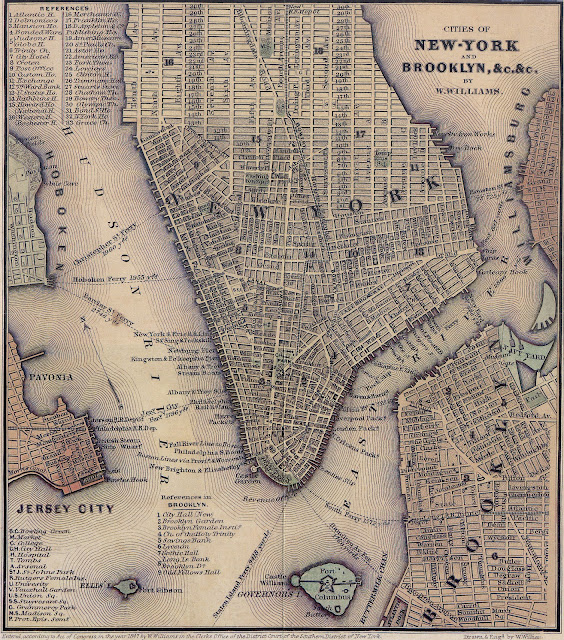 Prior to the 1811 Commissioners’ Plan, New York’s street pattern developed in a series of growth spurts that created a hodge-podge design.  There was the mediaeval tip of lower Manhattan, (still largely extant) with its organic maze of streets, and similar to what you would find in most European cities of the 16th century.  Then there were several areas built independently by large-scale land owners, such as DeLancey and Rutgers, both holders of large farm estates who subdivided their lands for commercial sale, and laid out streets in a grid pattern of their own devising.  These independently-developed street grids tended to collide with other adjacent gridded areas.  In this 1847 map of Manhattan, we can see the various colliding grids built prior to the 1811 Plan.
For better or worse, New York City would not be NYC without the grid, and the history of NYC’s physical development is a fascinating one.
Posted by Map Monkey at 4:14 PM