Bird’s Eye View of New York by John Bachmann, 1866
In the 18th and 19th centuries, these bird’s eye views of locations were very popular.  They combined the virtues of a map with a 3-D representation of the landscape, and more often than not were not true bird’s eye views, but oblique views, shown on an angle. They are called, variously, bird's eye views, panoramic maps, or perspective maps.  The web site http://www.bigmapblog.com/ has many of these, and all are worth looking at. In the past, nearly every large city, and many much smaller towns, had their streets and landmarks memorialized in a bird's eye view map.  Some of them are amazingly detailed, showing every ship in the harbor and every window in buildings.  They were the Google Street Views of their day.
This one, of NYC, features mainly Manhattan, as usual.  However, this is OK, since historically speaking, NYC was not “Greater New York City” until 1898, and this map dates from 1866, prior to consolidation.  Basically, NYC WAS Manhattan, back then.  Brooklyn was a separate city altogether, and Queens was a collection of small villages and farming communities.  The Bronx and Manhattan were two parts of the same county up until then.  The five boroughs did not join up to become what we now think of as NYC until 1898.  Coincidentally, NYC was consolidated the same year as the US starting building its overseas empire in earnest, acquiring, Guam, Puerto Rico, The Philippines, and Hawai’i.  Hmm, I never made the connection before:  I guess NYC was just jumping on the expansionist bandwagon when it incorporated the other boroughs!
In any event, you can see that when this view was drawn showing the city as it was in 1866, there is nothing higher than the church steeples.  A few years later, with the advent of the Otis elevator, and the steel frame construction enabling “skyscrapers,” all that would change forever. 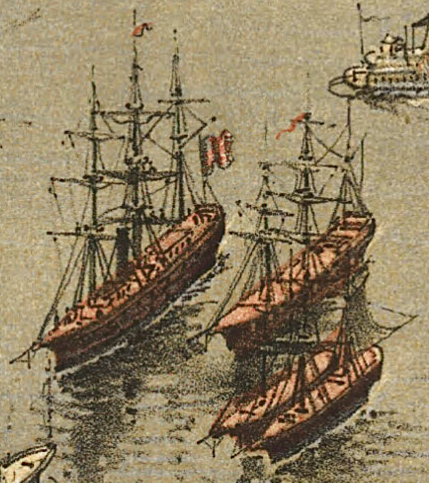 Details from Bachmann's map - boats in the harbor, above, and City Hall, below.  Amazing! 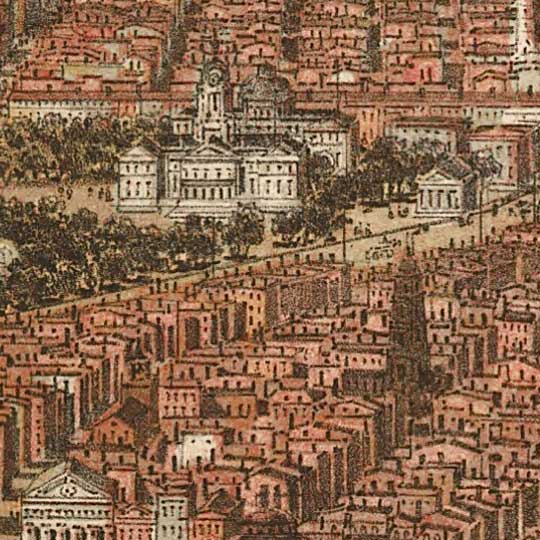 “The thorny problems with perspective mapping of NYC were finally solved rather spectacularly by the German graphic artist turned cartographer Herman Bollmann.  In the late 1940s Bollmann began drawing picture-plans, or bildkarten, of European cities using an oblique “optically modified” axonometric projection. Initially Bollmann drew his maps by direct observation using a light table in the field and by the 1960s was employing a special camera (mounted on a VW).  His New York Picture Map, published in 1962 by Pictorial Maps, was by far his most ambitious project. Over the course of only eight months, aided by 17,000 aerial and 50,000 ground photos, Bollmann and his staff created a map that not only showed an unobstructed view of Midtown, nearly to perfect scale, but included a remarkable level of architectural detail.  Kevin Brown of Geographicus called it 'one of the greatest cartographic feats of all time.'” From Codex 99 at http://www.codex99.com/cartography/110.html, where you will find more on specifically New York City bird’s eye and panoramic maps, including the Bollman map. 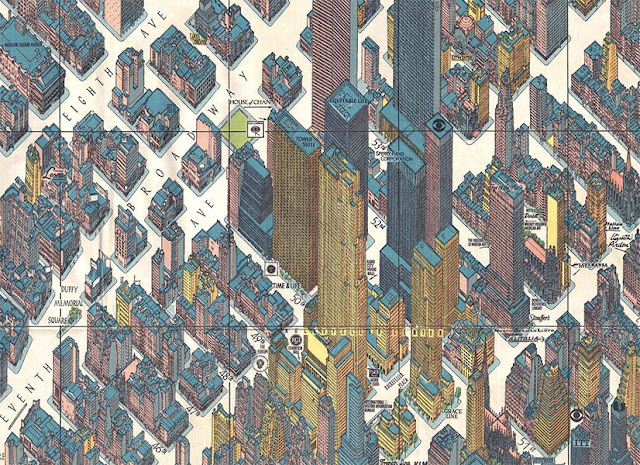