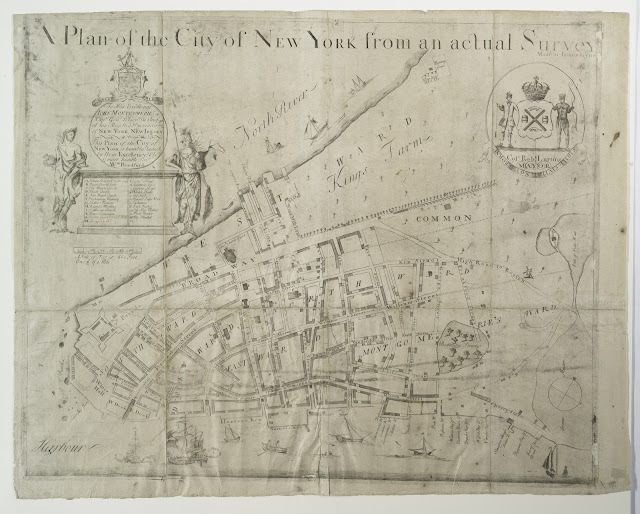 A plan of the city of New York.  Publisher: William Bradford.  Source: New York Public Library Digital Gallery.  The slave market structure is shown as a black square along the lower (East River) coastline of Manhattan, about mid-way between the drawings of the sailing ships.  It was situated at the top of the Wall Street slip, a canal like body of water that separated two quays (or "keys" as they are indicated on this map). North is on the right in this map, east is on the bottom.
Today, December 13th, marks an important anniversary in New York City.  Three hundred years ago, on December 13, 1711, the City Council passed a law “that all Negro and Indian slaves that are let out to hire…be hired at the Market house at the Wall Street Slip…” This market, known as the Meal Market (because grains were sold there), was located at the foot of Wall Street on the East River.  It was the city’s first slave market.  Although it had been located on the shores of the East River, subsequent landfilling resulted in the site of the Slave Market now being located several blocks inland, at what is now the intersection of Wall Street and Water Street. 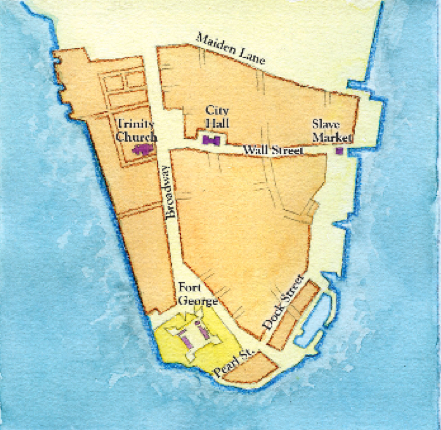 A modern version of the map showing the slave market on the right.  Here, north is top, and east (and the East River) is on the right hand side of the map.
I did not know anything about this slave market before a few days ago, when a blog reader wrote a comment on my post about the African Burial Grounds at  http://geographer-at-large.blogspot.com/2011/01/african-burial-grounds-update-and.html   Despite my fairly extensive knowledge of New York City history, I was not aware of the existence of the slave market.  Now, I DID know that New York City, at one point, had more slaves than any city in the nation, second only to Charleston, South Carolina, but for some reason I never really thought about what that would mean in terms of the logistics of buying and selling African and Indian people, the actual financial exchanges, and the need for a centralized place to conduct this business.  Naturally, there would have to be a slave market.  And once this was brought to my attention by the blog reader, a person from a group called Occupy Publishing, I figured I’d like to find out more. 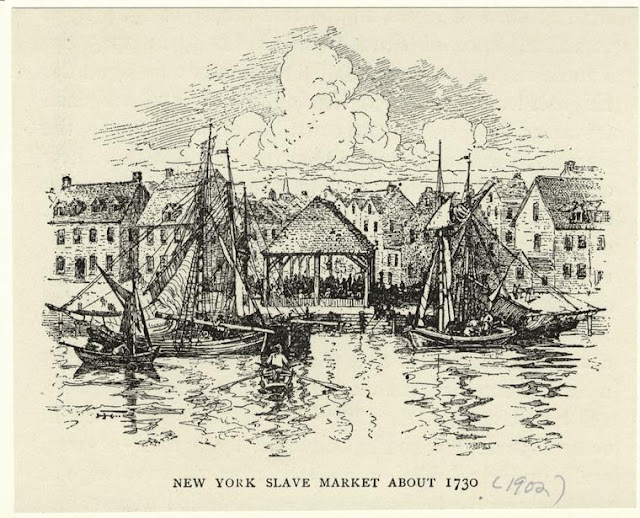 Apparently the market was deemed to be necessary because when slave masters had little or no work for their slaves, they were sent out to roam around the streets looking for work to hire themselves out to do.  This haphazard arrangement made some of the white residents very nervous.  So they built a centralized place where people looking to hire workers could go.  After a time, the market was viewed as an eyesore and an obstruction of the views of the East River (“the agreeable prospect of the East River”), and was evidently especially offensive to those people traveling back and forth to the Coffee House (the original site where merchants traded stocks, and which eventually became the NYC Stock Exchange).  In 1762, the slave market structure was torn down.
Ironically, the corner of Wall and Water Streets where the 18th century Slave Market was established was very close to the headquarters of the Amistad Defense Committee (122 Pearl Street near Hanover Street) at the offices of silk merchants Lewis and Arthur Tappan, abolitionists who organized the defense committee and were among the founders of the American Anti-Slavery Society in December 1833.  In 1834, their office was attacked by a pro-slavery mob.  http://www.huffingtonpost.com/alan-singer/new-york-was-the-land-of_b_594016.html
This is the text from the law itself:
1711. Law Appointing a Place for the More Convenient Hiring of Slaves
Source: Minutes of the Common Council of the City of New York, vol. II, 458, December 13, 1711.  Be it Ordained by the Mayor Recorder Aldermen and Assistants of the City of New York Convened in Common Council and it is hereby Ordained by the Authority of the same That all Negro and Indian slaves that are lett out to hire within this City do take up their Standing in Order to be hired at the Markett house at the Wall Street Slip untill Such time as they are hired, whereby all Persons may Know where to hire slaves as their Occasions Shall require and also Masters discover when their Slaves are so hired and all the Inhabitants of this City are to take Notice hereof Accordingly.  From:
http://people.hofstra.edu/alan_j_singer/Gateway%20Slavery%20Guide%20PDF%20Files/3.%20British%20Colony,%201664-1783/6.%20Documents/1711.%20Wall%20Street%20Slave%20Market.pdf
There are many historic sites in the city having to do with the institution of slavery, the enslaved people themselves (both African and Indian), and the contributions of these people to the building of the city and the New York story.  Some of these sites are described in the Mapping the African American Past (MAAP) website at Columbia University.  http://maap.columbia.edu/place/22.html  One relatively modest way to commemorate this part of our history would be to erect a series of signs at the important sites.
Here is another couple of websites with some good information on the slave market era.
http://people.hofstra.edu/alan_j_singer/Gateway%20Slavery%20Guide%20PDF%20Files/3.%20British%20Colony,%201664-1783/2.%20Section%203%20Intro%20essay.pdf
http://www.slavenorth.com/newyork.htm
This site has an interesting list of New York City laws pertaining to slavery from 1652-1841.  http://www.slaveryinamerica.org/geography/slave_laws_NY.htm

If you would like to sign the petition asking the Mayor to provide signage on Wall Street about the Atlantic slave trade in New York City, please go to http://www.change.org/petitions/mayor-bloomberg-and-the-nyc-city-council-wall-street-signage-about-atlantic-slave-trade-in-nyc