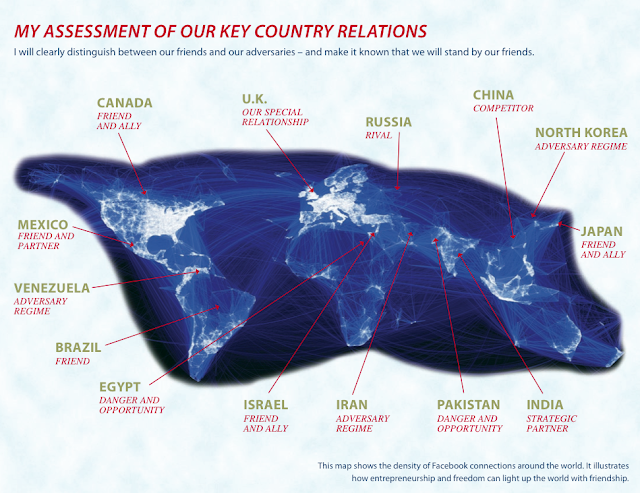 A Scarily Ill-Informed Map: Herman Cain’s Vision: Peace Through Strength and Clarity
http://hermancain.com/issue/foreign_policy_national_security
As you know, I usually try to stay away from politics in my blog - or, at least, overt references to politics, at any rate!  Of course, any of my regular blog readers have probably figured out by now that I am an unreconstructed progressive/left-of-left/ex-hippie/patriotic-but-not-nationalistic-citizen-of-the-world.  And somewhat radical, but in a low-key, conventional sort of way, especially now as I’m entering my dotage!  My tear gas days on the barricades are over, regrettably.  In other words, or actually, in the words of William Safire, the speechwriter for Spiro Agnew, our infamous and disgraced 39th Vice President of these United States, I am a distinguished card-carrying member of the “effete corps of impudent snobs who characterize themselves as intellectuals.”  Or, perhaps I am even a “nattering nabob of negativity.”  Take your pick, he lobbed all those alliterative epithets at us, and worse, during my formative years.
Notwithstanding, I felt that I had to break my own guidelines of non-partisanship when this crazy map came to my attention today, and it was just too weird and sad not to share with all of you.  It comes from a Herman Cain brochure entitled “Foreign Policy and National Security - Herman Cain’s Vision: Peace Through Strength and Clarity.”  This map is the center piece of Cain’s vision for foreign policy.  It’s hard to imagine a more simplistic and jingoistic view of the world, and he put it in writing!  And made a map of it!
He vows in this brochure to make America respected “once again,” but IMHO, this map and the policies it purports to represent is not going to do the trick. Au contraire, in fact.  It’s insulting to America and to just about everyone else!  It’s also really sloppy thinking, and, well, what’s the opposite of rigorous?  He uses terms that are not defined and seem duplicative.  What’s the difference between a “rival” and a “competitor,” anyway?  Or a “friend and partner” and a “friend and ally”?  Hard to figure.  Plus, as an extra bonus, the document is full of mis-information and outright un-truths about President Obama's policies and positions (trying to be diplomatic here, and not call them “lies”).  But, hey, kudos to Cain for being the first 2012 candidate to use a map as a central part of their campaign!
OK, I’m off the soap box now.  Just take a look for yourselves.  And if anyone has seen any other GOP crazy-time maps, PLEASE let me know!  HA HA!  http://corporatestatesofamerica.com/archives/74 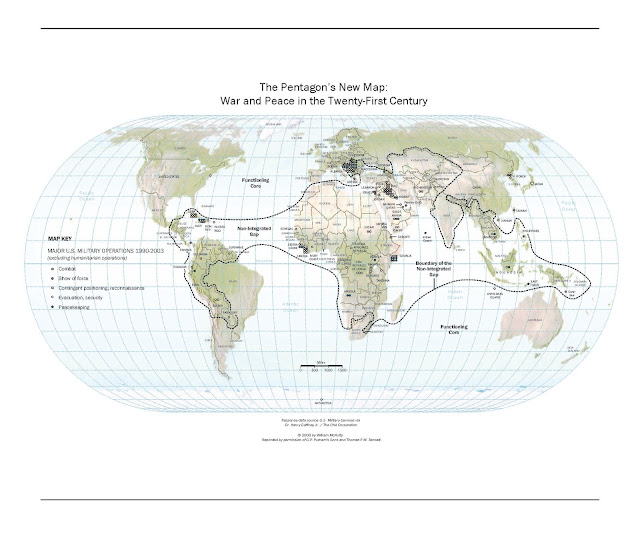 The Pentagon’s New Map: War and Peace in the Twenty-First Century from: http://thomaspmbarnett.com/low-resolution-map/
Thanks, Keith Miyake, for your comment below about Thomas Barnett's map, which I've added to the post.  I personally do not find a tremendous amount of congruence between Barnett and Cain's worldviews, but the Pentagon's New Map (2003) is very interesting in its own right.
Posted by Map Monkey at 6:52 PM