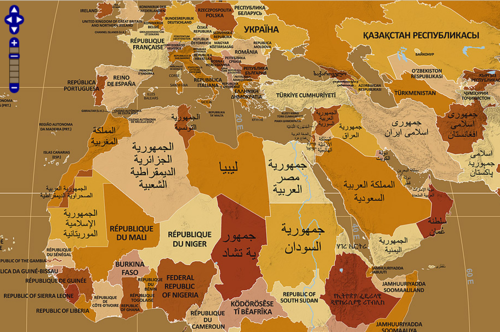 A map of endonyms of the world’s nations – what the people living there actually call their country.  See the interactive map at http://endonymmap.com/ and notice the four smaller maps in each corner showing the Anglophone, Le Monde Francophone, the Hispanofonia, and the Arabic-speaking world.
“Some language facts: The most common official or national language in the world is English, with 86 countries or territories.  These jurisdictions represent roughly one-third the number of total countries and approximately 30% of the planet's land area.  After English, the most common official languages are French, Spanish and Arabic.  Combined, these four languages are used officially in 157 countries, about two-thirds of all countries.”
What is the nature of “place” and “space”?  What is the difference between the two terms?  People in different cultures perceive place and space differently.  This is made evident in the names they assign to places.  We call these names of geographic features and places “toponyms.”  (from the Greek τοπος / topos – place, and ὄνομα / ónoma, - name.)
When people get to chose their own names for places and features in their home landscapes, we call those “endonyms.”  When the names are assigned from others outside the culture, we call them “exonyms.”
The more precise definitions are as follows (from “The Nature of the Endonym” by Paul Woodman, Working Paper No. 1 from the United Nations Group of Experts on Geographical Names, 2009):
"Endonym: Name of a geographical feature in an official or well-established language occurring in that area where the feature is situated. Examples: Vārānasī (not Benares); Aachen (not Aix-la-Chapelle); Krung Thep (not Bangkok); Al-Uqşur (not Luxor).  From ένδον / endon = within."
"Exonym: Name used in a specific language for a geographical feature situated outside the area where that language is widely spoken, and differing in its form from the respective endonym(s) in the area where the geographical feature is situated. Examples: Warsaw is the English exonym for Warszawa (Polish); Mailand is German for Milano; Londres is French for London; Kūlūniyā is Arabic for Köln (in English, Cologne).  The officially romanized endonym Moskva for Mocквa is not an exonym, nor is the Pinyin form Beijing, while Peking is an exonym.  The United Nations recommends minimizing the use of exonyms in international usage."
The theme of space and time (including the relation to toponymy) has been explored by many scientist-philosophers, including Plato, Aristotle, Ptolemy, Newton, Descartes, Wittgenstein, Einstein, and the philosopher-geographer Yi-Fu Tuan, who coined the term “topophilia” to denote the fondness and love one feels for a specific place.  "..the affective bond between people and place or setting..." (Topophilia: A Study of Environmental Perceptions, Attitudes, and Values, 1977.)
The Algerian toponymist, Brahim Atoui, wrote that “One names in order to delimit, to isolate, identify, distinguish, demarcate, and also and especially to give value.”  (from Introduction à la notion d’espace et de limite contenue dans un nom de lieu, Introduction to the concept of space and limits contained in a place name, 1998.)
Many cultures recognize that human life is bound up inextricably with the land, and lest we think this people-land connection is felt mainly by aboriginal and tribal societies, any number of “western” writers and artists spring to mind as having described what most of us, regardless of cultural background, have felt – the attachment and reverence for place, home, the locus of memories, repository of the past, symbol of our place in the universe.
“We need to appreciate the context of space and place that produces it.  Most endonyms arise from the elemental human relationship with space and place, and possess an intrinsic and enduring value which cannot normally be either bestowed or removed by political arbitrariness.” From: http://unstats.un.org/unsd/geoinfo/ungegn/docs/25th-gegn-docs/wp%20papers/wp1-natureofendonyms-wg.pdf 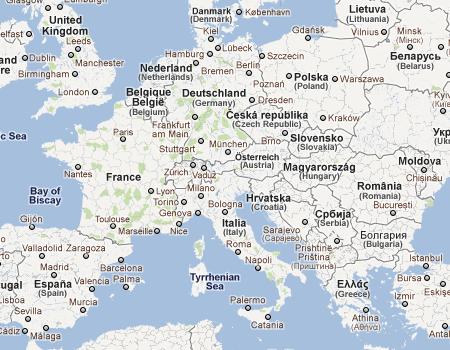 Google Maps is now showing place names with the endonym given first, as well as putting the English usage toponym underneath, in parentheses.


Hat tip to the Indigenous Mapping Network for posting the Interactive Endonym Map earlier this week.
Posted by Map Monkey at 8:45 AM