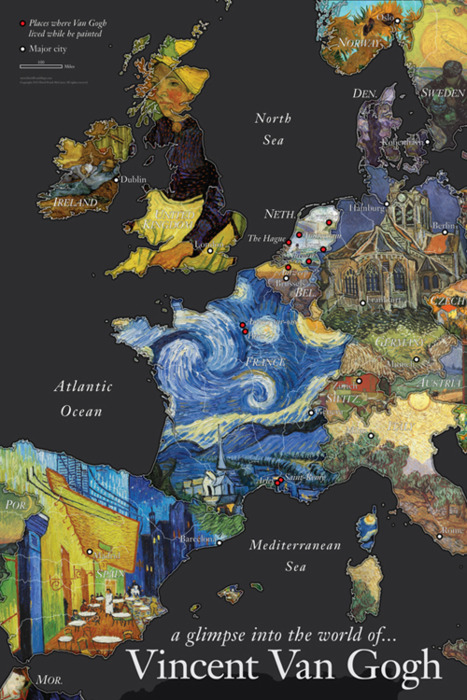 Just something peaceful for the day after Christmas.  This map (by David McCarter) shows where the Dutch artist Vincent van Gogh (1853-1890) lived, and depicts the European countries as being made up of parts of van Gogh’s paintings.  This map puts me in mind of a lab assignment from the Geovisualization and Analytical Cartography class last year in which students were asked to create a map in the style of a well-known artist.  For some of the very creative results, see http://geographer-at-large.blogspot.com/2011/02/bogus-art-maps.html
“David McCarter is a Geography Graduate student at California State University, Northridge, where he is specializing in Cartography and GIS.  Ever since he can remember, he has had a strong interest in both art and maps.  When it came time for college, he almost opted to be an art student but finally choose geography because of how incredibly diverse that field is.
Late last year, he figured out a new way to fuse fine art with his maps by using paintings to represent different political divisions.  He came up with the concept during a final project for a graduate cartography seminar.  The final project was to create a map that was outside of the box. He came up with several ideas, but felt that none of them were outside of the box enough, and perhaps not outside at all.  Finally he decided to make a map showing the locations that one of his favorite artists, Vincent Van Gogh, lived while he painted his masterpieces.  After playing around for a while with different ideas on how to display the data to best help the map reader not only know the locations of where Van Gogh lived, but also represent Van Gogh himself, he decided to have Van Gogh paintings represent the different countries.  France was represented by Starry Night, etc.  This fused two of his passions together: cartography and fine art.
Since that time, David McCarter has made a wall map of the United States where each of the 50 states is represented with a painting by an American artist (such as Norman Rockwell, Mary Cassatt, and Charles Marion Russell) and a wall map of Italy where each of the 20 regions is represented with a painting by an Italian artist (such as Leonardo da Vinci, Michelangelo, and Raphael). Other geographic data that is displayed on the United States and Italy maps include capitals, major cities, and major rivers.
The purpose of these decorative wall maps is to showcase both geography and fine art in an enjoyable and educational way for people of all ages. David McCarter’s maps can be viewed at www.DavidFrankMaps.com.”  from: http://geography.gislounge.com/fusing-fine-art-with-cartography/
Posted by Map Monkey at 8:32 AM