How the Other Half Lives: Tenement Life in Old New York 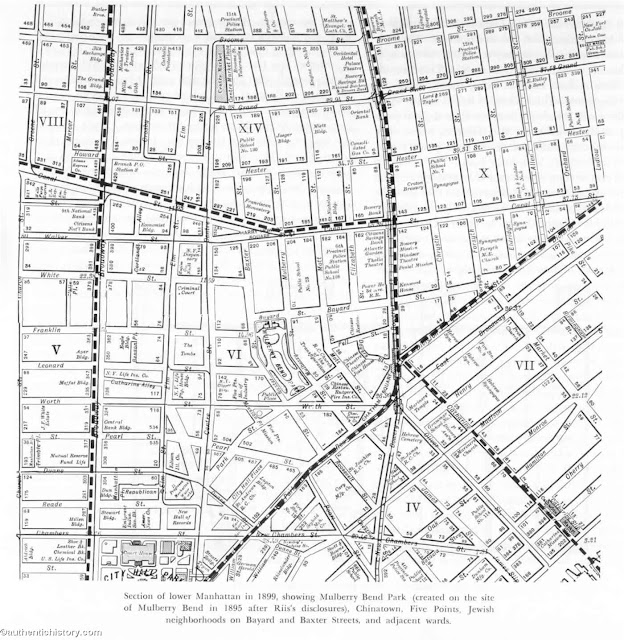 1899 Map of Manhattan’s Lower East Side/Chinatown/Little Italy areas – showing parts of the old Wards IV, V, VI, VII, VIII, X, and XIV, the epicenter of tenement geography, which included the notorious Five Points area.  Notice the symbols on the map indicating rail lines - these would have been steam locomotive-drawn surface transport (which still dangerously operated within the city), steam trains on elevated lines, or electric trains on trolley tracks – the first subways were not built until 1904, about 5 years after this map was published.
How the Other Half Lives – Studies Among the Tenements of New York
OK, I heard from a couple of you who vigorously objected to Jacob Riis’ 1890 photo essay book, “How the Other Half Lives,” being kept off the list on a technicality.  So I thought about it and realized that not only are the photographs incredible, and the accompanying text a gorgeous example of the muck-raking style of journalism popular in the late 19th century/early 20th century, but for the sheer influence factor alone in the court of public opinion as well as actual policy and program changes that were implemented to benefit the poor, due to Riis’ expose of living conditions in NYC’s slums, we could not in good conscience leave the book off the list! 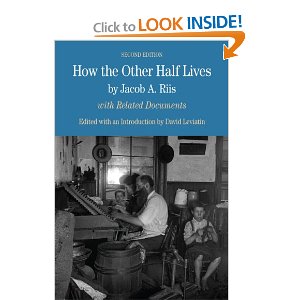 The book is available in a new (2010) edition with some words by a Harvard historian, and some supplemental materials which have apparently not been published previously.  I myself have not yet seen this edition, but it seems excellent. 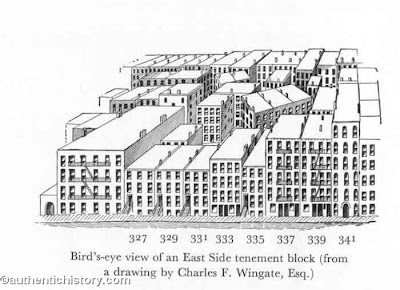 Bird’s eye view of a tenement block – this is just one block, bounded on the four outer sides by streets.  There are no internal streets: one accessed the interior buildings either via a maze of alleyways or by going through the first floor hallways of the front buildings to access the rear courtyards (which used to be backyards, before people got greedy and starting sticking more housing back there). 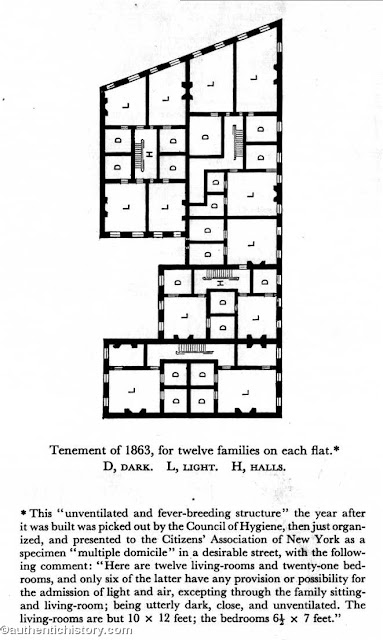 Plan of typical tenement flats - Notice (in addition to most of the rooms having no windows for light and ventilation – imagine living through a NYC summer without access to fresh air!) there were no bathrooms or actual kitchens in the apartments.  Cooking would have been done in the fireplace or coal stove in the living room.  Water for cooking and washing would have been brought up in buckets from a stand pipe in the backyard that served dozens of families, or a public water pump down the street. (Imagine living in a 6th-floor walk-up and having to haul gallons of water every day upstairs – 1 gallon equals 8 pounds).  Privies or latrines for the entire building (and whomever else!) would have been in the basement or backyard, and be basically outhouses (not flush toilets, obviously!) without running water, just a pit.  These were filthy and also dangerous places, so often people used chamber pots instead, especially at night, and it was common-place practice to toss the contents out the windows.
And to get an even more up close and personal feel for the era, visit the Tenement Museum, on Orchard Street on the Lower East Side.  http://www.tenement.org/
Here is their bibliography:  http://www.tenement.org/documents/history/bibliography.pdf
When the Map Monkey has more time, I will expound in greater length on the evolution of the tenement form in a future blog posting.
Posted by Map Monkey at 1:08 PM