FREEDOMLAND USA – A Theme Park Shaped Like a Map! (in da BRONX!!)

Fifty years ago this past June, Freedomland, USA opened here in the Bronx, on the site of the old Pelham Bay dump, which was formerly a salt-water marsh, and where Co-op City, the mega-unit housing complex, is currently located.  Most of you reading this blog are probably too young to have experienced Freedomland firsthand, since it only lasted about four years (it closed at the end of the season in 1964), but many of you, even Bronx natives, may not have ever heard of it at all.  What, you might well ask, was Freedomland?  Well, it was a US-history inspired theme park, the first and possibly the only one of its kind, and was designed by the same man responsible for the original Disneyland concept (the one in Anaheim, CA, which opened in 1955, a few years prior to Freedomland, NOT the much-later DisneyWorld in Orlando, FL, which opened in 1971). 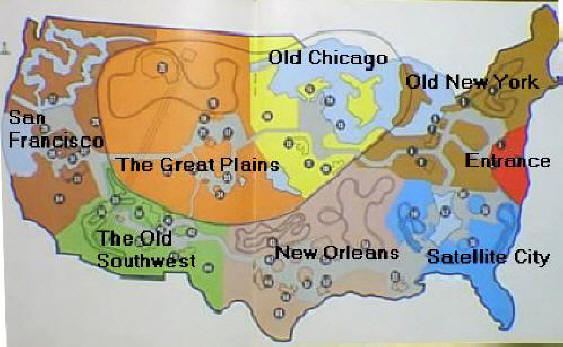 Geographers and map-lovers of all stripes should really relate to Freedomland: the park was actually laid out in the shape of the continental United States.  Various sections of the park were dedicated to 8 different distinctive regions of the US (New Orleans, New York, San Francisco, the Old Southwest, the Great Plains, and a Futuristic Satellite City, and so forth) complete with stage coach rides through the old west, sidewheelers up the Mississippi River, a horsedrawn streetcar ride, the San Francisco earthquake ride, and a mine cavern train ride, among many other attractions.  The stagecoach ride featured in the video toppled over once during the first year of the park’s operation, injuring 10 people, several of them quite seriously, and the lawsuit and subsequent settlement helped propel the park on its downward slide toward bankruptcy.
http://www.youtube.com/watch?v=vpWcFZ-_LqU
Travel Time: Freedomland 1963, featuring the famous stage coach ride that was ultimately very ill-fated
I visited Freedomland a number of times over the 4 years it was open, although not as often as I visited closer-by attractions like Rockaway Beach’s Playland, which we could get to under our own steam as kids by taking the Cross-Bay bus down Woodhaven Blvd.  Actually, the promotional material for Freedomland touted the park’s closeness to midtown Manhattan (“only 30 minutes from Times Square by subway!”) but we all knew THAT was extremely unlikely. The subways didn’t move any faster back then than they do today, and Freedomland was at the very diggity diggity end of the line up near Pelham Park, and visiting the park then required that you take a bus from the end of the line to the park itself.  It suffered from the same lack of easy access to public transportation as does Co-Op City today, which was constructed on the Freedomland site after Freedomland was torn down in 1965.  Fortunately, the park DID have a 72,000 car parking lot!  However, at that time many families within the city did not own cars, and the suburbanites with cars had perhaps other places to go and things to do aside from making forays back into the Bronx, from which many of them had undoubtedly recently made their “escape.”
I remember traveling to Freedomland with my Mom driving a car-full of neighborhood kids, and going over the Throgs Neck Bridge from Queens to the Bronx to get there.  The Bridge was also brand new at that time, having just opened in 1961. 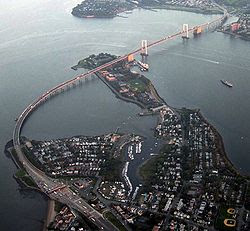 Aerial photo of Throgs Neck bridge
So even before we got to the Satellite City of the Future in Freedomland, we were already enjoying the futuristic brave new world landscape of NYC: the Throgs Neck Bridge - a long-span suspension bridge which was the brain child of New York’s Master Builder, Robert Moses. 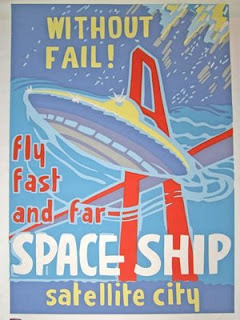 The Space Ship ride at Freedomland's Satellite City:
Doesn’t this look suspiciously like the Throgs Neck Bridge behind the flying saucer?
As futuristic as the trip to Freedomland made us feel, when we got there, we were still in a place that had been built on the old Pelham Bay dump, which was essentially a swamp, and mosquitoes were a problem in the warm weather (basically whenever the park was open, since it was a seasonal affair).
To take our minds off the mosquitoes, there were also musical acts that played Freedomland – many of them the most popular artists of the day, such as Louis Armstrong, the Everly Brothers, Count Basie, Dick Clark (yeah, that dude is OLD! And still hosting Rockin’ New Year’s Eve every year!), and my personal favorite, who I saw there in the Moonbowl, Little Eva, (then only 16 years old!) doing her one-hit-wonder song, the Loco-Motion!
http://www.youtube.com/watch?v=C5OoQadZTPk&feature=list_related&playnext=1&list=MLGxdCwVVULXfH0_iuzUn_fD1IF3x0u4ik
[Little Eva performing the hit single “Loco-Motion” live on the TV show Shindig, in 1965.  Little Eva was the baby-sitter for Carole King, the singer-songwriter who wrote Loco-Motion, as well as many of the memorable hits of the 1960’s (“One Fine Day” – the Chiffons; “You Make Me Feel Like a Natural Woman” – Aretha Franklin; “Chains” – the Beatles; “Up on the Roof” – the Drifters; “Don’t Bring me Down” – The Animals; “Pleasant Valley Sunday” – The Monkees, and many more that I don’t remember right now, but a veritable who’s who list of musical talent on both sides of the pond for more than a decade, you get the idea!]
This focus on musical performances was pretty typical for these amusement parks – Palisades Park in New Jersey (just across the Hudson River from Harlem) was well-known for it, and it helped attract a lot of teenagers, who were probably the main market for these places.  This points out one of the reasons why perhaps Freedomland didn’t do well – teenagers had a hard time reaching it on their own because of the lack of easy public transportation.  Freedomland also had a lot of competition at that time – these local amusement parks were all over the tri-state area in a way that we tend to forget about today, what with the more recent mega-parks like Disney World, Epcot, Universal Studios, 6-Flags, Busch Gardens, etc.  At the time Freedomland opened in the Bronx, we had quite a number of other amusement park options: Palisades Amusement Park (closed 1971); Coney Island’s AstroLand (most of the Coney Island amusement parks - Dreamland, Steeplechase Park, Luna Park – were closed by the 1960’s, and the last remaining one continues to be at risk due to the threat of luxury housing development); Rockaway’s Playland, with the famous “Atom Smasher” roller coaster (closed 1986 or so); Rye Beach Playland, which is still open, but the county has put out rfps for its redevelopment; and Jungle Habitat (a drive-through safari experience, not strictly an amusement park, but falls generally within the purview of a “theme park,” closed 1976).  But probably the biggest competition, albeit temporary, was the 1964-65 World’s Fair in Flushing Meadow Park (built on another former dump site).
I’ve been thinking a lot recently about these old amusement parks in the city, about who they were intended to serve, who they actually served, and where they were located – usually at the outer edges of things (in swamps, former landfills, on beaches, cliffs high above the river).  They were definitely at the periphery of things.  And even then local residents found reason to agitate about their removal.  Fashions in leisure-time activities change, demographics change, and there are probably as many individual reasons for these parks closing as there were different parks.  Still, although Freedomland doesn’t have the long historic pedigree that Coney’s Luna Park does, nor the romance and memories Palisades Park provides for those of the World War II-era and the elder Boomer generations, it WAS a geographically-themed park, and for that, if nothing else, I feel a twinge of nostalgia that it is no more.
http://www.youtube.com/watch?v=ZQxwLuFWspU&feature=related
Freedomland, the World’s Largest Outdoor Entertainment Center, Bronx, NY – Home movies of Freedomland
http://www.youtube.com/watch?v=oO2uCfEXDNg&feature=related
Lost Joe Franklin’s Freedomland
(“Mad Men” stylee beauty contest/fashion show at Freedomland)
http://theboweryboys.blogspot.com/2009/02/podcast-freedomland-usa.html
Bowery Boys New York City History podcast 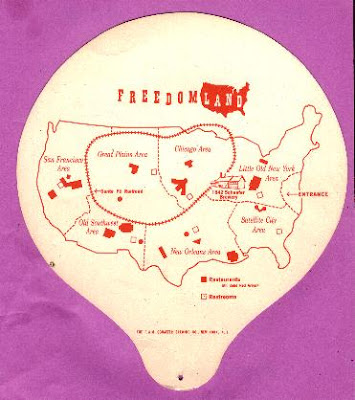 A Schaeffer Beer coaster from Freedomland!  I guess they put a map on the coaster so you didn't get lost after you had your beer! "Schaefer is the one beer to have when you're having more than one," was their advertising slogan, and it was the best selling beer IN THE WORLD in the 1960's.  Brewed in New York City since 1842 (but, sadly, no more....).