A Most Remarkable Creature!

Here are the migration plots from one season of the study.  Check out how far they traveled.  Check out their names!

Now THIS is something near and dear to my heart – leatherback sea turtles!  People who have known me any length of time know that I am an amateur herpetologist, having been interested in turtles, tortoises, lizards, iguanas, and most amphibians since I was a wee lassie, and have made informal studies of same and traveled to many turtle-centric locales.  I have had some success with caring for these creatures, and was the recipient of a number of “lost causes” from the Bronx Zoo and other collections that I nursed back to health.  Some of my little guys I got as hatchlings and juveniles, and they are now over 30 years old.  So Holly and other friends and former students often send me interesting tid-bits on these guys, which I always appreciate. 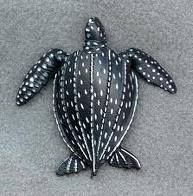 Leatherback sea turtles - Dermochelys coriacea - This is what these beauties look like! (they are the only living species in the genus Dermochelys and the family Dermochelyidae.)
Adult individuals in the leatherback species, as written about in these websites and articles, are typically 6-8 feet long, and weigh 1,200 to 1,500 pounds.  Their front flippers can span about 9 feet.  They are the largest living reptiles!  They are air-breathing, but can stay underwater for 2 hours or more without surfacing for air, and can tolerate water temperatures as low as 30 degrees F.  They are amazing animals!  Contrary to how we usually think of turtles, these guys rest only about 1% of their time, the remainder of their time is spent swimming, and they swim at a speed of 22 miles per hour!  This high activity level generates heat, which explains how they can live in such cold waters, despite being cold-blooded.  Their geographic range is from Norway, Newfoundland, Greenland, and Iceland (the Arctic Circle) in the north, to New Zealand, South Africa, and southern Argentina in the south, and they are found in every ocean, including the coastal waters around NYC.  Their breeding and nesting areas are confined mainly to warmer waters.

D. coriacea nesting distribution.  Yellow circles represent minor nesting locations. Red circles are known major nesting sites.
We have only just begun to fully appreciate the Leatherbacks’ amazing trans-oceanic migrations, knowledge gained mainly through satellite technology, since previously the turtles were literally and figuratively too far off our radar screen – they do not frequent areas popular with most humans, they spend a lot of time mid-ocean and in long-range migration paths between continents, and so we rarely see them after they hatch.
Due to their somewhat flexible carapaces – hence the “leatherback” in their name - they have the ability to withstand extreme pressures, and thus are deep-divers; some have been tracked at depths of over 4,000 feet below the surface.  They are typically off-shore dwellers - they don’t hang out along the coast except during the mating season (“78% of all leatherback sea turtle locations were received from the high seas” Witt et al, 2011).  Mating usually takes place in the shallow waters near the nesting beaches.  After breaking out of their eggs as hatchlings, the male sea turtles rarely if ever come on land again in their whole lives (50-80 years or more), and the females make landfall as adults (15 years+) only once every 2-5 years or so to lay their eggs.  Nesting is done in the exact same beach where she herself hatched out.  Thus, the incredible importance of habitat preservation of nesting beaches for sea turtles – when a beach is destroyed or developed, it eliminates it as a nesting site for every female who hatched there, and that line is essentially wiped out.  The females will not nest in any old beach, but only where they were themselves “born.”  Scientists think this has to do with the hatchlings “imprinting” the visual cues, smells, and textures of a specific beach, and having a kind of an internal “GPS” that helps guide them back there.
Of course, habitat destruction of the nesting beaches is only one of the many perils that threaten the continuation of this species (and all other sea turtle species).  Other hazards include fishing by-catch (long-line fishing), shrimp trawling, fishing with dynamite, pollution from off-shore oil rigs and tanker oil spills, turtle eggs dug up by animals or humans (who, in many cultures, consider turtle eggs to be aphrodisiacs), predation of defenseless hatchlings by crabs and seabirds on their trip from the nest to the sea, mortality of juveniles and adults due to contact with boat engine propellers, ingesting plastic that looks like jellyfish, their favorite food, and the list goes on and on.  They are an endangered species.

This paper has lots of good technical detail on the radio telemetry process, as well as a good explanation of exactly what the study investigated. 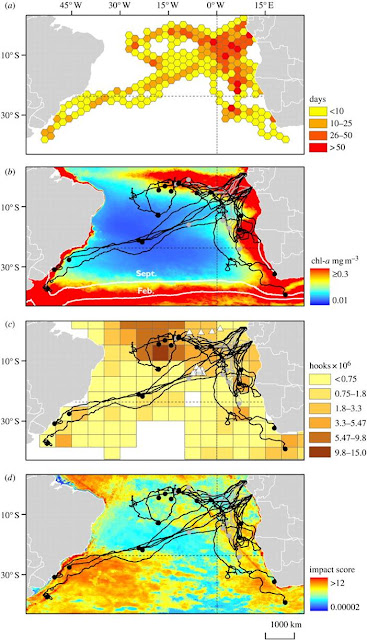 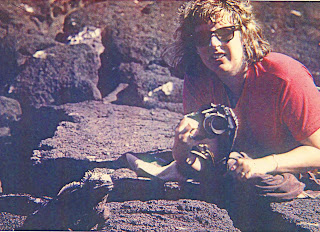 The Map Monkey, up close and personal with a Marine Iguana on Fernandina Island in the Galapagos.