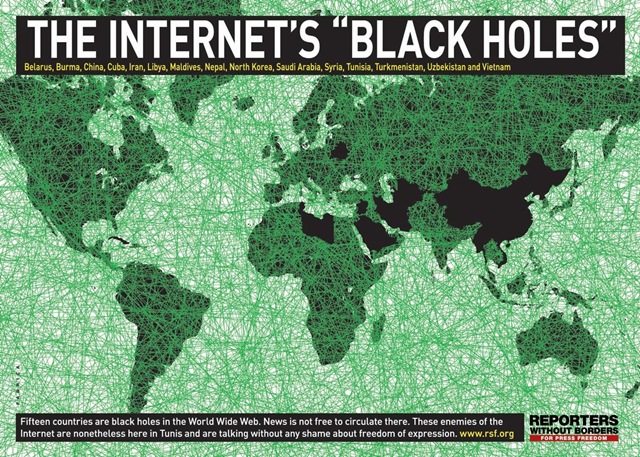 Internet Black Holes
From: Reporters without Borders, http://en.rsf.org/more-than-25-000-people-have-08-11-2006,19651.html and http://en.rsf.org/nawaat-reporters-without-borders-11-03-2011,39776.html
Continuing in our cartographical exploration of  Freedom of the Press, (and Freedom of Information, in general, see http://geographer-at-large.blogspot.com/2011/09/map-of-week-9-5-2011-growth-of-us.html) from a couple of months ago, this week's Map of the Week shows countries in the world where access to the full Internet is severely restricted.
“The fight for online freedom of expression is more essential than ever. By creating new spaces for exchanging ideas and information, the Internet is a force for freedom. In countries where the traditional media are controlled by the government, the only independent news and information are to be found on the Internet, which has become a forum for discussion and a refuge for those who want to express their views freely.
However, more and more governments have realised this and are reacting by trying to control the Internet. Never have so many countries been affected by some form of online censorship, whether arrests or harassment of netizens, online surveillance, website blocking or the adoption of repressive Internet laws. Netizens are being targeted by government reprisals. Around 117 of them are currently detained for expressing their views freely online, mainly in China, Iran and Vietnam.”  Text from http://march12.rsf.org/en/
You can download the full report with the list of countries considered to be “Internet Enemies,” and also those countries “under surveillance” at the web site above.  Surprisingly, amongst the “usual suspects” are also countries such as Australia and France, and if the UK government has its way, it may soon be joining the list.  In the wake of the recent riots in the UK, the government is considering banning certain uses of social media. 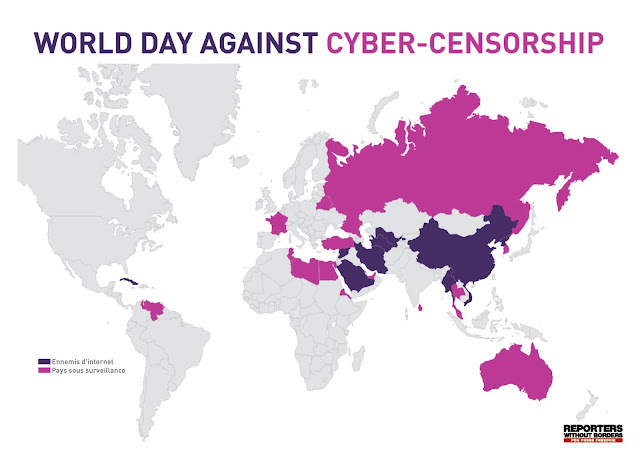 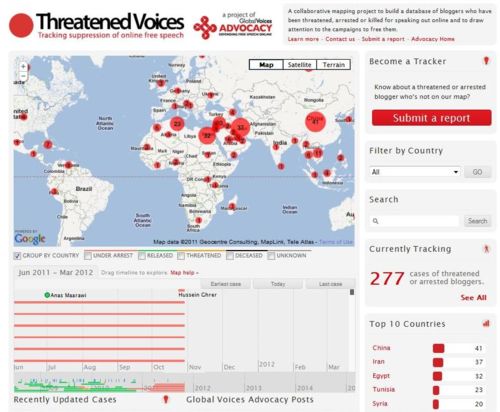 And this is a mapped database showing BLOGGERS who have been threatened, arrested, or killed.  Unbelievable.  From: http://threatened.globalvoicesonline.org/
On the interactive map at the website, you can click on the icons, and each blogger's story comes up about their arrest, imprisonment, or murder.
Posted by Map Monkey at 10:27 AM

Email ThisBlogThis!Share to TwitterShare to FacebookShare to Pinterest
Labels: Freedom of the Press, Internet access, Reporters without Borders