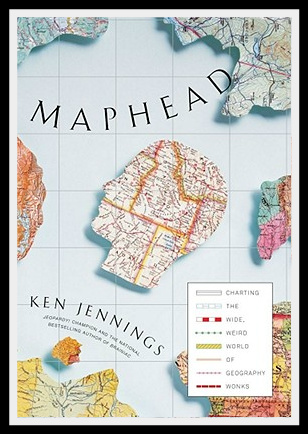 Maphead book cover
OK, I am not a TOTAL nerd, but I happened to chance upon this nice book tour lecture event which aired on C-Span this evening.  Yes, apparently I have nothing better to do on a Friday night than scan through channels and actually stop at C-Span!  HA HA!  (very sad!)
Anyhoo, I lingered on C-Span because I recognized that, surprise, surprise, it was a talk by Ken Jennings, the author of Maphead: Charting the Wild, Weird World of Geography Wonks, a recent book that I believe I mentioned before in this blog somewhere, probably when I was recommending geography books in a previous post.  Ken Jennings is also renowned for being a winner on the trivia quiz game show Jeopardy  - 74 times in a row, winning over $2.5 million dollars, and setting a Guinness World Book record for the most money ever won on a game show. 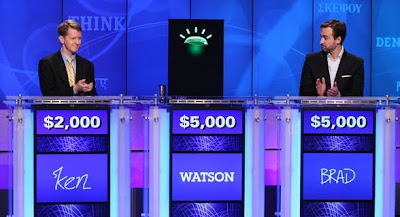 They also brought him back to the show last year, to play against the IBM computer “Watson,” who beat the humans, but at least Ken came in 2nd.
Ken is truly a Maphead, having slept with a Hammond World Atlas under his pillow when he was 7 years old.  Jennings’ book is an “exploration of why maps and geography have always been so fascinating to him and to fellow mapheads everywhere,” according to the book's publisher, Scribner.  “Jennings takes a world tour, meeting countless other geo-geeks, from the antique-collecting millionaire at the London Map Fair to the map librarians in the bowels of the Library of Congress, from the pre-pubescent geniuses at the National Geographic Bee to the computer programmers at Google Earth, from the shores of Montezuma to the halls of Rand McNally.”
Although the Book TV show that I just watched on C-Span (link below) is about 40 minutes, it is a very fast moving show, and at the end (and this will be of interest to geography trivia buffs) he runs a little quiz show for the audience members.  Of course, I found it endlessly amusing to see how many of the questions I got right.  (Sample questions that were memorable enough for me to remember them: what is the “stan” country in central Asia that is completely surrounded by the other stans?  How many countries have the word “Guinea” in their names?  What is the largest desert in the world?  Until a few months ago, what was the largest country by area in Africa?  There was also a real stumper question about an enclave country in Africa, but I don’t remember it exactly.)
When he took questions from the audience at the end of his talk, one person asked him to what he attributed his memory capacity and his vast mental holdings of information, and how would he advise a young person today to obtain and retain all that knowledge.  His answer was really great – he talked about how most of the people he ever knew who were good at retaining incredible amounts of knowledge were people who were curious, and who were interested in everything; people who enjoyed putting pieces of information together and make connections from one thing to another; seeing how everything in the world fit together.  In other words: sponges, who are fascinated by everything and absorb it all, and try to find the patterns and linkages.  In other words, Geographers.
http://www.booktv.org/Watch/12828/Maphead+Charting+the+Wide+Weird+World+of+Geography+Wonks.aspx 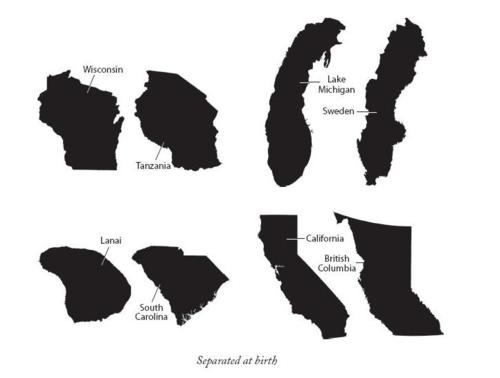