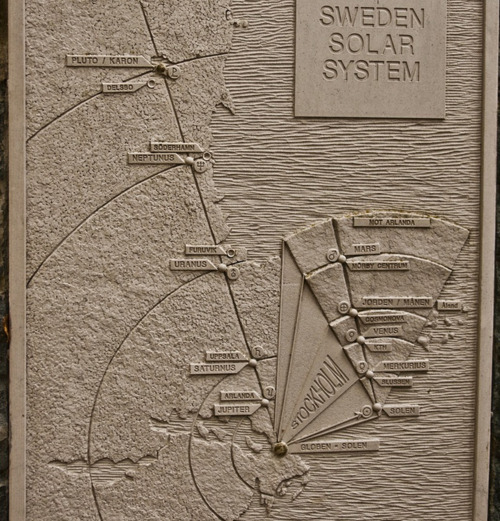 This is one of the very few maps I have ever seen done in bas relief!  It is a map of a large-scale model of the solar system, and it stretches over 1,000 km, from one end of Sweden to the other, above the Arctic Circle.  It is, perhaps, one of the largest models (of ANYTHING!) in existence.

“The Sweden Solar System is the world's largest model of our planetary system, built at a scale of 1:20 million and stretches the entire length of the country.  The Sun is represented by the Globe arena in Stockholm, the largest spherical building in the world.  The planets are placed and sized according to scale with the inner planets being in Stockholm and Jupiter at the International airport Arlanda.  The outer planets follow in the same direction with Saturn in Uppsala, and Pluto in Delsbo, 300 km from the Globe.
The model ends at the Termination shock, 950 km from the Sun.  The Terminal Shock is the edge of heliosphere, the farthest place where the solar wind goes in supersonic velocity.  No sculpture currently represents the terminal shock, but a foundation for a future sculpture exists at the Institute of Space Physics, 950 km from the Globe, in Kiruna, above the Arctic Circle.”  From http://www.amusingplanet.com/2011/10/world-largest-scale-model-of-solar.html#more 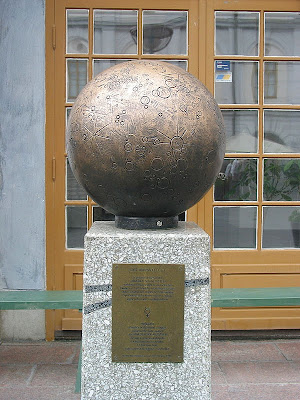 Mercury (25 cm in diameter) is placed at Stockholm City Museum, 2,900 m from the Globe.
At each planet station, exhibits provide information about astronomy and the natural sciences, and also about related mythology and culture. 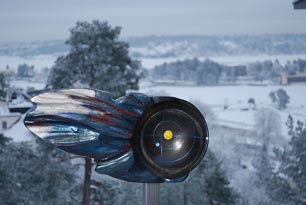 The Asteroid Saltis
Read more at:
http://www.amusingplanet.com/2011/10/world-largest-scale-model-of-solar.html#more
and
http://ttt.astro.su.se/swesolsyst/
I am dedicating this post to my brother Wayne, who is retiring today from his career as an aerospace engineer at NASA, after a number of very good years there.  YAY!
Posted by Map Monkey at 1:05 PM