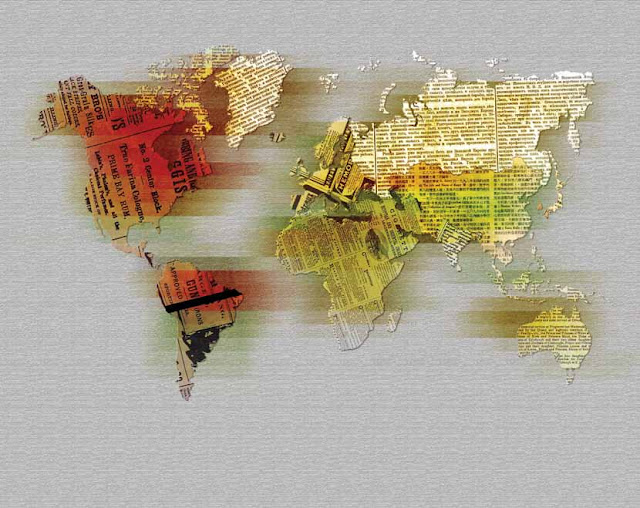 Mapping the “New World Order”
from: http://www.newgeography.com
Forget about “East” and “West;” forget about the Euro-zone;  forget about the so-called BRIC countries (Brazil, Russia, India, and China).  Here is the New World Order according to the New Geography people: based on shared cultural, almost “tribal” affiliations, we have the Anglosphere, the Sinosphere, and the Indosphere, among others.  Interesting demographic projections and theories, but lousy maps!  And what happened to the Arab/Islamic world?  Not a major player in this New World Order?  Talk about the original home of the “shared cultural/tribal affiliations”!!
The New Geography people (my favorite blogger frienemies) recently released a document called “The New World Order.”  http://nwo.li.com/book/index.html  It is quite interesting to read, although, as usual, I take issue with some of their interpretations of data and conclusions.  Also, a word of warning:  They love to map things, but they keep using this insane-looking Mercator projection for global-scale data.  I am beginning to think they do it in an ironic way, or else to prove that no left-leaning cartographers are going to make THEM give up their western imperialist perspective on the world!.  Another thing they do that bugs me: their choropleth maps very often show absolute numbers rather than percentages or ratios.  This is, of course, a very misleading way to present data on maps.
Having said that, though, the document is well worth a closer look.  The chapter titles give a pretty good idea of what the publication discusses in detail:
§  The New World Order: Mapping the Future
§  India Conquers
§  Inside the Sinosphere
§  Vietnam: The UnChina
§  The Anglosphere: We are not dead yet
§  Women’s Maps
§  Six Adults and One Child 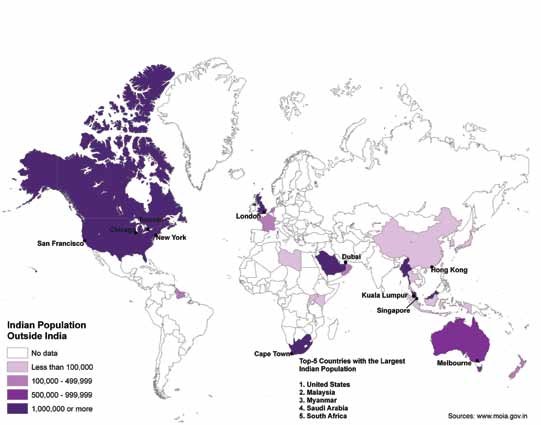 The Indian diaspora, from the chapter "India Conquers"
Most of this information has been reported in past months on the New Geography blog, but the new document puts it all together as a unified theory of how the economies and geo-politics of the world’s nations have aligned and re-aligned themselves since the end of the Cold War.  The way Joel Kotkin and his co-authors imagine it, the world is re-aligning itself based on shared cultural, almost “tribal,” spheres of influence.  See excerpt below from the Introduction chapter, and a selection of maps from some of the chapters.
“The fall of the Soviet Union nearly a quarter of a century ago forced geographers and policy makers to rip up their maps. No longer divided into ‘west’ and ‘east,’ the world order lost many of its longtime certainties.  In our attempt to look at the emerging world order, we have followed the great Arab historian Ibn Khaldun’s notion that ethnic and cultural ties are more important than geographic patterns or levels of economic development.  In history, shared values have been critical to the rise of spheres of influence across the world.  Those that have projected power broadly – the Greek, Roman, Arab, Chinese, Mongol, and British empires – shared intense ties of kinship and common cultural origins.  Of course, much has been written about the rising class of largely cosmopolitan “neo nomads”, who traipse from one global capital to another.  But, for the most part, these people largely serve more powerful interests based on what we may call tribal groupings: the Indian sphere of influence, the Sinosphere, and the Anglosphere.
Our approach departs from the conventional wisdom developed after the Cold War.  At that time it was widely assumed that, as military power gave way to economic influence and regional alliances, the world would evolve into broad geographic groups.  A classic example was presented in Jacques Attali’s Millennium: Winners and Losers in the Coming World Order. Attali, a longtime advisor to French President Francois Mitterrand, envisioned the world divided into three main blocs: a European one, centered around France and Germany, a Japan-dominated Asian zone, and a weaker United States-dominated North America.  Time has not been kind to this vision, which was adopted by groups like the Trilateral Commission.  The European Union proved less united and much weaker economically and politically than Attali and his ilk might have hoped.  The notion of Japan, now rapidly aging and in a two decades long slump, at the head of Asia, seems frankly risible.  Although also suffering from the recession, North America over the past quarter century has done better in terms of growth and technology development, and has more vibrant demographics than either the EU or Japan….
[T]he Indian and Chinese spheres are united by deep-seated commonalities: food, language, historical legacy and national culture.  A Taiwanese technologist who works in Chengdu while tapping his network across east Asia, America, and Europe does so largely as a Chinese; an Indian trader in Hong Kong does business with others of his “tribe” in Africa, Great Britain and the former Soviet Republics in east Asia.  Beyond national borders, these spheres extend from their home countries to a host of global cities, such as Hong Kong, Singapore, London, New York, Dubai, San Francisco, and Los Angeles, where they have established significant colonies.  The prospects for the last great global grouping, the Anglosphere, are far stronger than many expect.  Born out of the British Empire, and then the late 20th Century, the Anglosphere may be losing its claim to global hegemony, but it remains the first among the world’s ethnic networks in terms of everything from language and global culture to technology. More than the Indian Sphere and Sinosphere, the Anglosphere has shown a remarkable ability to incorporate other cultures and people.  In the future, we will see the rise of other networks, as well.  An example would be the Vietnamese sphere of influence, which reflects both the rise of that particular Asian country, and the influence of its scattered diaspora across the world.  Culture is key to understanding the Vietnamese sphere: the country’s history includes long periods of Chinese domination that made it resistant to being absorbed into the Sinosphere. Instead, as we argue, Vietnam is likely to be more closely allied, first and foremost, with the United States and its allies.
Finally, our maps deal with basic demographic issues that will dominate the future.  We trace the global rise of women to prominence in business, education and politics.  Although Western nations still lead in female empowerment, we argue that the most significant changes are taking place in developing countries, notably in Latin America.  It will be these women – in Sao Paolo, Mumbai, and Maseru – who increasingly will shape the future female influence on the world. Yet this positive development also contains the seed of dangers.  Female empowerment, along with urbanization, has had a depressing effect on fertility rates, seen first in the highly developed countries, and now increasingly in developing ones.  Looking out to 2030, many countries, including the United States and China, will be facing massive problems posed by too many seniors and not enough working age people.  As has always been the case, the emerging world order will face its own crises in the future, with, no doubt, unexpected, unpredictable results.  But our bet is solidly on the three spheres of influence which constitute the bulk of this report.”  Text, maps, and graphs from:  http://nwo.li.com/book/index.html 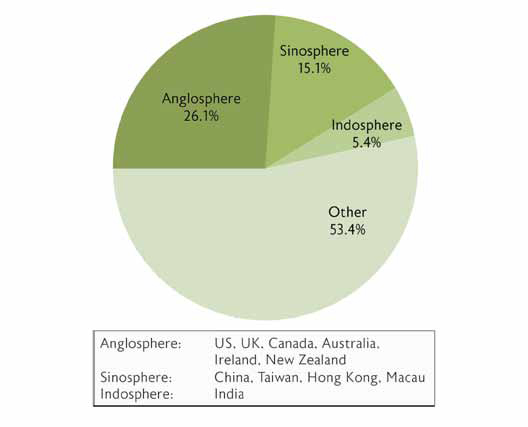 Anglosphere, Sinosphere, and Indosphere: Share of the world's GDP, 2010 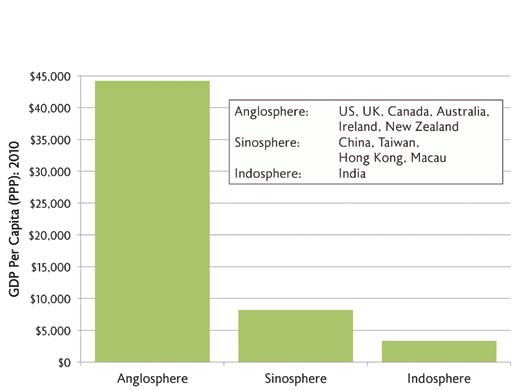 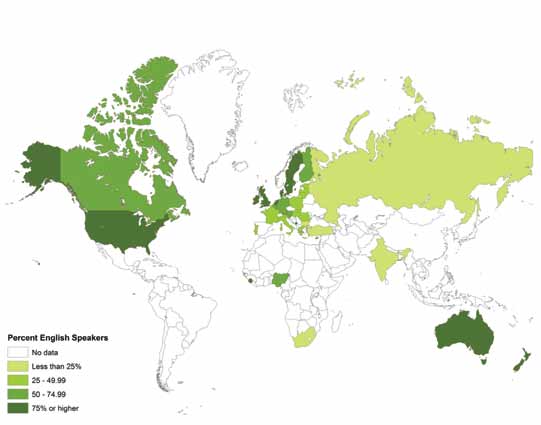 The linguistic influence of the Anglosphere 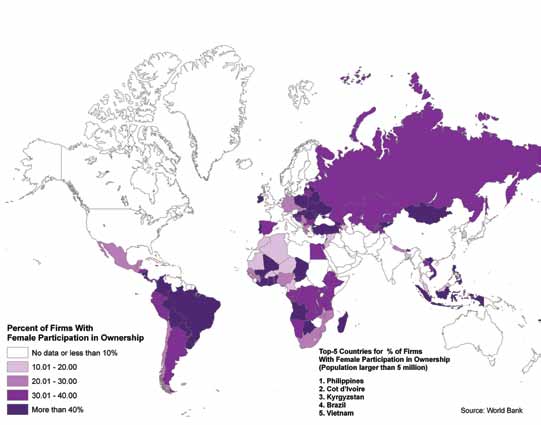 A surprising depiction of female entrepreneurship. 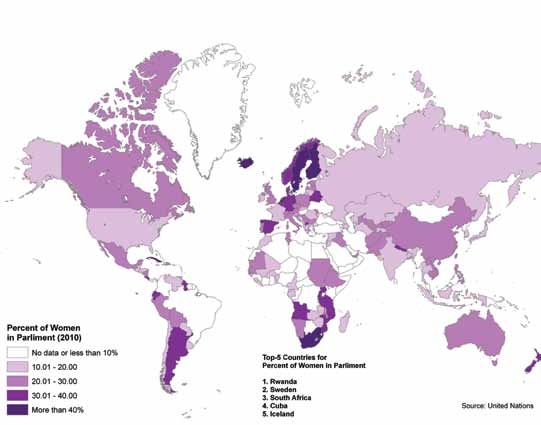 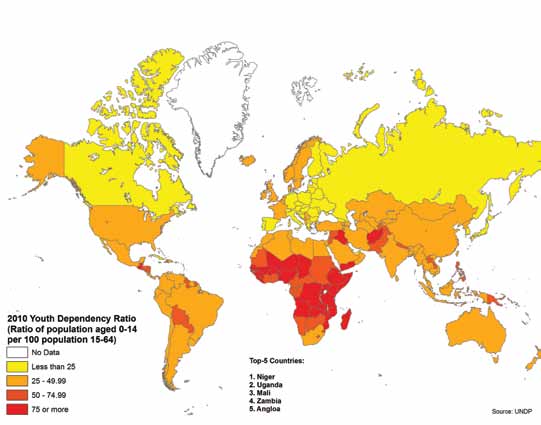 Countries that are colored in a darker red have a ratio of fewer adults per child.
Posted by Map Monkey at 11:57 AM