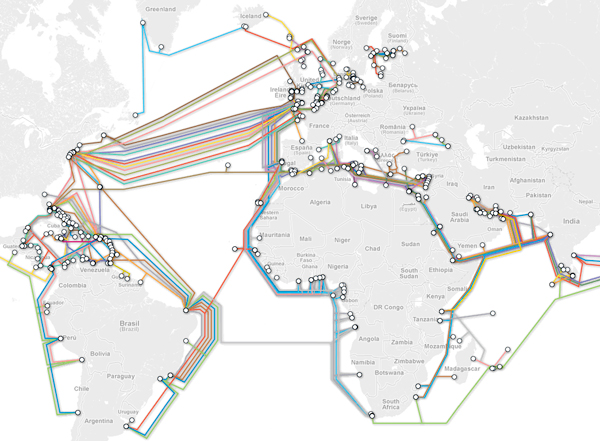 The Internet’s Underwater Paths: Interactive map.  (Image: TeleGeography/2011 PriMetrica, Inc./Global Bandwidth Research Service/Europa Technologies/Geocentre Consulting/INEGI/Tele Atlas/Google)
“Ever wondered how your email can cross the vastness of the ocean and be delivered almost instantly, anywhere in the world? It's all down to a network of fibre-optic cables that link up the continents and transmit terabits of data every second.
Thanks to TeleGeography, a US telecommunications research firm, you can now view these submarine cables on an interactive map and get a sense of the physical infrastructure that keeps the internet going.
The map shows 188 active and planned submarine cables, along with their landing points. Clicking a cable gives you more information, such as its name, its length, who owns it and where it meets land. Clicking a landing point will also tell you which cables terminate at that location.
The map is only a stylised representation, so the real cables and landing points may lie in slightly different locations.  That should protect cables from thieves, who have caused communications outages in south-east Asia, but it won't help ships avoid breaking cables by dropping anchor.” From: http://www.newscientist.com/blogs/onepercent/2011/09/interactive-map-shows-the-inte.html
Now that I am far away from most everyone I know, and communicate mainly through the Internet, this has taken on more than the usual importance for me! 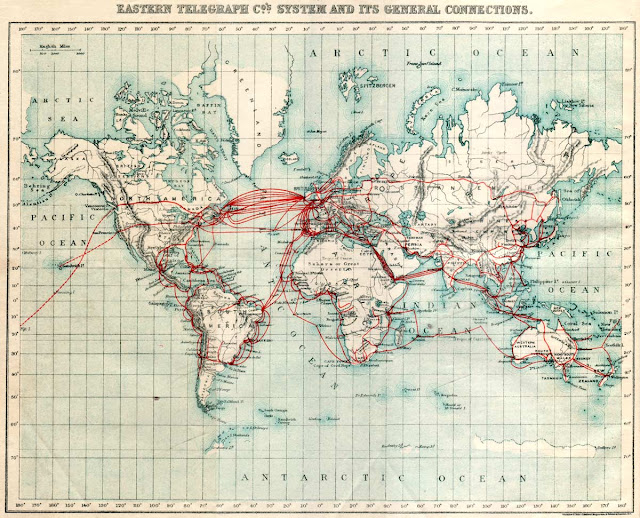 The Internet cable map bears a startling, but, I suppose, somewhat unsurprising, similarity to this much older (110 years older!) map of telegraph lines under the oceans.
Posted by Map Monkey at 2:12 AM