Map of the Week – 1-30-2012:Great Britain-Her Natural and Industrial Resources 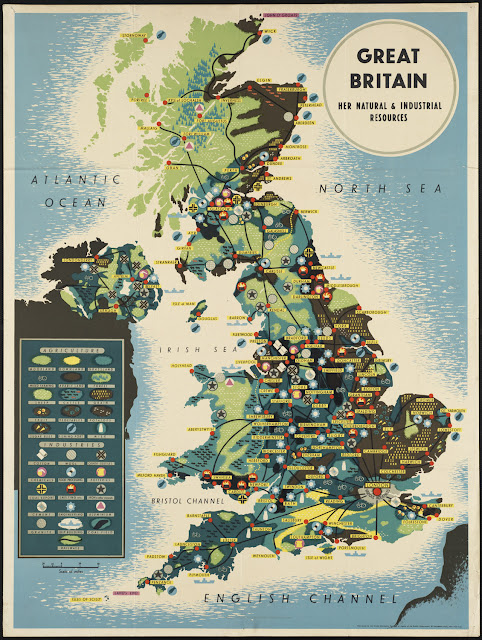 Great Britain – Her Natural and Industrial Resources, from
http://www.flickr.com/photos/boston_public_library/3531527882/sizes/o/in/set-72157618058787787/
This is an attractive early infographic, created and published in New York City, and distributed by the British Information Services, an agency of the British Government, in about 1939.  The map is at the scale of 1:1,100,000, and an original is held now by the Boston Public Library.  The University of Miami’s map collection also has a copy.

The map is a bit cluttered, (there is apparently a lot going on in Great Britain in the pre-WWII era) but by a careful back-and-forth with the legend, it is fairly easy to apprehend what is being depicted.  I also note the way Great Britain is referred to as “her”!  We don’t see that very often now-a-days anymore!

I include a blow-up of a section of Scotland, showing all the variety of industries and agricultural pursuits in the Glasgow area, where I now reside.  There was smelting, coal fields, coal export, chemicals, cement, food processing, fishing, cattle raising, cotton, wool, engineering, and of course, ship building.  The Glasgow area produced most of the ships built for the British Navy during WWI and WWII, and the decline of ship building after the war ended was one of the major blows to Glasgow’s economy and strong tradition of working class trade unionism.
Historically, engineering was an incredibly vital part of the Glaswegian economy, and had been for centuries.  Think James Watt (steam engine), and Alexander Graham Bell (telephone), to name a few.  (See http://www.magicdragon.com/Wallace/thingscot.html and http://en.wikipedia.org/wiki/Category:Scottish_inventions for a more complete and very impressive listing of Scottish inventions and discoveries, which include penicillin, RADAR, the field of thermodynamics, cloned sheep, television, anaesthetics, and the hypodermic syringe, among dozens of other things).  Not only ship-building, and everything connected with ships and navigational equipment, but also the design and construction of train locomotives were huge industries here. In fact, engineering and industrial design was such a mainstay of the economy that “Clyde Built” became a slogan appended with pride to things produced in the Glaswegian region of the River Clyde, and it was a catchphrase that was understood around the world as indicating that the product was well-designed and well-made, to the highest available standards.
Textile manufacturing was the other extremely important industry in the Glasgow region for several centuries, even prior to the 20th when this map was created.  Wool and cotton were processed and woven here, and Glasgow and several nearby towns were centers of textile production famous the world over.  The town of Paisley produced cottons popularizing the paisley design, with the Scottish town giving its name to the distinctive amoeba-like motif originally created in India and Persia.  At first the cloth was imported from Asia via the East India Company, but supply couldn’t keep up with demand, so it began to be manufactured locally in Scotland.  Although it was originally woven, later on the paisley designs were printed, which made the cloth even less expensive and more affordable for mass production and consumption.  In the early 19th century, over 100,000 workers were employed in the cotton mills, over 70% of them women and children.
Raw cotton from the Americas was one of the commodities that made Glasgow’s “Tobacco Lords” wealthy in the 18th and 19th centuries, and in fact was one of the impetuses for Scotland finally agreeing to a Union with England in 1707.  The English Government’s Navigation Acts prohibited Scots from trading directly with England’s new colonies, prior to American independence.  Scotland’s Union with England would allow Scotland to trade directly with the American colonies, especially in cotton, tobacco, and sugar, the most profitable commodities.  As opposed to most merchant endeavors involved in the “triangular trade” between European ports, Africa, the Caribbean, and mainland North America, Glasgow (unlike Liverpool, for instance) did not play an active part in the transport of slaves.  However, the Scots were very involved in plantation crops – cotton, tobacco, and sugar – and many Scots owned numerous plantations, especially in the Caribbean.  “By all accounts, the Caribbean plantations were the most inhumane; the owners preferred ‘salt-water slaves’ – straight from the ship – who they would work to death before buying a new consignment.  The horrible truth is that much of the money made through the work of slaves financed the making of Glasgow as a major industrial centre.” From “The Tears that made the Clyde: Well-being in Glasgow,” by Carol Craig, 2010, Argyll Publishing.
During the American Civil War, the continued importation of cotton from the southern United States into Glasgow helped the Confederate cause.  In fact, the roles of shipbuilding and cotton importation in Glasgow were intertwined during the American Civil War.  Glasgow’s shipyards produced the world’s fastest steam-powered ships, called runners, which were very successful in out-running President Lincoln’s naval blockade of the southern states’ coastlines.  The South had few of the industries needed to equip and support armies of half a million men.  Despite the stereotype of the Confederate army as being poorly-clothed and under-equipped, they were often better clothed and armed than their Northern counterparts, due to the help of the Glaswegians.  Because the Glasgow ships could get through the blockade, they were able to supply the southern states with much-needed goods for the army, including rifles, munitions, and finished clothing, and in turn take the cotton produced in the south to market in Europe, whereas otherwise it wouldn’t have reached buyers.  Even though the Glaswegian merchants were on the losing side of the war, they still made enormous profits from their undertakings.  Glasgow profited from supporting the South in this war, and thereby supported slavery.  Cotton prices in Europe had skyrocketed, a bale of cotton could be bought for £15 in the American South and then sold in Liverpool for £75.
“While America tore itself apart, fortunes were made by the Clydeside shipbuilders and brokers building ships to beat the blockade.  At the height of the boom in 1864, Warner Underwood, the US Consul in Glasgow, complained that an astonishing 27 Clyde yards were employing 25,000 men and boys building no less than 42 large runners.  The cash rewards for the Scots were phenomenal.  It was calculated that the sum total spent on building and refitting blockade runners up to 1864 was £1.4 million (£140m in today’s money) – a third of which was pure, war-inflated profit.”  From http://history4everyone.wordpress.com/2011/04/10/scotlands-role-in-the-american-civil-war/
King Cotton and His Retainers: Financing and Marketing the Cotton Crop of the South, 1800-1925, by Harold D. Woodman, 2000,  Beard Publishers.  For more on the British collaboration with the Confederacy, see Guns for Cotton: England Arms the Confederacy, by Thomas Boaz, 1996, Burd Street Press.
Posted by Map Monkey at 4:00 AM