One Year Anniversary of the Geographer-at-Large 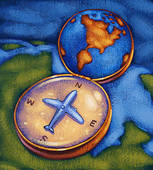 One year ago, on January 2nd, 2011, I had a brainstorm -- born of a boring day-after-New-Year’s-Day -- to start a blog about mapping, GISc, and geography in general.  Most people make harmless and impossible-to-keep New Year’s resolutions about losing weight and quitting smoking, but I made a vow to WRITE MORE!  As if I don’t write enough already for my job!  I didn’t know what I was doing, and I certainly didn’t know what I was getting myself into!  I never paid that much attention to other people’s blogs, and so had no extensive body of knowledge to draw upon.  I more or less invented (or re-invented) things as I went along.  Setting up the blog design was an adventure, but finding material was easy.  It’s all stuff I’m interested in anyway, so it’s just pure fun for me to put together the posts.  I suppose when it starts feeling like real work I will have to cease and desist, and I know many bloggers start off enthusiastically and then a year or so down the road get tired and disillusioned with it.
That’s one of the reasons that I keep doing these “milestone” posts – just to remind myself, if no one else, why I am doing it, and give a little progress report on how it’s going from my point of view, and also from the points of view of some of my readers who have been kind enough to send me comments and offer encouragement.  So, I have done a one month milestone post (getting to one month of blogging was something of a triumph for me!); a six-month milestone post; a 100-posts milestone post; and now this one-year anniversary post.  I can promise you, I won’t do anymore milestone posts for quite a good long while.  Maybe at the 500-post mark, or even the 1000-post mark.  We shall see!  For this past year, I have been averaging a bit more than 11 posts per month, but this varies significantly, depending upon my time commitments at the moment (you know, REAL work, family, health, travel, and home obligations).
One of the things people have told me they like about my blog is the variety of the posts – I don’t really focus on a too-narrow range of topics, but meander all over the realm of geography (which is to say, the realm of everything, just about!).  I have always been a meander-er, much to the dismay of some of my Ph.D. advisors and graduate school professors.  One actually wrote on one of my papers that my writing “meanders more than the Mississippi River near New Orleans.”  Since I love that part of the world, I was not too insulted by that remark, even though I knew that in academia it is the kiss of death not to be succinct, dispassionate, and to offer no more than bare-bones expository writing.  I am verbose.  I don’t apologize for it.
A few honest readers have told me they just don’t have the patience to read some of my more lengthy posts, and I understand that in this Internet age, with Twitter, texting, and what-not, people’s attention spans are tiny and getting tinier, and abbreviations rule.  Fully spelling out whole words?  Writing in complete sentences?  Digressions and side bars?  So passé!  Readers crave the short and sweet.  It’s hard for me to do the short and sweet, since there is so much interesting background to every story.  I always figure that if I’m interested in something, then it is bound to be equally fascinating to others, as well, but I have come to realize that it may be fascinating only to those others sharing my slight tendencies towards the "Medici effect" (being insanely interested in EVERYTHING, sometimes known as being an “intersectionalist.”  It’s like Asperger’s but without the social adjustment and repetitive movement issues. The term probably derives from the association between the Medicis and the idea of the Renaissance man).  Part of being one of these insane intersectionalists is the need to spread the word – we are incorrigible educators or would-be educators, and feel compelled to turn everyone else on to these terrifically interesting concepts and connections.  And then we are amazed if the rest of the non-Medici world resists.  Ah, well.  True confessions time.  Maybe there should be a 12-step program for Interested-in-too-many-things addicts. 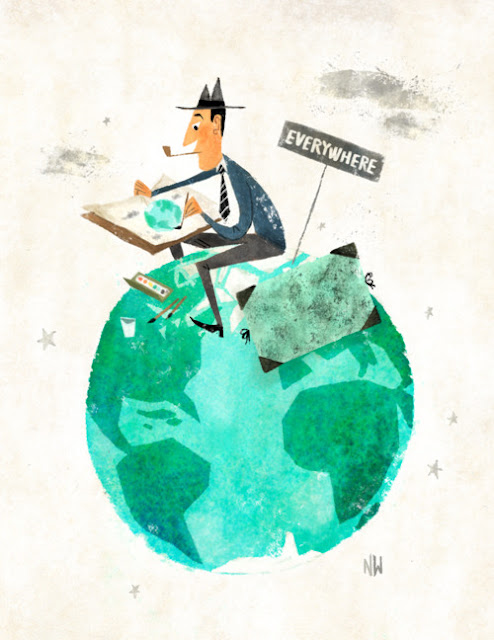 Miroslav Sasek, 1916-1980
So, in the spirit of my previous milestone posts, I will list the most popular posts to date, the countries with the highest numbers of visitors to my blog, the individuals with the highest number of pageviews, and the ever-popular funny Google search terms that have led to my blog.
I have gotten over 100,000 page views in my first year, most from the United States, with the U.K., Canada, Germany, Australia, Greece, France, Japan, India, and the Netherlands rounding out the Top 10 countries.  Last January, 2011, the blog's first month, I had around 1,500 page views for the month, and I was thrilled.  In December, 2011, I had almost 20,000 for the month (and I was thrilled again).  The blog has been read (or at least looked at) by people in 170 countries or sovereign territories, including some that were still hold-outs as of my last milestone update in September: Uzbekistan, North Mariana Islands, Liechtenstein, Dijbouti, Faroe Islands, Myanmar, Reunion, Bhutan, San Marino, Syria.  Still waiting for East Timor, Gibraltar, South Sudan, Vanuatu, Vatican City, Andorra, Cuba, and many of the central African countries.
Here are the Top 10 posts of all time, based on number of pageviews.  These posts span in time from January, 2011 to October, 2011, and nearly every month is represented:
Unconventional (yet informative!) Maps of the Big Apple...
Anthropomorphic and Zoomorphic Satirical Maps:#2
Anthropomorphic and Zoomorphic Satirical Maps:#3
Fun with Map Projections, Oblique Case
Rediscovering African Geographies
WTF is This? Bad Maps!
Freedom Riders, 1961
100 Years Later: Triangle Shirtwaist Factory Fire,...
Mapping the History of Poverty
Re-Regionalizing the American Continent
Here are my current Top Visitors (not listed in any particular order of pageview numbers, but each one has more than 50 page views):
Ile-de-France, Paris, France
Ohio, Cincinnati, USA
New York, New Rochelle, USA
New York, Forest Hills, USA
Abu Dhabi , Al Ain, United Arab Emirates
California, Fullerton, USA
Arizona, Scottsdale, USA
Berlin, Germany
Johannesburg, South Africa
Athens, Greece
Istanbul, Turkey
Roskilde, Denmark
Belgrade, Serbia
And here are some of the more odd-ball Google search terms, with my (hopefully) pithy comments appended:
Evil Mercator [OK, I know we all love to demonize Mercator’s projection, but I draw the line at thinking of the man himself as “evil”!]
Albanian Evil cartoon [not at all sure what this one is about, but there was a run on “evil” search terms at one point]
elleanor roosevelt visting the minority in africa map [she was visiting white people in Africa?]
hilarious world map [yes, because it’s such a hilarious topic!  btw, they matched this up with the politically-incorrect maps in my blog posting http://geographer-at-large.blogspot.com/2011/01/year-in-maps-part-2.html]
afghan tortoises habitat on earth [because we KNOW that Afghan tortoises are also on Venus and Mars! This person wants to see ONLY the habitats on Earth, please]
hispanic rate going up in us [it makes “Hispanic rate” sound like it's measuring a disease!]
asia map with segregated borders [I’m still trying to work out how borders can be segregated.]
typography of expansion [this actually sounds very interesting, but I have no idea what it could mean]
madworld mappa mundi [this sounded interesting, so I actually googled it myself.  What came up was just a bunch of sites that were selling books that happened to have either the “madworld” or the “mappa mundi” terms in their titles.  Disappointing.  Not sure how it led to my blogsite, exactly.]
hooverville it seems there wasnt any depression at all [yeah, right! Tell that to the people living in the Hoovervilles!]


[And here are three that I don’t even know what to say about, except: HUH???]


the map like are world with roads;
borders region and hating each other;
random
Thanks to all my loyal readers and even to the others who just stop by to grab a map or photo but might stay to actually look more in-depth at a post.  And thanks especially to my friends, family, and students who send me interesting maps and articles that I then turn into blog posts. Keep 'em coming!  As I start my 2nd year of blogging, I will be doing so from a new location (a new geographic location, NOT a new cyber-location - blog address remains the same).  It is safe to say that the topics covered in my blog might reflect this geographical shift, or maybe not!  Time will tell.  I imagine that there might be a temporary slow-down in my posting, while I get settled, but then again, maybe not!  In any event, as I like to occasionally intone in a somber voice at times of transition and unknowable futures: ALL WILL BE REVEALED! 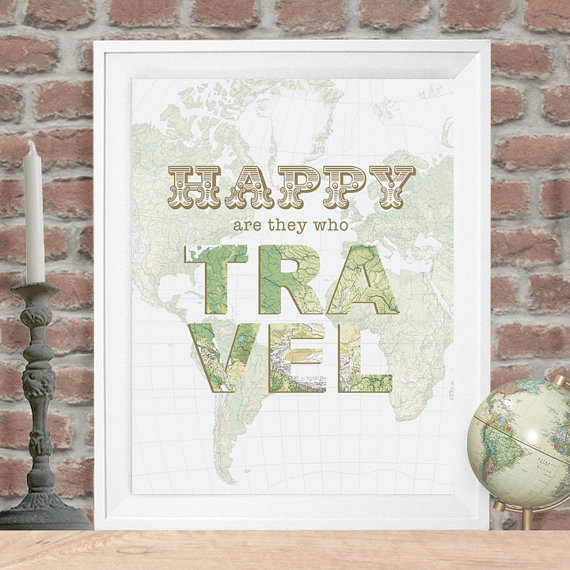