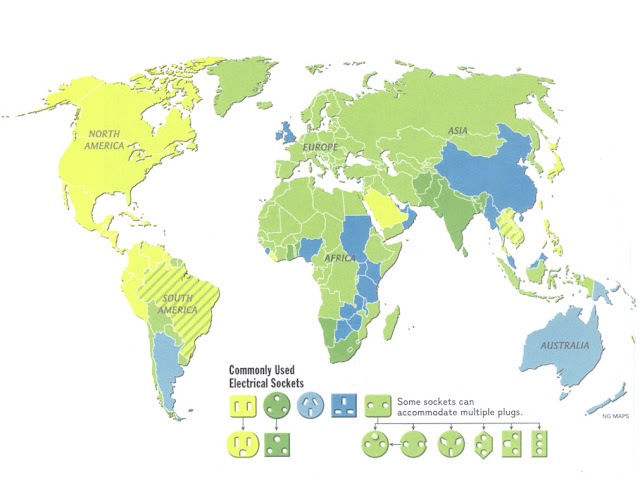 Commonly Used Electrical Sockets around the World, from http://bigthink.com/ideas/40910
So you can see what is on my mind after this move to a different continent/country/SOCKET ZONE!!!!
PLUGS!!!!  As anyone who has traveled to a different country knows, you usually are not going to be lucky enough to be able to use your existing electrical appliances without some help from adaptor plugs.  I had gotten spoiled by all my travels from the US to Jamaica, which uses the same type of electrical outlets as the US (as well as using a US-model, civilized three digit telephone area code with a 7 digit number, not like this insane UK system where you have to know when to drop the leading zero of a phone number, and everything is different depending whether you are calling from a landline or a mobile phone, but that’s another story!).  When I was in Morocco last year, I had a big problem with the plugs and outlets, and my laptop was effectively useless after it ran out of battery power.  I had dozens of little adaptor plugs with me (I had bought a whole contingent of them, seemingly every possible configuration) but none of them worked.  The hotel seemed to have its own personal standard of socket, which worked with nothing I had.  I even had brought a little step down transformer with me (or probably I mean a step UP transformer) but no dice, couldn’t get the juice to power my gizmos.
Since I was in the UK during last summer, I knew that I had all the right adaptors, and that all my necessary electronic devices were 110/240 volt compatible (OH, yes, that is another whole scenario – making sure you have the right voltage, otherwise your device – or you! - can fry, even if you have the right adaptor to plug into the socket!)  Although this time I did bring one adaptor plug with me for my laptop, I realized that it was inconvenient to keep switching back and forth whenever I needed to use another appliance (camera battery charger, cell phone charger, hair dryer, etc.).
I had to go out and forage for more adaptor plugs!  I came across an electronics shop selling adaptor plugs to transform a US plug so as to be compatible with a UK outlet, but unfortunately, they were out of the simple kind.  The only kind they had (which in my desperation, is what I ended up buying) was a universal adaptor plug.  It is actually very clever.  It has all these little pins and metal bits that you can pull down and slide out from the main plug housing (which is gargantuan) depending upon what country you are in and where you are coming from.  Supposedly it will accommodate nearly every possible permutation of plug types going in and socket types being plugged in to.  The only issue is that it is HUGE!  No lie, it protrudes from the wall at least 6 inches, maybe more, after your device is plugged into it.  But nevertheless, IT WORKS!
Why does the world need so many different types of plugs and sockets, you might well ask.  Well, there is an amusing little article about this very topic that helps to clarify the historical background of this insanity, called “Gizmodo explains why every country has a different fucking plug.”  http://gizmodo.com/5391271/giz-explains-why-every-country-has-a-different-fing-plug
Apparently there are about 13 different plugs in general usage throughout the world.  At least now the Eurozone is more or less standardized onto the same plug, which was decidedly NOT the case when I traveled around dozens of European countries on a Eurail Pass in my salad days.  At least we didn’t have to lug around computers and digital cameras back then, but there were still the all important HAIR DRYERS!!
Gizmodo says, by way of explanation as to WHY so many different sockets, and who ended up with what, “Basically, the best way to guess who's got which socket is to brush up on your WWI/WWII history, and to have a deep passion for postcolonial literature. No, really…”
And they conclude by saying it probably isn’t going to change any time soon, owing to the number of sockets extant in the world, and the investment this represents.  “Your Walmart shaver will still die if you plug it into a European socket with a bare adapter, Indians will still be reminded of the British Empire every time they unplug a laptop, Israel will have their own plug which works nowhere else in the world, and El Salvador, without a national standard, will continue to wrestle with 10 different kinds of plugs.”

This map shows similar information as the one above, but actually indicates a higher level of complexity than the more simplified map.  Things are not so straightforward in the real world, as I can vouch! 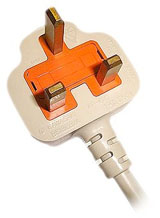 The British Plug – a gargantuan three-pronged beast! With a fuse built right into it, it is one of the world’s weirder plugs.  (see “Type G” plug on the map above.)  If you are in Nigeria or the parts of Africa that comprise Cecil Rhodes' old "empire" ("from Cape to Cairo") then you are in luck with this British plug.  Otherwise, not so much. 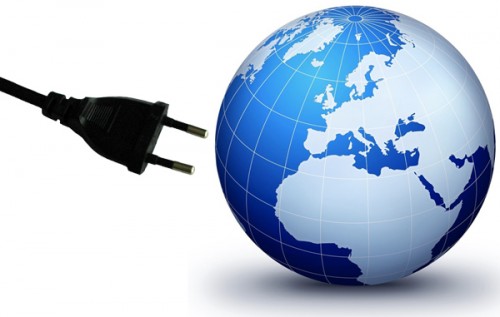 Sockets of the World – UNITE!
Posted by Map Monkey at 4:21 AM