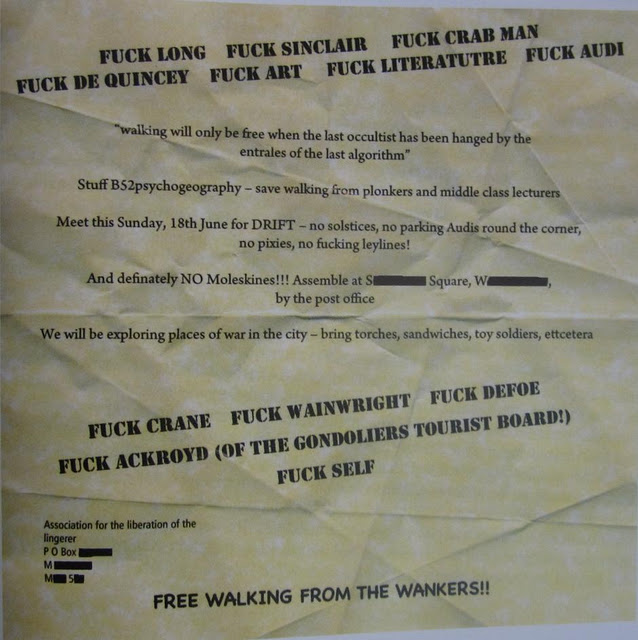 From the "Association for the Liberation of the Lingerer" an advert flyer for Wanker-free "drifting"
http://cryptoforest.blogspot.com/2011/12/mythogeographic-wanker-free-drifting.html
Thought you might be interested in whatever it is these psychogeographers get up to these days! Interesting!  Was a little mystified by their vehemence against "moleskins," which, since the writers are clearly Brits of some stripe, I took to mean what we would call "bandaids."  So it MIGHT mean that, or it might mean a kind of new fancy diary/journal/city map/notebook, called "Moleskines."  Sort of like the old Filofaxes were in the 1980's: no self-respecting yuppie would be without one.  I guess either way it makes sense.  They don't want any tender-footed, map-toting, journal-scribbling posers on their "drift." Crazy-ass dudes. HA HA!
I ask you, is this the modern-day incarnation of Le Flâneur? It would seem so, by their own name: "Association for the Liberation of the Lingerer."  (See a previous post about Flâneur-ism at
http://geographer-at-large.blogspot.com/2011/08/le-flaneur.html, and also a recent post on emotion-mapping and psychogeography at http://geographer-at-large.blogspot.com/2011/10/map-of-week-10-3-2011-emotion-mapping.html)
This photo of the flyer is from a book called Mythogeography, by Phil Smith.  I haven't read it as yet. See a short review below. 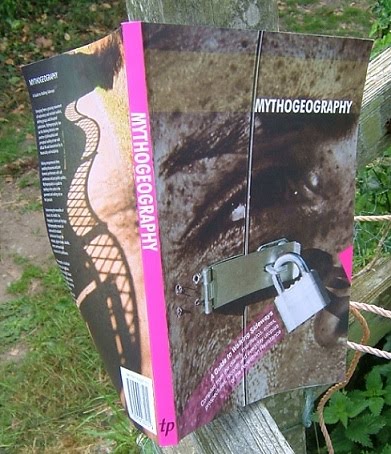 “...quite possibly the strangest book I have ever read. Partly novel, and partly philosophical treatise, the book is a sort of field guide to exploring and interacting with urban and rural environments. It’s informative and witty, but mostly a celebration of finding, or making, weirdness in the most ordinary (and extraordinary) places. There’s also a manifesto, but as Phil cheerfully admits it’s palpably impossible to follow.”
http://www.mythogeography.com/p/mythogeography-book.html
Here is the author's definition of Mythogeography:
“Mythogeography describes a way of thinking about and visiting places where multiple meanings have been squeezed into a single and restricted meaning (for example, heritage, tourist or leisure sites tend to be presented as just that, when they may also have been homes, jam factories, battlegrounds, lovers' lanes, farms, cemeteries and madhouses). Mythogeography emphasises the multiple nature of places and suggests multiple ways of celebrating, expressing and weaving those places and their multiple meanings.
Mythogeography is influenced by, and draws on, psychogeography – seeking to reconnect with some of its original political edge as well as with its more recent additions. While engaging seriously with academic discourses in areas like geography, tourism studies and spatial theory, mythogeography also draws upon what Charles Fort might have described as ‘the procession of damned data’. So, occulted and anomalous narratives are among those available to mythogeography, not as ends in themselves, but as means and metaphors to explain, engage and disrupt.”
Posted by Map Monkey at 1:05 PM