This plot shows the current extent and position of the auroral oval at the north pole, extrapolated from measurements taken during the most recent polar pass of the NOAA POES satellite. “Center time” is the calculated time halfway through the satellite's pass over the pole.  From http://www.swpc.noaa.gov/pmap/
As some of you are aware (i.e., Kristen Grady, who sent me the wonderful photos of northern Scotland’s sightings of the aurora) the high northern latitudes have been getting quite a display of the northern lights.  Unfortunately, I have not been privileged to see them here in Glasgow, possibly due to light pollution, cloud cover, or we are just not far north enough (hard to believe!).  It seems that many of the best sightings are quite a bit further north, and in more remote areas (the Orkney Islands, the Shetlands, Iceland, Norway, Alaska, Finland, Canada’s Northwest Territories, etc.) even though according to the Guardian’s Google mapping of sightings, many in the eastern UK and as far south as Margate, have also seen them, albeit as rather weak and ephemeral manifestations. I have seen them, many moons ago, in both Iceland's Faroe Islands, and northern Norway.
The aurora borealis has apparently been very strong for the past few nights, and covering more of the globe, due to the intensity of the solar storms occurring now.  This past week of geomagnetic storms has showered the earth with radiation, resulting in the incredible light show known as the Northern Lights.  (There is also a Southern Lights phenomenon, visible at the higher latitudes near the South Pole, as well as on other planets in our solar system.  Jupiter and Saturn have similar magnetic-pole based aurorae, and like Earth’s, they are powered by solar winds.)
The aurorae normally occur in a band 10 to 12 degrees from the magnetic poles, although during a geomagnetic storm such as in effect now, this zone can expand to lower latitudes.  The Aurora Borealis was named after the Roman goddess of the dawn (Aurora), and the Greek name for the north wind (Boreas).  The North American Cree people called them “The Dance of the Spirits,” and in the Middle Ages in Europe they were seen as a sign from God (of course!). 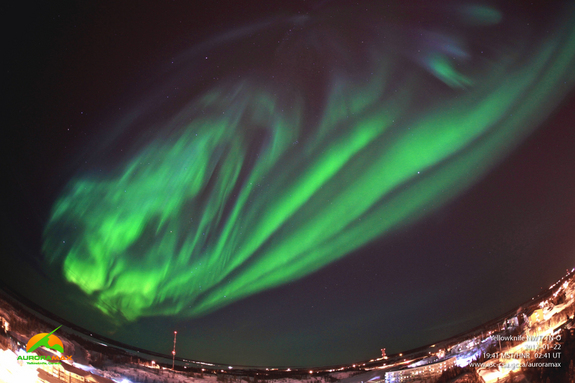 There is even a live webcam of the aurorae in Yellowknife, Northwest Territories in Canada, (Photo above) broadcast by AuroraMAX, which is a five-year educational initiative to raise awareness of the science of the Northern Lights, and how the Sun’s relationship with Earth can affect our daily lives.  AuroraMAX will allow skywatchers to follow the intensity and frequency of the aurora borealis leading up to Solar Maximum, which is the most active period of the Sun’s 11-year cycle (which produces the most active auroras), and is expected to peak in 2013.  http://www.asc-csa.gc.ca/eng/astronomy/auroramax/index.asp
And check this out!  The Guardian (UK newspaper) set up a Google map for people to enter their locations and photos of the northern lights.  Surprisingly, quite a few places in England and Scotland, but mainly on the east side of the island.  Also, the lights are not nearly as prominent as they are further north.
http://maps.google.com/maps/ms?msid=200650380302153043562.0004b7356ace24c4a5294&msa=0&ll=56.053635,-0.241699&spn=5.529729,16.907959 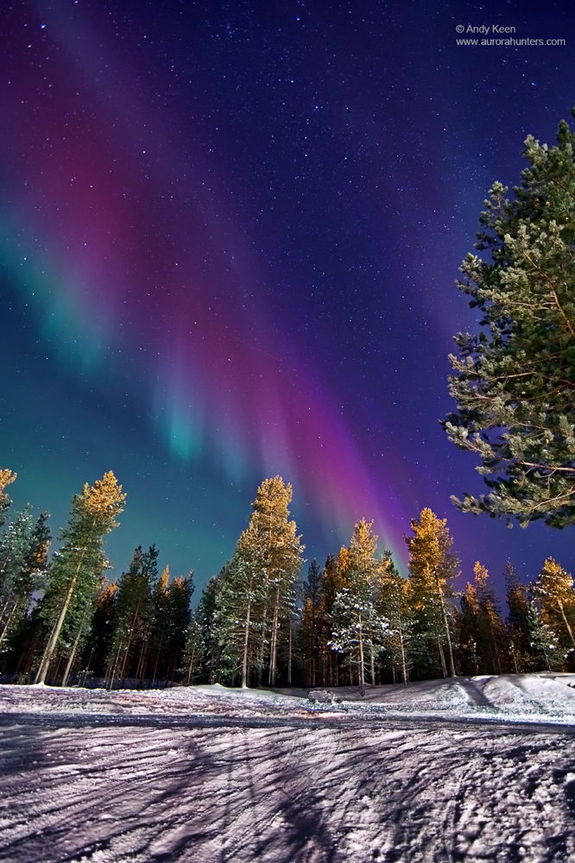 Great photos from all over! This one is from Ivalo, in northern Lapland, Finland.   http://www.space.com/14325-post-skywatching-photos-auroras-january-2012.html?kw=GPPC_Space
Some photos from Scotland:
http://www.pistonheads.com/gassing/topic.asp?h=0&f=109&t=1103231&nmt=
Photos of various aurorae (both southern and northern lights) from the space shuttle.  Astronauts can see the aurorae from both sides from the International Space station, etc.  http://www.geo.mtu.edu/weather/aurora/images/space/
Posted by Map Monkey at 6:34 AM