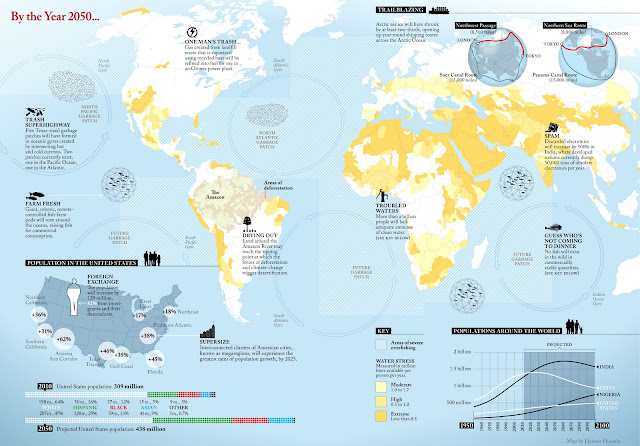 To ring in the New Year - Another great map graphic by Haisam Hussein - I'll be close to 100 years old by 2050, but this is what he projects the world will be like then.  Some good stuff, some bad stuff.  Check it out on the website above to see it in all its detailed glory.

The map's title reminded me of that old 1960's tune "In the Year 2525" with its very pessimistic, anti-technology lyrics.  Apparently, alot of people identified with the song's message, since the song shot up to #1 on the Billboard charts, and stayed there for six weeks, all through the summer of the 1969 moon landing and the Woodstock Music Festival.  It was a major part of the soundtrack of that summer, which is saying alot considering that many people believe that to be one of the best years for pop music, ever.  The words are in the same vein as another song from that general era, Eve of Destruction, also a bit depressing! Didn't mean to be a downer on New Year's!  HA HA!  But really, for a song written in 1965, (46 years ago!) when it did seem as though we were on the Eve of Destruction, I ask you: have things changed all that much....
OK, HAPPY NEW YEAR!!!

Check out the videos for a blast from the past!
In the Year 2525
http://www.youtube.com/watch?v=pc8mJU9OaRQ&feature=related
Eve of Destruction

And, just to end on a more positive (?Maybe?) note, here is a good info-graphic map on Pioneers of the Millennial World: The Most Innovative Countries and Technologies, from Reuters.  Some of this is rather surprising to me. 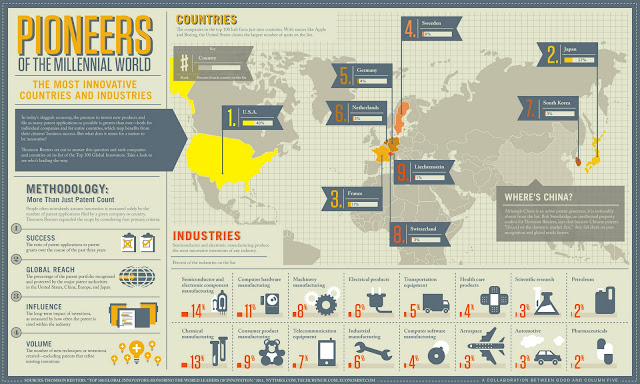